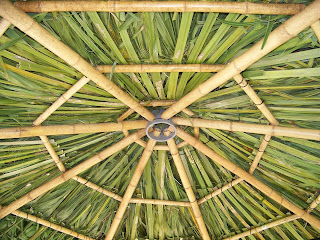 Until recently, I hadn't paid much attention to palms. I knew there were different varieties, each with its own characteristics, but that's about all I knew. I might have remained palm-ignorant if not for our newly constructed bamboo gazebo.

"I'd like to thatch the gazebo with palm leaves," I told Ralph at the project's beginning. "I've seen it done at a number of places, and it looks beautiful."

"But will it last?" Ralph asked rhetorically.

He was sure it wouldn't. I insisted it would. I explained how the Seminole Indians had been using palm fronds on chickee huts for hundreds of years. Thatched roofs, I had learned, not only stayed dry in downpours but often outlasted conventional roof coverings during hurricanes. I didn't succeed in convincing my skeptical spouse. Ralph refused to believe that a roof covered with leaves would work. After a while, I began to have doubts myself.

To seek alternatives, I went online and came up with two possibilities: a custom-made canvas cover and a Tahitian-style rain cape called a palapa. Both options had merits as well as disadvantages. The canvas cover wouldn't have the natural look I was after, and it was expensive. The palapa was aesthetically pleasing and a bit less pricey, but it wasn't durable. We'd have to replace it every year or two.

The more research I did, the more confused I became. I didn't know how we'd cover the gazebo until Ralph and our builder, Robbie, got talking.

"A long time ago, I thatched a roof out of palm fronds," Robbie told Ralph, "and it lasted for more than 14 years."

Robbie's revelation did what I was unable to do — convince my dubious spouse. The next morning, Ralph was eager to experiment with palm fronds.

"Why don't we try doing it out of palm leaves?" he suggested.

Suppressing the urge to shout, "That's what I said in the beginning!" I quietly agreed.

The next day we took a walk around the property looking for palms. Although our trees are predominantly oaks, pines and bamboos, a few palmettos dot the landscape.

We noted where the palmettos were growing, cut a few fronds and brought them back to see if Robbie could use them. That night Ralph made some calculations. To cover a 14-foot-diameter roof, we'd need about 700 palm fronds. On our property, we have less than a dozen small palmetto bushes. Clearly, I needed to discover some new sources.

After Robbie gave us the go-ahead, I began searching for suitably sized palmetto fronds. What I discovered was a wide variation in both stem thickness and leaf spread. Some palms have broad stems, while the stems of others are too slender to secure with screws. Still other varieties have stalks with needle-sharp spikes or sawlike teeth. Because I was looking for a pain-free experience, I concentrated on spike-free scrub palmettos.

Sabal etonia is a low-growing palm with fan-shaped leaves that spread about 3 feet wide. Native to Central Florida and prolific in undeveloped areas, the palm has a thick stalk that extends through the middle of the leaf section, providing a thick, sturdy arm quite suitable for securing to roofs.

It took about 20 hours to gather, set in place and secure all the palm fronds we needed to cover our roof. The finished product looks beautiful, smells wonderful and even sounds nice in a breeze. During a recent daylong downpour, the thatched roof effectively shed water, proving to skeptics like my husband that a leaf roof can keep an area dry.

I'm delighted with how things worked out. In my house of bamboo and leaves, I've found an easy peace, an escape from the stress of everyday life. When I'm sitting beneath the gazebo's thatched roof, I feel like I'm inside an upside-down bird nest, as interwoven with nature as the palm leaves are with one another.

In the course of a few weeks, I've been transformed from a person who ignored palms to someone fascinated by this lowly plant's many attributes. When I drove to town this morning, I kept noticing how many palms I passed. My eyes may have registered beauty, but my mind was of a different bent. It was cataloging sources for future frond-foraging trips.