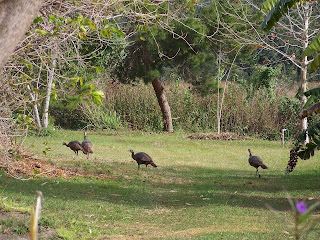 On the first day of 2010, a flock of wild turkeys wandered out from under the banana trees and headed up the hill toward the citrus grove. I was in the kitchen looking out the bay window. At first I saw one turkey, but by the time I grabbed my camera and slipped outside, three more birds had appeared.

Wild turkeys, Meleagris gallopavo, are one of nature's success stories. Rather than declining in numbers, turkey populations have increased gradually over the past 80 years. That wasn't always the case. In the early 1900s, hunters had killed so many gobblers that the species was on the brink of extinction.

Things changed in 1937 with passage of the Pittman-Robertson Act, which imposed an excise tax on sporting arms and ammunition to help pay for wildlife restoration. Once preservation efforts were in place, turkey populations rebounded. Today more than 7 million birds wander the woods and fields of North America.

Florida is home to the Osceola, one of five subspecies of this native North American game bird. The four turkeys I saw appeared to be females. Males, called toms, have distinctive spurs on their legs and beards — tufts of modified feathers — growing out of their chests. I didn't notice either feature on the birds I observed, which led me to believe they were all hens. All four were a similar size, about 30 inches tall. Males tend to be larger than hens, weighing a good 10 pounds more than their 8- to 12-pound counterparts of the opposite sex.

It puzzled me that I saw only females. Because this was only the second time in 19 years that I had spotted turkeys on the property (and the first time occurred only a couple of weeks earlier), my knowledge of turkey behavior was limited. To learn more, I explored online sources such as the National Wild Turkey Federation and the Florida Fish and Wildlife Conservation Commission. From those sites I discovered that before mating, female turkeys segregate themselves from the flock and gather in small groups. Because mating season for Florida turkeys begins in February, it may be that the flock of hens I saw was exploring our property in search of potential nesting sites.

Whatever their reason for passing through, I was elated to observe turkeys on our property. In the past few years I've seen more wild animals than ever before. In 2009, in addition to the usual suspects — armadillos, raccoons, rabbits, squirrels and possums — I observed coyotes, bobcats, foxes and otters. Ralph and I watched turtles lay eggs and a pair of sandhill cranes raise babies.

During our walks we've encountered numerous snakes, spiders and butterflies. One day a peacock wandered through our nursery, and every night an osprey roosts on a perch my husband placed in the middle of the lake. Water birds feed daily on fish in our lake, and songbirds flit from one flowering plant to another.

In early spring we enjoy the song of whippoorwills, and I'm always attentive to the cries of hawks, nightjars, killdeer and kingfish. We even have a resident pair of screech owls who (hoo?) annually nest in an old mailbox mounted beneath the porch eaves. I love the menagerie of critters that wanders through our property, and I was delighted to have a flock of turkeys join the parade.

When we bought the land in 1991 it was raw and barren. Over the years we've worked hard to repair damage done by a peat-mining operation. We've nurtured the soil, replanted the land and resculpted its contours. Our plan has always been to create an oasis for people and a sanctuary for wildlife. On many occasions we've wondered why we chose such a huge project, but then a flock of wild turkeys wanders by and the reason for our undertakings seems suddenly clear.

There are many ways to measure success. For Meleagris gallopavo Osceola, success can mean the resurgence of a breed once hunted to near extinction. To a landowner with the intention of preserving nature, success can be charted by individual gifts. On New Year's Day I received such a gift. You might say, "It's just a turkey." I say, "It's a treasure — another of nature's precious gems in my own back yard."