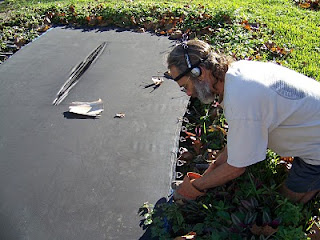 Many people own trampolines, but I wonder how many families are as committed to their trampoline as we are. Our backyard bouncing station came into my husband's possession during his teen years, and it has been with us ever since.

"My sister and I used to take gymnastics lessons," Ralph recalls. "Our favorite part of class was always the trampoline portion."

Trampoline time in gymnastics class was limited, but Ralph's parents overcame that obstacle when they purchased an 8-by-14-foot regulation-size trampoline for their children to use at home. The same metal-frame structure sits in our backyard today. Recently, Ralph replaced the trampoline bed, which has needed replacement only three times in more than 40 years. With its taut new bed, the structure is just as sturdy, reliable and full of bounce as it was in the 1960s.

"Do you realize the bed I just replaced only cost $10 more now that it did 20 years ago?" Ralph said this morning. "That's pretty amazing when you think of how much more expensive most things are today than they were in 1990."

What's just as amazing is how quickly my husband was able to put his finger on the two-decades-old invoice from All American Trampoline and Swing in Ogden, Utah, and that the company is still in business. Not only was Ralph able to produce hard copies of those previous invoices, he also has the company's printed catalog in his files.

"The price of the trampoline bed increased by only 6 percent since 1990, but the shipping cost increased by 50 percent," he said, studying the two invoices.

While my husband marveled over the company's frugality, I found myself fixated on the longevity of our relationship with a piece of exercise equipment. That trampoline has been a part of my husband's life longer than I have. Like the aluminum rowboat my parents gave me when I was 13, my husband's trampoline is one of his oldest and dearest possessions.

It also may be one of his bulkiest possessions. An 8-by-14-foot trampoline is a cumbersome piece of equipment, but that never stopped us from toting it from one residence to another. Since 1970, Ralph and I have moved the trampoline seven times.

Not only did we continually dismantle and reassemble this goliath of exercise equipment, we took the installation process a step beyond what most people do. We dug a deep hole at most of those locations and sank the metal frame into the ground. It takes more work to do it this way, but the extra effort goes a long way toward preventing injury. An in-ground trampoline is much safer to jump on than one perched several feet above ground.

For more than four decades, our backyard bouncing equipment has provided us with entertainment, exercise and unexpected benefits. I always knew it would be a source of fun for the kids, and I wasn't surprised to discover how much our whole family enjoyed the bed's springy surface as a place to rest, read or watch the stars. What I didn't anticipate was discovering how beneficial regular bouncing could be for my health.

Even a very light workout of simple up-and-down jumps for 10 minutes a few times a week improves flexibility, coordination and balance. It also strengthens muscles, provides an excellent cardiovascular workout and does wonders for weight loss. I'm sure my husband had no idea back in 1964 that the gift his parents gave him would one day be part of his 58-year-old wife's exercise routine or aid in his own quest for increased stamina and a stronger heart.

When I think back about all the inanimate objects we've owned over the years, few rival the trampoline's longevity. It has outlasted every car, piece of electronics or appliance we've ever bought. Is it possible to feel committed to a piece of exercise equipment? Let me be the first to jump in to say: Absolutely!