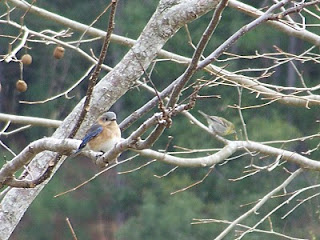 I understand what Henry David Thoreau meant when he said, "The bluebird carries the sky on his back."

I had just walked past the line of mulberry trees into an open field between the woods and the house when a flash of blue — sky blue — caught my eye. 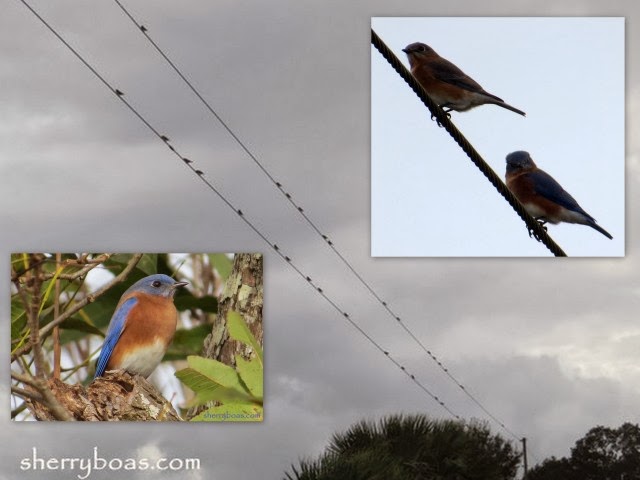 For many years, I've lived in fairly remote, wildlife-friendly settings. Although I've enjoyed watching a wide range of feathered fliers, until now I had never seen a bluebird. Perhaps I had missed the birds, or maybe they were always there and I just hadn't looked hard enough. It could also be that until recently the habitat on our property did not meet a bluebird's requirements. 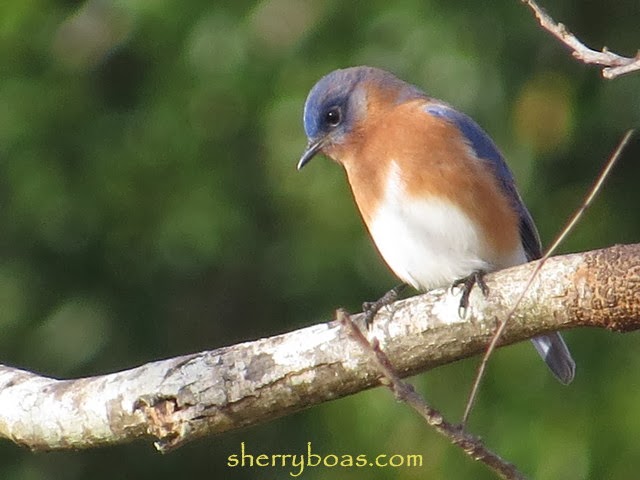 The Eastern bluebird is a member of the Turdidae or thrush family, the same family as wood thrushes and robins. Bluebirds and robins even look somewhat similar. Both have reddish-brown breasts, although a bluebird's belly has white plumage as well. At 7 inches, bluebirds are much smaller and more delicate-looking birds than either robins or wood thrushes. As its name implies, the bluebird has a predominantly sky-blue coloration — a beautiful, brilliant eye-catching color. 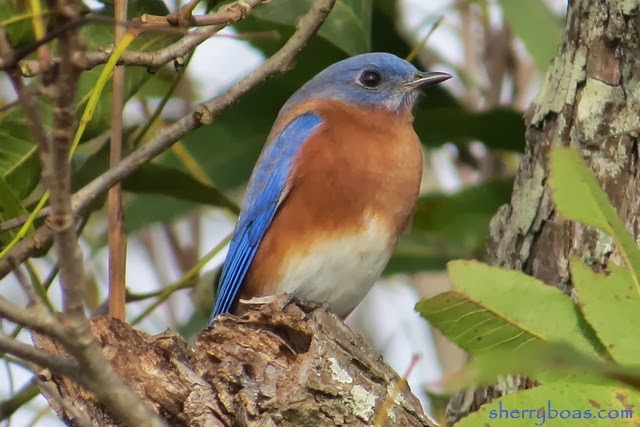 The habitat bluebirds prefer is a combination of fields and woods. Bluebirds like to live on the edge of woods — especially pinewoods — in which there is not much undergrowth. In addition to a small percentage of fruits and berries, these bug-eating beauties consume quantities of grasshoppers, caterpillars, crickets and beetles. Because insects make up almost 70 percent of their diet, they gravitate toward open farmland, fields and fence lines where food sources are plentiful. 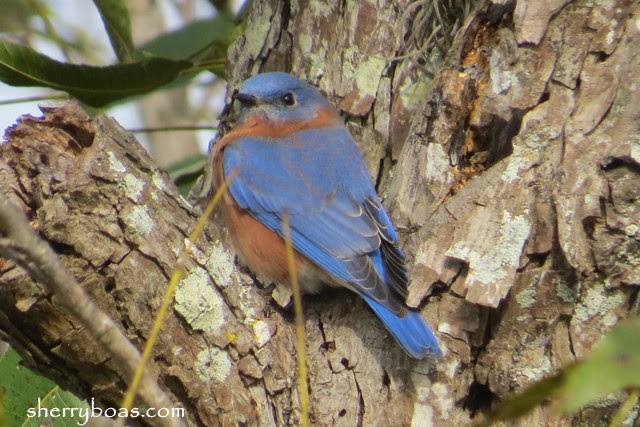 The more I learned about these sweet little songbirds, the more I realized that the land I live on has many of the attributes bluebirds appreciate. We have woods, we have fields, we have many sources of wild berries and we don't use pesticides. The lake provides the shallow water that bluebirds like for bathing, we mow regularly to limit undergrowth and, when trees die, we generally leave them alone.

Bluebirds are cavity-dwelling birds that like to build their pine-needle-lined nests in the cavities of dead trees. Sometimes they take over an abandoned woodpecker nest, and often they perch on a dead tree's bare branches while searching for food. 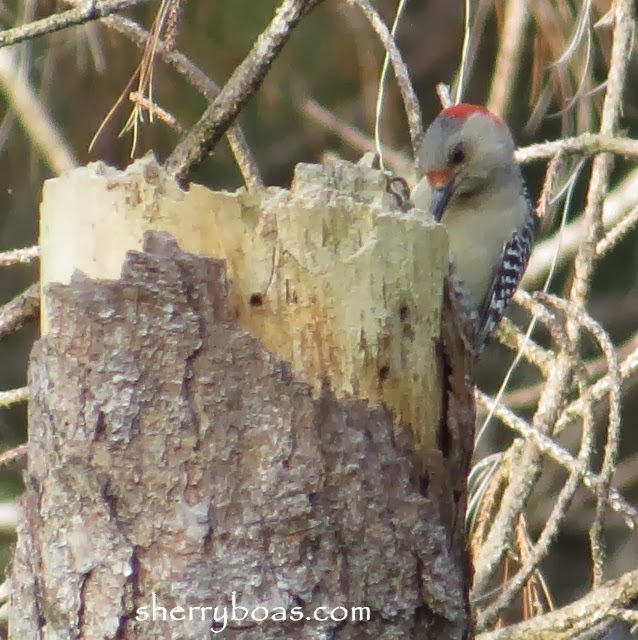 I've always liked leaving dead trees in place. Some people think a tree struck by a lightning, felled in a storm or killed by disease is an eyesore, but to me each dead tree is alive with possibilities. If it is tall enough, ospreys and eagles will perch on snags and uppermost branches, while owls and smaller birds will drill holes in the decaying wood. In North America, 55 bird species — including bluebirds — nest in tree cavities. 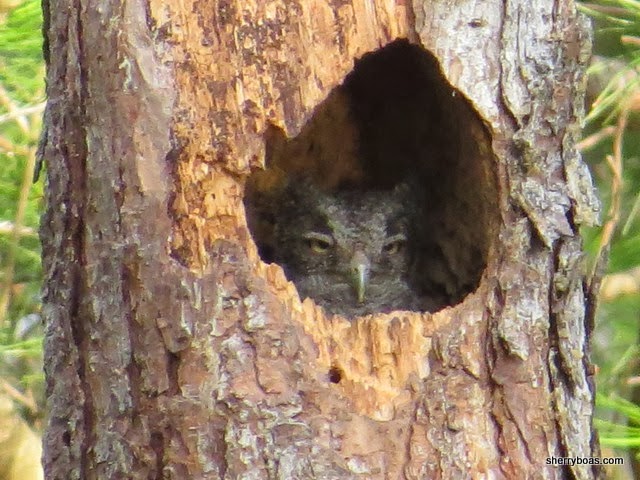 But birds are not the only beneficiaries of a tree's demise. Mammals, amphibians, reptiles and invertebrates all reap benefits when trees stop living. Some find refuge in natural cavities and dens, while others seek security beneath rotting logs. Small mammals get relief from the heat in dead limbs and downed wood, while a tree's decaying matter provides a feast for spiders, beetles, worms and microbes. 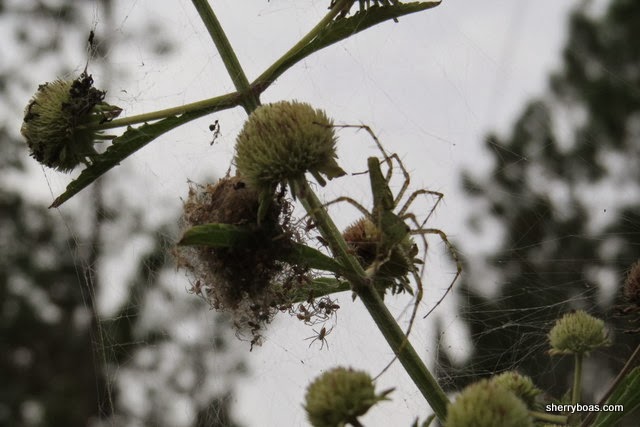 It's those invertebrates that bluebirds are after. The birds I watched were busy flitting about from tree to ground in search of their insect prey. I followed them as they flew about and was rewarded by their cheery song.

Seeing bluebirds was yet another thrilling experience in a year that has so far been full of wildlife encounters. I'd like to think that our mindful management and nurturing of the land have helped secure a wide range of wildlife habitats, and maybe they have. It also may be that time alone is responsible for the abundance of recent animal and bird sightings.

As plants have matured, more wildlife is attracted. Whatever the reason that bluebirds have suddenly begun to appear, I welcome their arrival. Thoreau imagined bluebirds to be transporters of sky, but to my eye, these blue-feathered fliers are signs of the Earth's good health. When the land is in balance, life will flourish and pretty bluebirds will continue to carry the sky on their backs.
Posted by sherry boas at 5:02 AM