Broccoli is the beneficial harvest of March 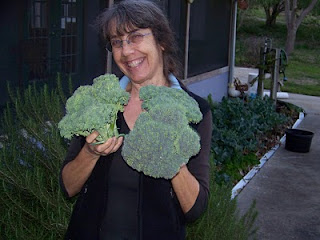 Simply Living
(First appeared in Orlando Sentinel March 29, 2010)
Think of harvest time and autumn comes to mind. But if you live in Florida, and if you grow broccoli, March can also be a bountiful month. In our family, broccoli dominates. We devour green florets with the voracious appetite others reserve for sweet treats, salty foods or chunks of red meat. Seldom does a day go by without one or more servings of broccoli on the menu. Light steaming is our most common method of cooking, but the green tops also find their way into stir-fries, roasted vegetable concoctions, quiches, soufflés and sandwiches. When broccoli is not growing in the garden, we buy it at the store, but fresh-picked vegetables are more flavorful than anything found in the produce aisle. Fresh-picked, however, is not always available. We planted our current harvest from seeds sown in early January. Broccoli is one of many edibles that do best when planted successively. Seeds can be sown every week from mid-August through early March. Follow that schedule and you will have broccoli ready to pick from early October through May. That's eight months of healthful eating. It's a wonderful plan if you can manage to follow it. Unfortunately, we never have. Most years, we get off to a good start. We think about planting in August when the weather is too hot for anything other than thinking. Sometimes, like this year, we actually go a step beyond the thought process and plant seeds in the fertile ground. The problem is, we don't continue. One planting, maybe two, and our momentum is lost. Seeds germinate. Young plants develop. Flower heads form. But instead of putting more seeds into the ground as we know we should, we become sidetracked with other projects. We often don't put in another planting until several months later — as we did this year — when we realize we've fallen behind. A member of the Brassicacae family, broccoli shares its heritage with such "love them or hate them" vegetables as cabbage, cauliflower, Brussels sprouts, kale, collards, kohlrabi and horseradish. When cooked, broccoli emits a strong sulfuric odor, a smell strong enough to discourage many people before the first bite. And that first bite can be disappointing. Too often broccoli is overcooked, mushy and dark green instead of being fork-tender, crisp and brightly colored. A light steaming is all that's needed to provide nutritious eating. Broccoli is an excellent source of vitamin C and minerals such as potassium, calcium, magnesium, iron, zinc and copper. Research has shown that broccoli also contains several important cancer-prevention elements. I'm sure that the plant's potential health benefits influence our family's eating habits. But even if broccoli wasn't a nutrition powerhouse, we'd still be growing and eating it. We eat broccoli because we like the way it tastes, and we have it in our garden because it is such an easy, productive plant to grow. A single mature broccoli plant requires about two square feet of space and takes about 60 days to go from transplant to cooking pot. Although broccoli leaves and stems are also edible, the portion of the plant most commonly consumed is the flower head, which forms — quite beautifully — in the center of the leafy surround. Once the flower head has reached an acceptably large size, it is "beheaded" and eaten. But that's not the end of the plant's life. Small side shoots soon appear, extending the plant's productivity for several more weeks. A single round seed or a young transplant purchased at the garden center provides months of edible goodness. I wonder if we'll ever manage to plant our favorite vegetable at successive intervals. Ever the optimist, I'm hopeful we will, but even if we don't, I won't despair. It's hard to feel disappointed when you can walk out your front door at the end of March and return moments later with an armful of nutrient-rich veggies. Autumn may still be months away, but I have no reason to wait for September. I'm cooking up a batch of fresh broccoli for dinner and celebrating harvest time today.
Posted by sherry boas at 11:45 PM