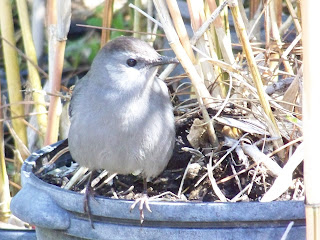 Simply Living
(First appeared in Orlando Sentinel April 5, 2010)
A small, gray catbird has befriended me.
When I walk out to the nursery, a 2-ounce bit of feather and fluff usually hops over to say hello. The bird displays an eager curiosity. Rather than be intimidated, scared or threatened by my presence, the black-capped bird seems keen for the company. He follows me about like a well-trained puppy acting as if he's happy to have a visitor.
Maybe he's curious about what this large, featherless creature (me) might be doing in his territory. Or it could be that he's lonely and looking for a friend.
Although I've yet to find his nest, I suspect that he lives in one of our many mature plantings of clumping bamboos. Catbirds, which are related to mockingbirds and thrashers, like to build their open-cup nests close to the ground on horizontal branches deep in the center of dense shrubs and thickets.
Certain bamboos grow very thick, and I can easily imagine how a small bird seeking protective shelter would gravitate toward a mature clump of Buddha Belly, Alphonse Karr or Multiplex bamboo. It can't hurt that several food sources, such as our white mulberry and loquat trees, are just steps away from potential nest sites.
In addition to dining on all sorts of fruit and berries, catbirds are fond of eating bugs. Beetles, grasshoppers, midges, caterpillars, spiders and moths make up much of their diet. They even eat ants, a highly prized attribute in this part of the country, where ant populations are out of control.
Being befriended by a feathery flier has improved my bird-identification skills. Although I used to confuse catbirds with mockingbirds, I now realize that the two are quite different in appearance and behavior. Mockingbirds are larger than catbirds and have distinctive white streaks on their wings and tails. They also like to fly from one treetop branch to another, while the smaller, gray-colored catbirds keep to the ground. Catbirds prefer flitting from one low perch to another. Although not exactly ground birds, they demonstrate a decided resistance to broad, showy flights.
The catbird in the nursery is a sweet little bird. The fact that it acts so forwardly toward me contradicts the species' normally shy nature. Why this bird has chosen to be so sociable is a mystery. I have no way of knowing if he is merely defending his territory or is actually as interested in me as I am in him.
Like most people, I've accumulated a wide range of friends over the years. I have elementary-school classmates I still stay in touch with as well as new people I've grown close to even though I've known them only a short while. Several pets have been as dear to me as human companions, and I've even become close to certain people with whom I communicate online but have never met.
My friendship with the catbird, however, is a brand-new experience. He (or she — I really can't tell if the bird is male or female) has initiated the relationship, making me the unexpected but delighted recipient.
It's a pleasure to be on the receiving end of any friendship and good will, and if that friendship happens to be with a songbird, well, all the better. It's not every day that people are "adopted" by wildlife. When it happens at all, it usually happens the other way around. Thanks to the little gray catbird, my life is fuller; I've broadened my knowledge and expanded my perspective.
Every wildlife encounter is a chance to glimpse, ever so briefly, into the lifestyle and habits of another creature. Thanks to the black-eyed beauty that lives in our bamboo nursery, I head out to see customers with a renewed enthusiasm and lightness to my step. On one level, I'm going to the nursery to sell bamboo, but on an entirely different level, I'm heading out to see a friend.
Posted by sherry boas at 5:06 AM