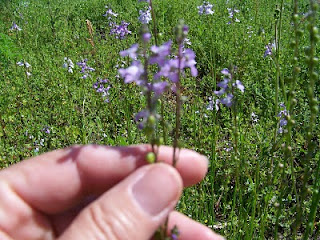 Simply Living
(First appeared in Orlando Sentinel April 11, 2010)
If you've been out driving lately, you may have noticed a flush of blue wildflowers on the roadsides. The flowers are 1 to 2 feet tall with lavender-blue blooms atop thin, leggy stems.
They are small flowers, easy to overlook if grown alone but completely captivating when clustered together. The flower's botanical name is Linaria Canadensis, but its common name is toadflax. I've only recently learned its name and I don't much like it. The image that toadflax invokes is not nearly as attractive as this wildflower deserves. Fairy bonnet or shy violet would be a more appropriate moniker suggestive of the plant's delicate and unassuming appearance.
Although Linaria canadensis is native to Florida, it grows throughout the United States and Canada. A springtime bloomer, this sun-loving, slender-stemmed flower is not fussy about soil conditions or irrigation. It does just as well in dry, sandy locations as in irrigated garden soil. Self-sown by seed and spreading through an underground network of roots, thousands of individual toadflax are scattered about our property, appearing in equal numbers around water spigots as they do in dry open fields.
When my children were little, they used to gather quantities of the delicate flowers and present them to me for bouquets. The blooms of Linaria canadensis are just right for little hands. The slender stems either break off or pull out of the ground easily and the flower heads are tiny – each one barely bigger than a half inch. From a toddler's perspective, that's an ideal size and if an adult takes the time to look closely at this miniscule bloom, they'll understand why children find them so attractive.
I think Linaria canadensis looks a little like snapdragons but Frederic William Stack, author of Wild Flowers Every Child Should Know, says the flowers remind him of lobelias.
"The pretty little tubular flower is two lipped, with a slender, sharply-pointed, curving spur. The upper lip has two small, rounded and erect lobes. The lower lip has three rounded, spreading lobes, and at the throat there is a prominent, white, two-ridged swelling that hides the stamens and pistil. Several flowers are set on tiny stems in a loose terminal spike."
I like to learn about the plants in my neighborhood, especially ones as prolific as Linaria canadensis. For more than 19 springs, I've enjoyed this wildflower's colorful displays. I've picked the flowers, put them in vases and intentionally left large patches of the bloom standing when mowing the lawn, and I've done all that without knowing the plant's name. That's not unusual. If I walk outside right now, there are probably a dozen other wildflowers growing nearby that I'd be unable to label.
Although I may not know their botanical names, I do know those flowers by their traits. Some are prickly. Some have burrs. Some pull out easily when I weed the garden while others require a substantial yank to detach the roots. The blooms on a few are impressive, on others, not so much. I know which flowers attract butterflies, bees and caterpillars and which have a fragrance that's pleasant to inhale. As interesting and informative as it is to learn the botanical and common names for everyday plants, a name is only one part of a plant's personality.
On the topic of names, I think Linaria canadensis is too large a title for a little flower and the less than attractive moniker toadflax seems all together inappropriate for this lovely member of the figwort family. To me, Linaria canadensis will always be "the little blue flower that appears in spring." That name is admittedly longer than necessary but at least it accurately describes this overlooked beauty that enriches our landscape each year.
Posted by sherry boas at 5:20 AM