I was surprised when I first saw the gopher tortoise on the concrete path by our porch. I figured it must have wandered there by mistake. 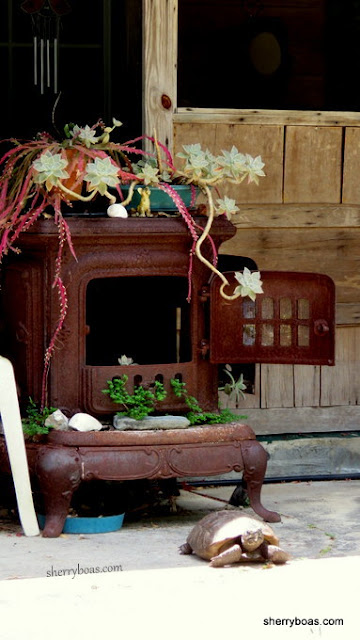 Then I saw it again the next day.

This time, the tortoise was in the same spot but it faced a different direction. The day before its head pointed away from our house. On the second day, it pointed toward it.

Something was going on but I wasn’t sure what.

I squatted down to watch the unexpected critter and took a few pictures but soon left because not much was happening. The hard-shelled reptile didn’t move. All it did was open and close its eyes — two dark knowing orbs sunk deep within its grayish-brown scale-covered head.

As surprising as it was to see a gopher tortoise so close to our house, encountering one in our area is not unusual. Tortoise holes pepper our property. Some are abandoned but others show signs of use with newly scuffed sand in front of the entry hole.

The animal’s scientific name, Gopherus polyphemus, means “burrower” (Gopherus) and “lives in cave” (polyphemus). It’s an appropriate moniker since digging tunnels and living in them are defining features of this land turtle whose relatives date back 250 million years. After selecting a semi-sunny location in an open area with sandy soil, a gopher tortoise uses strong claws on its shovel-like front feet to create a deep and expansive burrow twice as wide as its body.

It takes about two to three days of steady work for a tortoise to dig a downward-slanting 15-foot long by 5-foot deep burrow, but not all tortoise holes are the same size. The length and depth of the reptile’s subterranean home depends on location. In coastal areas where the water table is close to the surface, a burrow may only be 6 feet deep and 3 feet long while in high, dry sandhill areas a tortoise may have to excavate a tunnel more than 50 feet long and more than 20 feet deep to reach a point just above the water table.

The gopher tortoise I recently encountered must not have read the gopher-tortoise handbook. Either that or he skipped the chapter on proper burrow construction. For the last six days my new friend lived above ground, not under it. He “burrowed” into the accumulated leaf litter in a corner of our paved patio, wedging himself snuggly between the porch’s stucco wall and the underside of low tables and patio chairs. When I open the porch door, I can see him.

Having a wild animal take up residence in an easily observable location is an incredible opportunity. I have learned much over the last week by simply keeping an eye on our almost-a-houseguest. One of my main discoveries is how inactive he is. My new neighbor is not what you’d call a go-getter. He sleeps until mid-afternoon. Around 3 p.m., he comes out of his “burrow,” chooses a direction and strolls out to eat. Meals are a slow but steady graze. A bite of this leaf. A taste of that. Chew slowly. Yawn often. Move on to the next snack.

By 5 p.m., mealtime is over and he’s ready to head “home” — home being his lazy-turtle abode beneath our patio furniture. Before the sky has darkened, he is already hunkered down for slumber in the shelter of his repurposed home.

I spent six illuminating days keeping an eye on the gopher tortoise but the fun ended on day six when my reptilian rambler failed to return “home” following his afternoon graze.

I’ve read that during mating season, which is now, male tortoises often roam large distances in search of females. I like to think that’s what he’s doing. Perhaps his stay at Chez Sherry helped him rest up to be refreshed and ready for the journey ahead.

Of course, he could as easily have been a mixed up old land turtle who didn’t know what he was doing or care where he slept. Either way, watching him was a thrill I could “gopher” again and again.
Posted by sherry boas at 5:15 AM