Gainesville must not have many mosquitos.

How could they when every day at dusk 400,000 hungry bats fly out of two gigantic bat houses on the University of Florida campus to feast on the pesky insects? The custom-built structures are the world’s largest occupied bat houses containing even more insect-eating mammals than the famous Carlsbad Caverns in New Mexico. 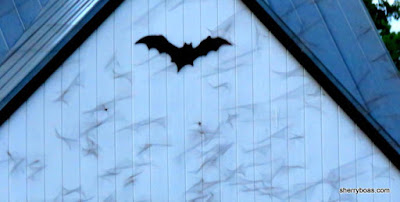 I had wanted to witness this amazing phenomenon ever since my youngest son entered graduate school in the college town. Unfortunately, during the three years he was there, my timing was always off. Seeing the winged mammals take flight required driving back to Groveland in the dark, and while nighttime driving never bothered me when I was younger, my 64-year-old self doesn’t like it one bit.

A few weeks ago, however, I finally made it. By then, Toby had earned his degree and moved out of the townhouse where he had been living. Since he was no longer in the area, we decided to place the property on the market, and my husband Ralph and I went up to ready it for sale. Since we realized it would take more than a few hours to get everything done, we decided to go up for a day and stay overnight.

“While we’re there, we can finally go see the bats,” Ralph said.

Everything went as planned. We cleaned. We took care of minor repairs. We worked hard but felt good about our accomplishments. When the afternoon waned, we got in the car and drove the short distance over to the campus.

The UF bat house and bat barn — two structures with the capacity to house 750,000 bats — are located on the north side of Museum Road across from Lake Alice. The two current bat buildings were constructed in 2009 and 2010 respectively after one built in 1991 collapsed under the weight of the bats and their debris.

The current wood-gable and gambrel-roofed structures are raised 20 feet off the ground on wooden poles. During daylight hours, three different species of insect-eating bats rest by hanging upside down from crevices created by partitions spaced between 3/4 to 11/4 inches apart. The majority of bats living in the two buildings are Brazilian free-tailed bats, but some southeastern bats and evening bats have also taken up residence.

Although they rest by day, the bats make a dramatic appearance about 15 to 20 minutes after sunset. Ralph and I had arrived early, but by the time the sun set, the parking lot was filled with cars, and dozens of other curious folks had gathered to watch the impending show.

And what a show it was! Just as the sky began to darken, thousands of bats swooped out of the houses, flying in what seemed like a synchronized pattern of down, up and around the skyline. In all my years of observing wildlife doing amazing things, I have never seen anything as surprising as the nightly exodus of 400,000 fast-fluttering mammals pouring out of the bat houses and flying through the sky with determined ferocity.

“This is incredible!” I murmured as much to myself as to my equally awed husband standing by my side.

In the coursse of just a single hour, each individual bat can catch and consume up to 1,000 mosquitoes. Multiply that by 400,000 and the result is the potential reduction of 400 million insects in just one hour alone. What’s even more astounding is that these winged eating machines don’t limit themselves to just an hour of feasting on the fly but continue to scour the night sky for hours. That’s enough to make one wish more parts of the country were so naturally well-protected from pesky insect scourges.

Our visit to the UF bat houses was even better than I imagined it would be. Not only were we able to watch the entire spectacle, but our early arrival at the site coincided with the appearance of a beautiful double rainbow in the sky. 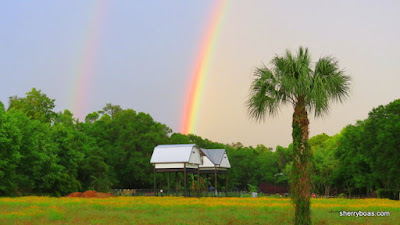 Call it an omen or perhaps just a reward for waiting three years to make it happen. However you look at it, seeing the bats leave their slumber spots to fly out into the night was well worth the wait.
Posted by sherry boas at 6:38 AM