During the last year, Ralph and I have been going back and forth between Lake County and the Volusia town of New Smyrna Beach.

For part of each month I’m a country gal, enjoying the fields, woods, wetlands and lakes that blend together on our Groveland property with groves of bamboo, fruit trees, vegetable gardens and flowers.

For the rest of the month, I’m a beach bum, riding my bike along the surf, exploring brackish water lagoons, discovering different plants and learning about all kinds of previously unfamiliar wildlife.

I go for the occasional dip in the ocean but not nearly as often as my saltwater-loving husband for whom beach time is a throwback to his formative years on Cape Cod.

Initially, I found the transition from one place to another to be difficult. I’m a put-down-roots kind of person and although it took several months to set things up so both places feel like home, we eventually achieved that sweet spot of familiarity settling in with only slight modifications depending on where we were. In Groveland, I may go for a morning row whereas at the beach, I might bike down to ocean to watch the sunrise.

Watching the sunrise is a big attraction to me and while catching a glimpse of Ol’ Sol peeking over the horizon requires more precise timing than a pre-dawn paddle on the lake, I’ve found it to be well worth the effort.

I wish I could say I’ve watched the sun rise over the waves often but the reality is I’ve only managed to motivate myself to get to the beach early enough to see the sunrise a half-dozen times this past year. Although not nearly often enough, each time has brought me a great deal of pleasure.

The last time we were in Volusia County was the first time Ralph joined me for a pre-dawn jaunt. Usually, he stays behind in bed, content to catch up on his sleep while I pedal along the ocean until I find a place on the hard sand where I can set up my camera and sit back to watch the show.

This time, he timidly asked from the bed, “Okay if I come along?”

I looked at his sleepy face and thought about all the things my dear husband normally does before he goes anywhere in the morning.

“Sure,” I replied with a hint of hesitancy. “But you’ll need to get going. The sun rises in less than 15 minutes.”

That sounded fine to me. Although I doubted he’d make it, I gathered up my gear, kissed Ralph goodbye and headed out the door. The beach is just a couple blocks from our house so it didn’t take long to arrive. The tide was low – perfect for beach biking – and the shore was exactly how I like it, occupied by many birds and few people.

I was focused on a willet skirting the waves when Ralph startled me with a cheerful ‘Hello!’ as he pulled up alongside. Pleasantly surprised, I looked at him and smiled.

We rode a little farther down the beach before stopping to set up the camera and wait for the sunrise. When it finally appeared – at first a mere sliver of orange light that quickly rose in brilliance as it arched above the horizon – I looked at my husband and saw the wonder of the moment reflected in his face.

“I understand now why you like getting up early and coming here,” he said.

His comment required no response. The sky said it all.

We stayed on the beach for about a half-hour, long enough for the orange orb to set the day aglow in dazzling and quick-changing displays of color and light amid shifting clouds.

We were both quiet as we biked back to our beach house until Ralph asked, “Don’t we see the sunrise at home?” referring to our west-facing Groveland house.

“We do,” I explained since I’m usually out rowing during that time of day, “but we see it after the sun has already risen. Trees prevent us from seeing the sun peek over the horizon like we can at the beach.”

A short video of our sunrise at the beach

The sunrise is an often-overlooked marvel of life. It happens so often we take it for granted. But when we do look – when we take the time (make the time) to notice that golden glow rising about the horizon - a warm and brilliant glow rises within us as well.

I went to the beach, saw the sunrise and shared it with the most important person in my life. A new day began. It was good. 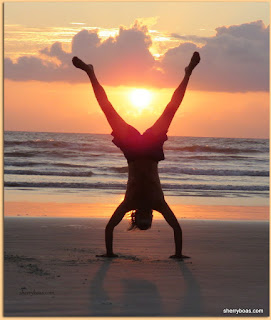