Aha! I figured out where they sleep!

I’m talking about pigs — specifically, the wild pigs that live on our property.


For more than a year, feral hogs have been mucking up the shore of our lake. Black, brown and rust-colored swine have made quite an impression on both me and our acreage.

Only a few small swaths of shoreline remain untouched by the critters’ dirt-disturbing snouts. I’ve watched hogs unearth soil in search of edibles. I’ve heard them grunt while wallowing in mud puddles and squeal while devouring a meal. I’ve listened to annoyed boars stomp the ground with cloven feet when they’ve wanted me and my camera to go away. One time, I even spied a pig swimming from one side of the lake to the other — quite the surprise.

However, until lately, I had never seen wild hogs sleep or watched a sow nurse babies.

That changed on a recent morning when I made myself wake early, get out of bed and climb into my rowboat for a pre-dawn paddle. My motivation for such early-hour action was a long-held suspicion about where the feral pack spends their nights.

Near the south end of our lake, clumps of cogon grass have encroached on a narrow but long stretch of land wedged between the water on one side and a dense grove of running bamboo on the other. The bamboo provides shade and protection while the cogon grass, a non-native invasive plant that chokes out other species and spreads rapidly, provides a soft place to sleep once the bodies of several 150 to 200-pound animals lie down and crush its long, sharp blades.

Compacted cogon grass was my first indication that the hogs were spending at least some time in that area. Once flattened, the tall, grassy mounds resemble large nest-like structures that I could easily envision enveloping the bodies of bristle-haired mammals seeking a protected place to rest. It’s also a safe spot. The entire area is practically impenetrable by people unless they enter wearing thigh-high boots armed with heavy-duty loppers or machetes. If I were a pig in search of a safe and secluded place to sleep and raise young, I’d go there too.

My instincts were spot on.

On the morning of my row, I drifted in slowly toward the shoreline in question. At first, I heard rustling sounds but didn’t see anything other than squashed mounds of cogon grass. However, the longer I stayed quietly in place, the more I began to notice movement. The movement wasn’t of the animals themselves, but the snapping, waving and crunching of bamboo shoots and cogon grass blades. I didn’t quite understand what was going on until a pig — quite a big pig — poked its head from beneath a blanket of amber-colored blades. A discovery: Cogon grass not only provides padding for pigs to sleep on but also provides a blanket-like cover when they tunnel beneath it.

I remained a couple feet from the shoreline for a long time. I was there long enough to watch a sow move from her hidden slumber spot to the smashed grasses. Immediately after, her greedy litter followed, tumbling up and over each other in a frantic search for a place at the feeding station, a.k.a. their mama’s teats. 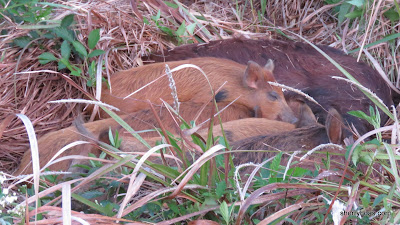 Amazingly, I watched all this while standing up in my little aluminum rowboat less than 10 feet away from a family of feral hogs, and they didn’t notice me. To say I was awed would be an understatement.

Now that I know where they sleep and have observed a mother pig nurse her young, the question of what to do about the situation has become as murky as the lake’s shoreline.

In Florida, feral swine can produce two litters a year of 1 to 13 young a time. I have friends who have offered to hunt the wild pigs, but do I want to be responsible for the demise of a sow and her piglets? Should I send friends to that spot for an easy shot at a sounder of hogs or do I allow my maternal nature to take over and save the babies? There are already more than a half-million wild swine in the Sunshine State. Would it be irresponsible to add to that number by ignoring an opportunity to reduce their population when I can?

Having wild hogs on our property has certainly been challenging. It has also been thought provoking and exciting. It has provided me with opportunities to observe large mammal wildlife behaviors that I had never before seen. The one thing it hasn’t been is boring — or, should I say, boaring? In complex situations of decision-making, it’s important to maintain one’s sense of humor.

Watch a video of the sounder of wild hogs