Oh, what a beautiful morning!

It’s 11:13 in the morning and I’m still in the kitchen sitting at the table looking out the window. Although there is no shortage of things I could be doing - many things I probably should be doing - I’m ignoring them all. To do them, I’d have to leave my kitchen window post and so much is going on outside in the yard. If I left, I might miss something important and I don’t want to do that.

Right now, a bluejay is greedily stuffing itself with sunflower seeds at one feeder while a dainty Carolina chickadee just flew onto a different station only to fly away moments later with a single seed in its beak. Two birds with such different styles of eating. 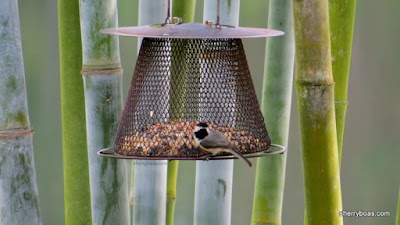 From the sycamore tree, I hear the plaintive tones of a tufted titmouse announcing its intention to land on the feeding station as soon as it’s unoccupied. The little gray titmouse is a patient bird, preferring to wait until other birds have taken what they want before it flies over for quickly plucked seed.

Suddenly, overhead – gosh, look at them come! – a flock of cedar waxwings has just arrived to scope out the ripening mulberries. Darn those masked bandits of the sky! Waxwings, which arrive in the hundreds, have the uncanny ability to know just when fruit is ripe and to land en masse when it is. Within hours, a flock of these berry-devouring birds can decimate an entire crop of fruit.

As if that was not enough avian activity to satisfy a devoted birdwatcher’s dreams, a palm warbler just landed on the sow thistle plant to nibble on insects while a red-bellied woodpecker positioned itself upside down on the suet cage to break off a large chunk of seed-infused fat. 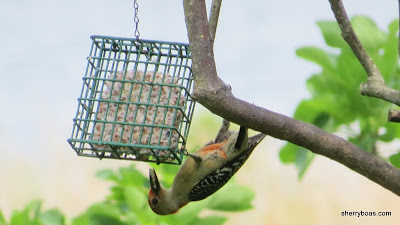 Can it get any better than that? Yes, it can!

A pair of bluebirds is chattering away as they check out the nesting box closest to our house while off in the distance a lesser blue heron just hopped off another nesting box to catch some unfortunate snake or frog in the weeds. 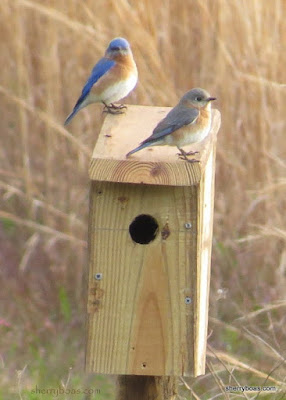 I hear crows cawing overhead and a nearby flash of red that means a male cardinal is about to make his entrance on the scene. 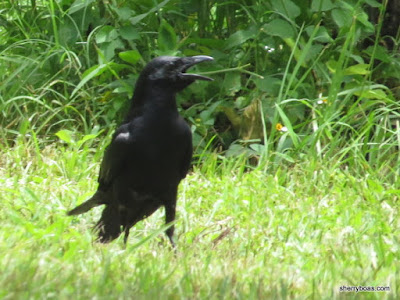 But that’s not all!

During the last week, a family of sandhill cranes has been wandering around our front yard. As I sit now in the kitchen sipping my morning cup of PG Tips, mama crane, papa crane and their two fluffy yellow baby cranes – they look less than 10 days old - are poking the ground in search of insects, grubs and fallen seeds from the birdfeeders. The adorableness of the scene is off the charts.

Add to this bucolic picture the fluttering wings of yellow sulphur and gulf fritillary butterflies around the tropical salvias, the buzzing of bees on the African basil and the statuesque poses of green and brown anoles sunning themselves on plant leaves and any chance of my leaving the room dissolves in a puddle of pure delight.

Forget the chores and errands I intended to do this morning. The wash can wait a little longer to go into the drier. I can go to town later in the day and still check off all the chores on my to-do list.

When my kids were little, nature beckoned and I tried to listen, but even when I did, moments of nature-infused pleasure were fleeting at best. My family’s needs took priority, which is as it should be when one’s children are young. But those days are over. My kids are grown up with kids of their own. I’m older now and time is different. Instead of being chained to a clock or to someone else’s schedule, I exist in more permeable space flowing in and out of whatever activity catches my interest.

This morning I was captivated by the world outside my window. Getting older has its drawbacks but being free to enjoy life’s little pleasures whenever and wherever they appear isn’t one of them. It’s almost noon and I’m still in the kitchen sipping tea, looking out the window. I love how this day is turning out!
Posted by sherry boas at 2:31 AM