I call it my 'Let it Be' garden

On the other side of the driveway across from the kitchen window, a four-foot by four-foot patch of ground bursts with life. All day long, bees, butterflies and beneficial wasps zip from one blossom to another in search of nectar. As the insects search for sweetness in the depths of floral throats, they brush sticky pollen, which adheres to their bodies. In the process of feeding, they become inadvertent pollinators. 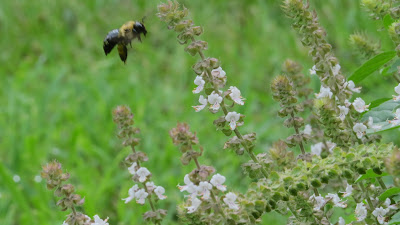 My 'Let it Be' garden has little order. Whenever an appropriate plant comes along, I grab a trowel, find a space and dig it in. While little thought has gone into the garden arrangement, all plants share one common trait — they must not be fussy. To have a successful 'Let it Be' garden, each plant must thrive on neglect. The only water it gets is from the rain. I rarely weed. The soil was amended with compost and manure before anything was planted but since then, the only addition has been an occasional layer of grass clipping mulch.

Yet, despite such neglect — or maybe because of it — this garden has thrived. The small rooted cutting of African blue basil that my daughter Amber gave me has grown into a sprawling mass of dark blue flower spikes covered with a continuous array of pale pink blossoms. This Florida-friendly plant is a true pollinator magnet. Not only does African blue basil attract a constant stream of nectar-seeking insects, it is also an edible herb that can be used to make pesto or any culinary preparation that calls for basil. 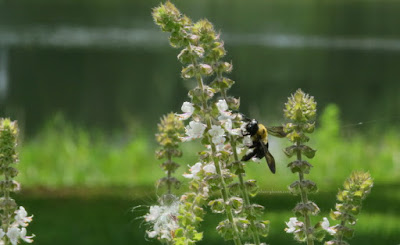 Another plant in my garden is easy-to-grow tropical milkweed, Asclepias curassavica. This prolific bloomer is a nectar source for all butterflies, including monarchs. 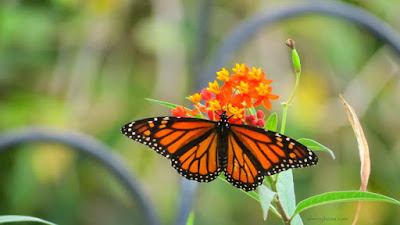 But in scientific communities, controversy hovers over whether this non-native plant is beneficial to monarch populations. Monarchs lay their eggs on milkweed plants and when the eggs hatch, caterpillars eat the leaves.

Bees and beneficial wasps like it too. It is a fast-growing, no-fuss plant to have in a butterfly or wildlife garden.

Pink rain lilies, some dark colored coleuses and a low-growing plant called Asystasia gangetica, are among the basil and milkweed. Asystasia, commonly known as Ganges primrose, Chinese violet and creeping foxglove, was new to me so I had no idea how hardy it was or how well it could handle a very limited amount of human attention. It turns out Asystasia is quite the trooper. It's holding its own beneath taller plants like the tropical milkweed and seems to attract a variety of moths and small skippers.

Other cultivars in my 'Let it Be' garden include a volunteer cluster vine, which has climbed up and over a shepherd's pole from which a birdfeeder hangs, and a few millet plants that sprouted from seeds that fell out of the feeder.

Yesterday I noticed one new addition to the garden. An armadillo has excavated a deep hole beneath the dense cover of the African blue basil plant. My 'Let it Be' garden proves that if you choose the right plants, you can have a productive, wildlife-attracting space without having to do much work. The secret is not really a secret at all. Simply, let it be.
Posted by sherry boas at 4:59 AM