At the north end of our lake a tangle of wild fox grape vines winds up and over a mixed stand of wax myrtles, willows and winged sumac plants. When I’m out rowing, I slow down quietly to pass the north shoreline in the hope of spotting one of the small yellow birds that flit in and out of the leafy wet thicket.

The birds are common yellowthroats, Geothlypis trichas, a type of wood warbler that lives in moist habitats such as marshes and wetlands. 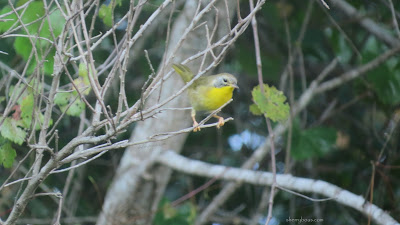 Common yellowthroats are active little warblers. If I’m lucky, I catch a glimpse of their bright yellow-feathered throats or a male’s bold, black eye-band before it flies off to another foliage-covered perch in the low branches of the tangled vegetation.

But the other day was different.

Instead of going slowly by the thicket, I decided to stop rowing. I put my oars down to rest in the still water, positioned myself comfortably on the well-padded aluminum boat seat and quietly waited for something to happen. I knew warblers were there because I heard their calls and noticed movement in the brush.

Would the birds continue to fear my presence and stay hidden, or would they decide eventually that I wasn’t a threat and go about their normal behaviors despite my presence? It took a while, but eventually, they deemed me safe.

One bird — an immature male — decided I passed the ‘friend or foe’ test. Since I apparently presented no imminent threat, he ignored me and went about the more important business of catching small insects in and among the wetland plants.

Watch this short (3:09) video I took of the busy little yellowthroat

The diet of this quarter-ounce omnivore consists of insects and spiders. Any caterpillar, wasp, dragonfly, grasshopper, bee, ant, termite, fly, beetle or small critter that creeps, crawls or flies into a common yellowthroat’s sheltered habitat is a potential meal. Rather than hunt prey in the open, this five-inch long warbler likes to ‘dine in,’ and recent observations show there’s no shortage of food in the tangled weave of shoreline plants. The little bird I watched actively pursued one insect after another.

I’ve rarely experienced as much grateful delight at being the recipient of such overt disregard. Thanks to the little bird’s disinterest in me, I was able to take a prolonged peek into the world of common yellowthroats. As I sat in my boat enjoying the view, all was good. Pesky mosquitoes paid me no heed. The temperature was neither too hot nor too cool. There was no reason to rush. I wasn’t in a hurry. And best of all, for a brief moment in time, I straddled two worlds — one avian, one human.

As much as I love watching and learning about wildlife, I occasionally fret because so many of my nature encounters occur only by happenstance. I just happen to be in the right place at the right moment to catch footage of a coyote chasing a rabbit, a bobcat sitting quietly looking out at the lake or a hummingbird sipping nectar from one firespike flower after another.

But do I have it in me to spend countless hours watching and waiting — especially waiting — for something to happen? Probably not, but I envy those who do and admire their fortitude.

Waiting is hard. I’m an impatient person seeking patience-required results. However, the other day in a small but special way, my short bout of patience was warmly rewarded. A common yellowthroat warbler let me into his world. What a tweet!
Posted by sherry boas at 4:51 AM