Butterflies, blooms and a wonderful surprise!

I haven't been out in my rowboat for most all of May but this morning the lake was flat calm - the way I like it - and for a change, there were no demands on my time.  I was free to do whatever I wanted. So, I went for a row!

It was a wonderful row.  Many flowers that were barely buds when I last was on the water were now fully opened.  I stopped alongside a buttonwood bush to take pictures of all the butterflies it attracted.

Nearby, a gulf fritillary was doing the same thing, sipping nectar from one sticky flower to another.

In addition to the buttonwood bushes, I also saw the newly emerged flowerheads of redroot (Lachnanthes caroliniana), another wetland plant that grows prolifically in the shoreline. 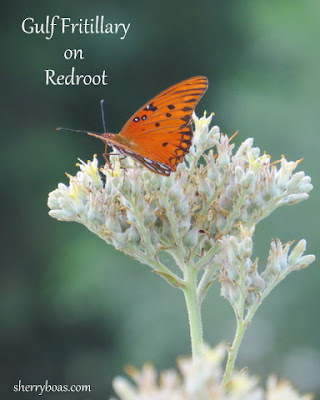 A pink flower with four petals was also blooming.  I don't know this flower's name but it is common along our wetland areas, adding a lovely splash of brightness to the otherwise muted landscape.

In addition to the white redroot blooms, the white buttonwood balls and the four-petal pink flowers, there was lots of yellow.  The yellow-eyed grasses that had only begun to open in early May, were now fully flowering as were the yellow peelbark St. John's wort blooms, Hypericum fasciculatum.

St. John's wort flowers are small but plentiful, covering shrubs that grow right out of the shallow water.

The yellow-eyed-grass (Xyris species) also has subtle blooms but there are so many of them growing along the water's edge that they make the whole shoreline look light up with brightness.

As much fun as it was to see all the new flowering plants since I last rowed and to watch the butterflies flutter around the blooms, the best part of my row was discovering a mother mottled duck with her five adorable babies! 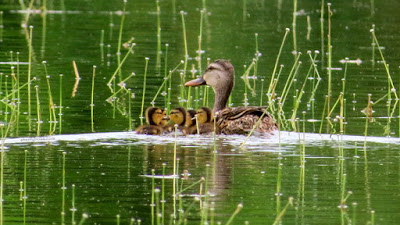 In all the years we've lived here - over two decades - this is the first time I've seen ducklings on the lake.