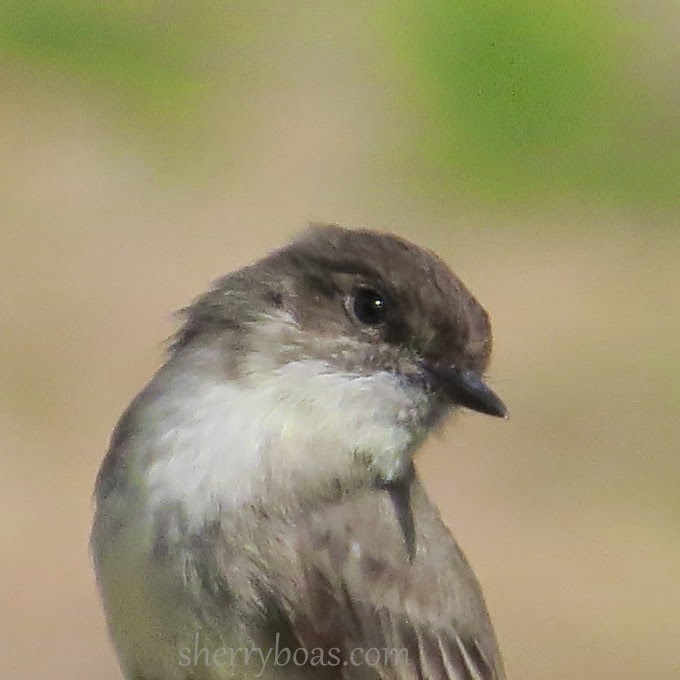 As I sat at the kitchen table getting ready to eat breakfast, an Eastern phoebe sat on its favorite perch considering a meal of its own. 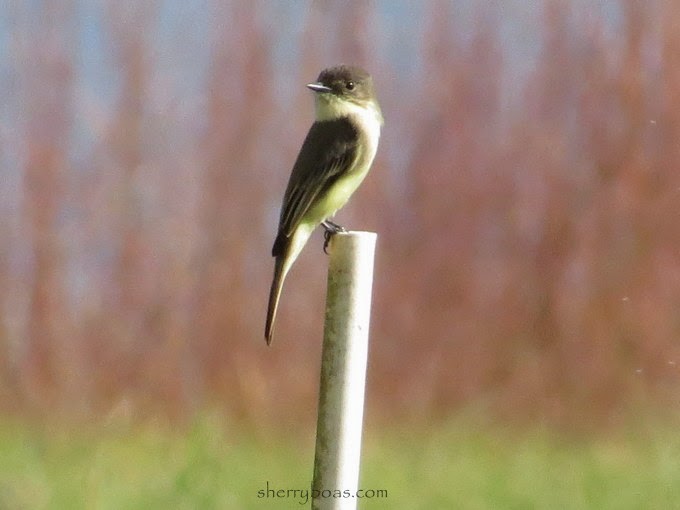 Just as I was about to take my first sip of tea, the little gray and buff-colored bird left its post and fluttered over the ground. Then — as fast as it flew away — the feathered hunter returned to its perch with a green grasshopper in its beak. 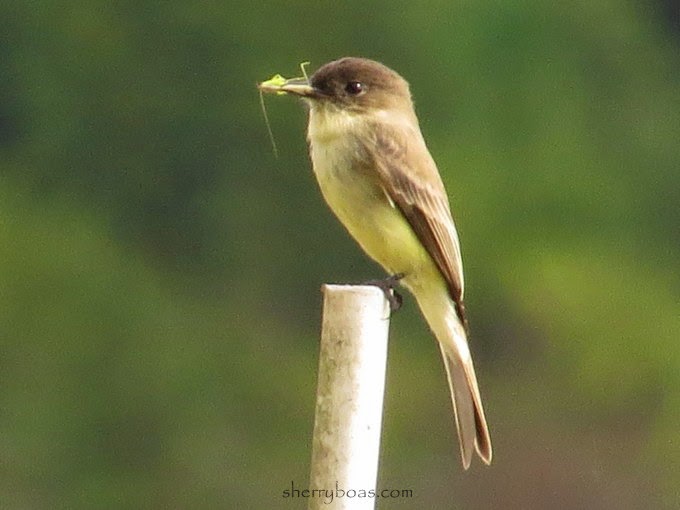 Eastern phoebes are bug-catching pros. In addition to eating grasshoppers, this member of the Tyrannidae (flycatcher) family of birds consumes beetles, flies, crickets, dragonflies, caterpillars, spiders, moths, millipedes, wasps, ants and ticks as well as the occasional fruit and berry. 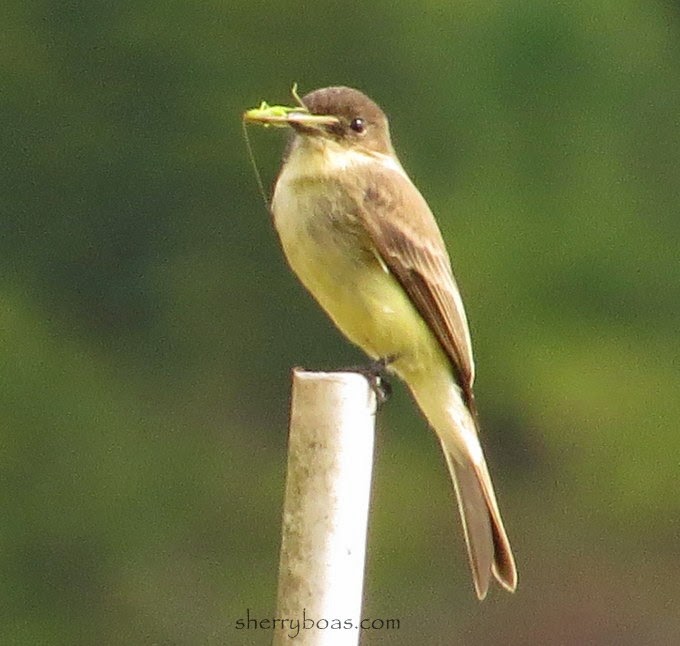 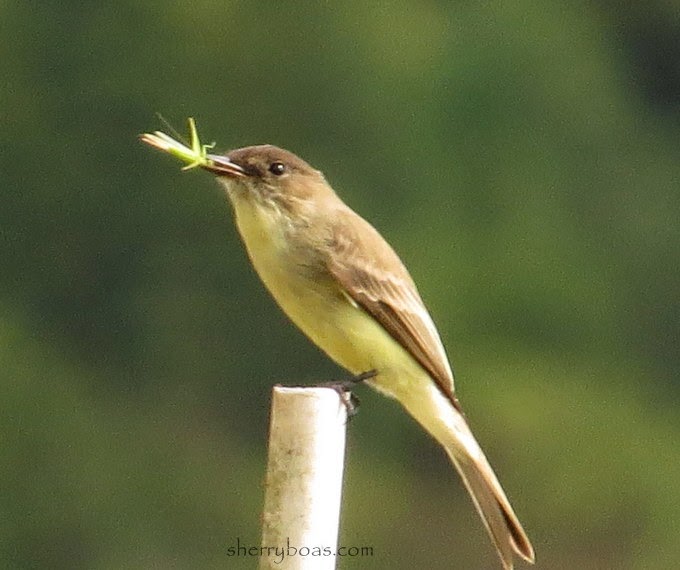 This medium-sized flycatcher is approximately six inches long with a 10-inch wingspan. At half an ounce, the Eastern phoebe weighs about as much as three nickels. Compared to birds with elaborate or colorful plumage, the little phoebe is rather dull. Its upper body is grayish-brown. It has a white throat and buff-colored under parts. Even its head, which has a blackish crown, lacks a fancy tuft or brilliant feathers.

With such an average size and ordinary markings, the Eastern phoebe could easily go unnoticed — but it doesn’t.

Instead of blending into its surroundings, a phoebe stands out. Literally, it tends to stand out in the open. Whether perched on a treetop or fence post, this insect-catching maven likes to position itself in semi-open spaces where it has a clear view of potential prey.

Tail-bobbing or “wagging” its tail feathers up and down when perched is another noticeable behavior that makes the phoebe stand out. Since tail-bobbing is not practiced by other members of the flycatcher family, it’s a helpful means of differentiating phoebes from pewees and other similar looking birds.

The little phoebe that I watched from my kitchen has been entertaining me since it migrated south in late September. It is one of many Eastern phoebes that will stay here before returning north in April. During the time they spend in Florida, mature birds probably will build nests and raise one or two broods of three to seven babies. Phoebes attach cup-shaped mud and moss nests lined with grass, feathers and hair to niches in embankments or to manmade structures like bridges, barns, windowsills, rafters or ledges. They often return year after year to the same nest, repairing it if necessary.

There’s speculation that the Eastern phoebe’s willingness to build nests in close proximity to human structures explains its ease around people. Last year around this time, a male phoebe spent a good part of most days perched atop a wire trellis in the garden, just a couple feet away from the house. 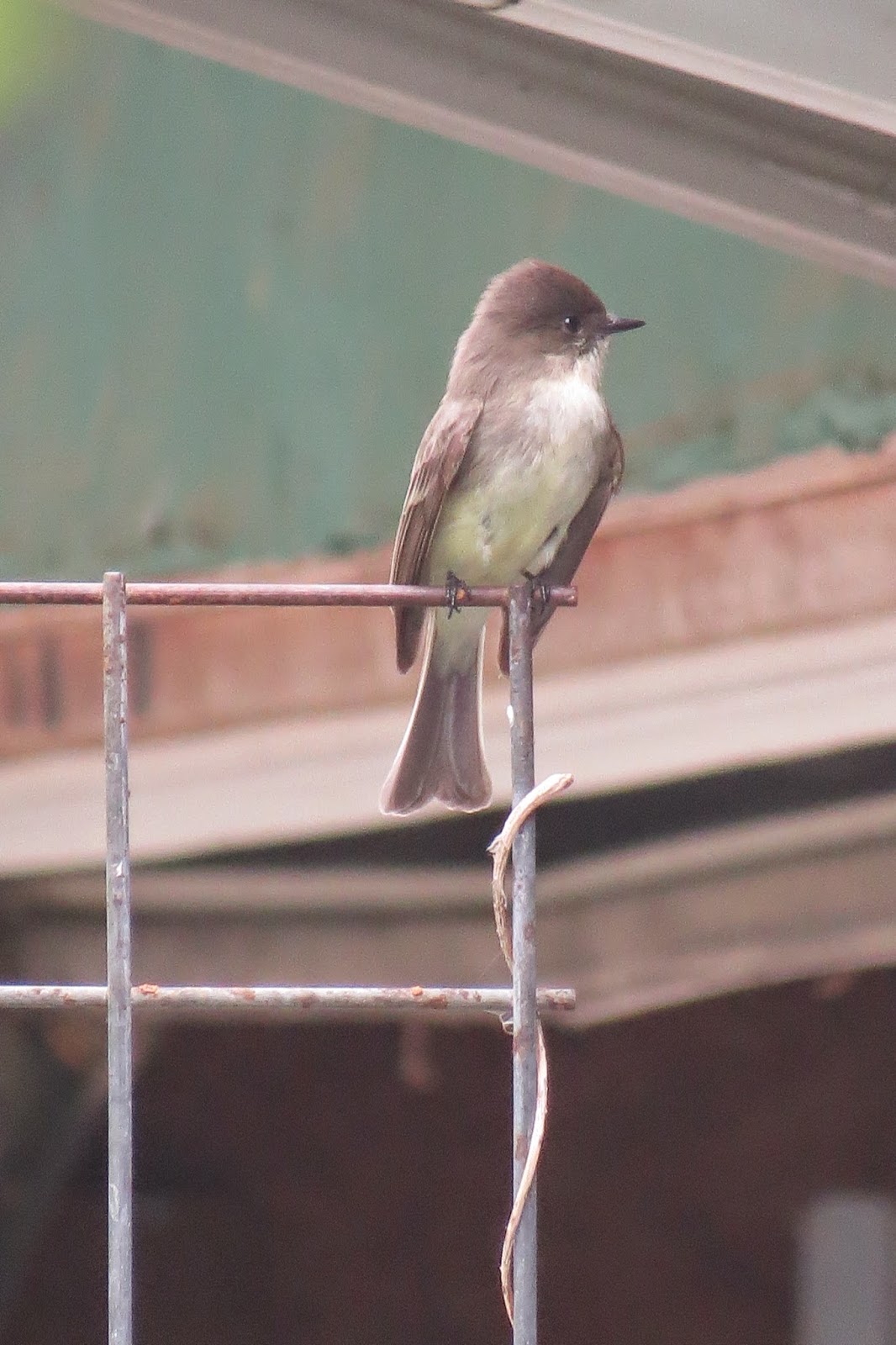 Although my knowledge of birds is still in the early stages, the Eastern phoebe makes learning easy. He poses out in the open, sings an easily recognizable song, presents distinctive behaviors like tail-bobbing and isn’t easily spooked by human interaction. I like the phoebe because it’s such a perky, energetic bird. Neither too shy nor too bold, it keeps our yard free of bugs while entertaining me in the process. The common phoebe may not be the most beautiful bird in the wild but that just goes to prove fancy plumage isn’t everything.