I did something the other day I haven't done in years.

For over an hour. 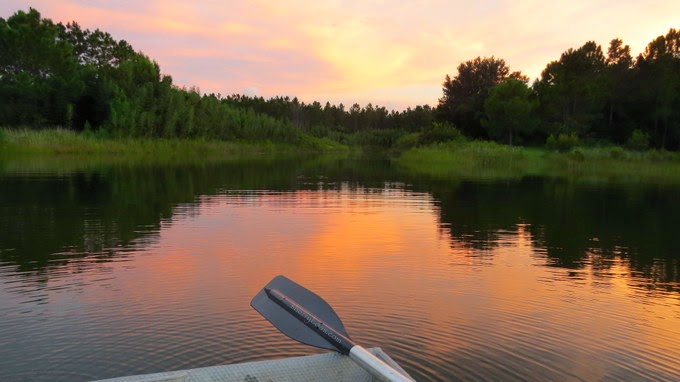 It was a premeditated affair. I packed my camera, a padded cushion, a towel and a good book (and, yes, I took my cell phone along too, just in case…), then I pushed my trusty old skiff off shore and jumped aboard. The wind was coming from the southeast, so that's where I headed.

Once I'd rowed as far as I could, I stopped. I propped up the oars and slid back onto the plump cushion with my head resting against the bow bench and my legs stretched comfortably over the center seat.

I was off. The boat was on. Pushed by the wind, it was adrift. I drifted, too.

Leaning back, I looked up. My view was a crazy patch quilt of sky, clouds and the tips of trees. My music was the percussive beat of lake lapping against aluminum intermingled with a chorus of avian notes. When the boat drifted close to a lakeside thicket, a catbird screeched a warning. Crows cawed. Warblers chattered.

Growing up next to a small lake in Pennsylvania, I used to drift like this every summer. Ever since I received an 8-foot long, square-bowed aluminum rowboat for my 13th birthday — the same boat I row now, 50 years later — it became my solace. Younger kids had treehouses. Older ones raced off in red '65 mustangs. My escape was a small skiff in Silver Lake.

Just as I did the other day, my younger self took objects on those lazy-day rows. I didn't have a camera back then but I had a transistor radio that I brought along together with some fruit, a book, a pad to lean against and paper to write on. I was less conscious of time when I was a teen. Instead of the hour I allotted myself now, back then I could easily spend the better part of a summer day repeatedly rowing to one end of the lake and drifting to the other. My mind didn't fret over other obligations. I didn't worry what else I should be doing. I just drifted along enjoying the ride.

Idleness may be acceptable for teens, but it's not a behavior granted to adults. Yet I think it's important to be lazy now and then. Some people meditate, do yoga or go for runs to clear their mind and stretch their muscles. My meditation is a slow row through still water. Mundane thoughts sift away as my arm muscles strengthen. Even when I'm not actually drifting with my oars up and my feet propped upon the seat, I feel lighter, more relaxed.

But actual drifting, now that's something special. In this busy world, uncharted time is a rare occurrence.

Thanksgiving is only a few days away and while many are busy with holiday preparations there are those of us who choose to escape all the fuss. Rather than being chained to holiday duties, we choose to drift off for a while in a swirl of contemplation. There's so much to be thankful for…not the least of which is the ability to be free. To drift off when we need to. To untether the mind.