Twice the excitement when two eagles visit the lake

I don’t usually see bald eagles on our property. They aren’t regulars like the great blue heron, white egret or the resident pair of sandhill cranes. Nonetheless, every now and then, an eagle drops by to survey the surroundings. It’s usually perched on the bare branch of a dead tree standing along the shoreline of the lake. 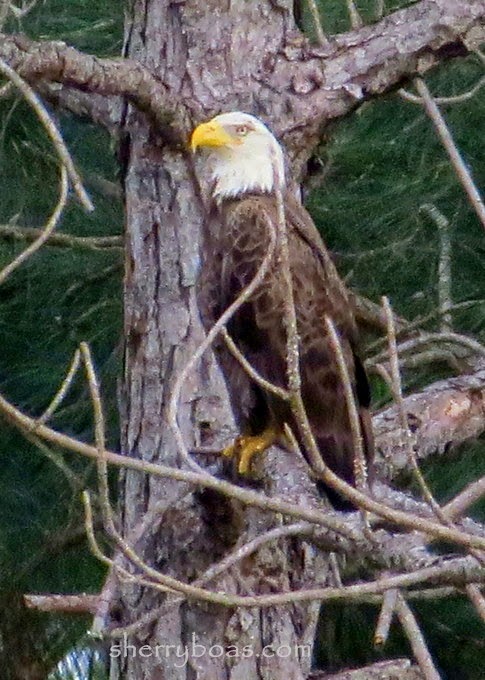 Twice during the past year, I was lucky enough to spot an eagle bathing in the shallow water — an activity I had never seen before — and one time I chanced upon an eagle attempting unsuccessfully to snatch a small duck out of the water.

On each of those occasions, I saw only one eagle, but just the other day, two bald eagles were in the lake at the same time.

It is not uncommon to see bald eagles in Florida. The Sunshine State is home to approximately 1,400 nesting pairs of the majestic birds, third in the United States only to Alaska and Minnesota in eagle populations. When I’m out driving — especially if I’m anywhere near a landfill — I watch for eagles. I look for a large bird with a white head, sitting upright on top of a utility pole, and quite often I spot one.

Despite being our country’s national emblem, emblazed upon the Great Seal of the United States in 1782 to symbolize freedom, strength and longevity, not everyone thinks the bald eagle is the most qualified bird to hold such a position of honor.

“For my own part, I wish the bald eagle had not been chosen the representative of our country,” wrote Benjamin Franklin in a legendary letter to his daughter penned a year-and-a-half after the Great Seal was adopted. “He is a bird of bad moral character. He does not get his living honestly. You may have seen him perched on some dead tree near the river, where, too lazy to fish for himself, he watches the labour of the fishing hawk, and when that diligent bird has at length taken a fish and is bearing it to his nest for the support of his mate and young ones, the bald eagle pursues him and takes it from him.”

On several occasions, I’ve seen eagles do precisely that — let an osprey do the hard work of catching a fish, only to suddenly swoop in and steal the food away in a fierce aerial flight.

In the same letter, Franklin also accuses the eagle of being a “rank coward” because small birds defending their nests often chase it away. Although I’ve seen that happen too, I’m not sure I would characterize the eagle’s behavior the same way Franklin did.

A couple months ago, I watched several crows dive-bomb an eagle perched in a pine tree. The eagle tolerated the crows’ assaults even after they escalated and became more menacing. Finally, the eagle had enough and flew away.

Instead of acting cowardly, it seemed as though the eagle’s retreat demonstrated avoidance rather than a lack of courage. It reminded me of how I feel when I’m sitting quietly in the woods watching wildlife until mosquitoes find me. I tolerate the bugs for a while, but eventually they become too annoying. I pick up my gear and move to a different spot.

The day when two eagles visited, smaller birds weren’t harassing them, and they weren’t attempting to steal prey away from another predator. Instead, I think they might have been involved in pursuits of a more amorous nature.

In the south, bald eagle mating season takes place from September through November, and part of the courtship rituals involves the pair perching, bill stroking and overall body stroking with the bill.

When I happened upon the two eagles, they were facing each other in shallow water. I don’t know what they had been doing before I saw them, but my observations included some intense bald eagle eye contact, face-to-face activity followed by pair perching in the pine tree.

I’d love to think that seeing two eagles — possible mates — by our lake foretells more frequent eagle sightings in the future. However, I’m realistic enough to know that’s probably not how it will be.

Happenstance led me to each eagle encounter in the past, and that’s most likely how I’ll experience them in the future. Whether it’s about specific wildlife or life in general, so many wonderful moments result from being in the right place at the right time.