Since the beginning of the year, I've watched a bald eagle take a bath in our lake on two separate occasions.

The first time happened in January. I was upstairs, readying the guest rooms for a visit from my daughter Jenny, son-in-law Brett and our twin grandchildren when I just happened to glance out the window. As soon as I saw the large, dark, white-topped shape in the shallow water on the far side of the lake, I knew it was an eagle. I ran downstairs, grabbed my camera and dashed outside.

The pictures I took that day came out surprisingly well despite the distance and my shaky-handed excitement. I clicked off numerous shots from my side of the lake while across from me, the eagle splashed water on its feathers, fluffed out its wings and eventually flew to a nearby pine to preen and dry.

Living next to a lake, I’ve had the opportunity to see a wide range of animals splash around in the water, but this was the first time I’d seen an eagle take a bath. I found the experience riveting.

With a population of approximately 1,400 nesting pairs, there are more eagles in Florida than any state except Alaska. At our property, many birds are “regulars,” but the bald eagle isn’t among them. Every now and then, however, an eagle visits. It will fly in, perch on a lakeside tree, sit quietly and check out the action. Unless I happened to see it flying overhead, I may not know it’s there unless crows clue me in.

It would be safe to say eagles and crows are not pals. To people, the large, hooked-beaked bird with sharp talons may symbolize majestic beauty, strength and long life, but to a flock of crows, an intruding eagle represents only one thing: A dangerous threat.

Despite its regal status, a hungry eagle is not above thievery. While its diet consists primarily of fish, this majestic predator will also eat carrion and any small animal it can grab. Eagles are especially partial to whatever food an osprey or crow already has caught. Therefore, whenever crows — social birds that feed in groups — spot an eagle, they waste no time attacking it. I’ve watched crows chase, dive-bomb and scream at their much larger adversary. Their loud cawing demands attention. I can even hear it when I’m inside the house. 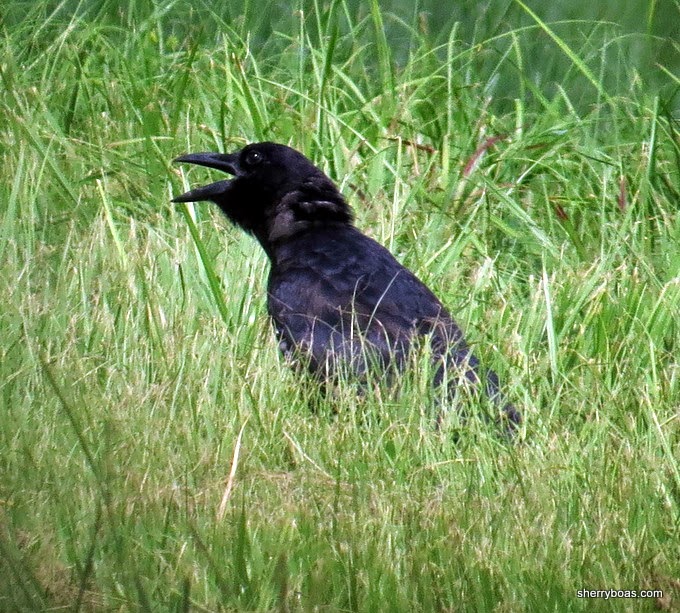 That’s where I was in early March when, once again, I glanced outside and noticed an eagle splashing in the water on the other side of the lake.

Having learned from previous photographic efforts how unsteady my hand can get when zooming in over a long distance, I was now keeping my camera firmly affixed to a tripod. I grabbed the equipment, ran outside to set up the shot and pressed record. In addition to still images, I wanted a video.

Most of us have seen small birds splash about in birdbaths but observing the cleansing habits of an 8- to 14-pound raptor with a seven-foot wingspan is not your everyday sight. Yet, despite their completely different sizes, songbirds and eagles share some similarities when it comes to bath time ablutions. Both do extensive dunking, feather-fluffing, wing-flapping and tail-feather-flaying, and both are also cautious. The eagle, however, seems to take bathing vigilance to a new level. It spends inordinate time in between submersions surveying its surrounding with — dare I say — an eagle eye.

The four-minute video I took that day captured part of the bird’s bath but didn’t include whatever time it spent in the water before I arrived on the scene. It ended just as the eagle flew off to a nearby pine where it devoted even more attention to preening and drying its luxurious coat of feathers.

By watching an eagle bathe in the shallow water of our lake on two separate occasions, I feel like I stumbled upon found treasure twice. Although both experiences were a bit voyeuristic, they were also richly illuminating. I realized no matter who we are, how big or what we represent, the need to come clean is universal. Feathers may fly in the process, but cleaning up our act is not just for the birds.