Plant it and they will come

I have a hummingbird feeder, but it isn’t hanging outside. It’s sitting on a shelf in my closet attracting dust instead of birds. I haven’t put it up because I want to attract hummingbirds with nectar-rich plants instead of artificially colored sugar water.

After months of weeding out garden beds, shifting plants around and installing new cultivars, those precious gems of the sky finally have found my garden.

In addition to being the smallest birds in the world, hummingbirds are also the lightest. The littlest hummer, the Bee Hummingbird, is only two inches long from beak to tail and weighs less than a penny while the largest member of the species, the Giant Hummingbird, is four times as long and 10 times heavier. At 20 grams, it weighs almost as much as four nickels.

Neither the Bee or Giant Hummingbird lives in Florida but all hummers — there are over 300 species — live in the Americas. Of those, 16 are found in the United States, and three, the Ruby-throated, Rufous and Black-chinned, regularly are sighted in Florida.

Hummingbirds have frequented our property before but not often enough to be considered “regulars.” To change that, I decided to establish a hummingbird garden filled with plants the birds couldn’t resist. I decided to place it on the south side of our house just outside the bedroom window where a bottlebrush tree already grew.

With its sticky red blossoms, the bottlebrush tree, Calistemon viminalis, attracts butterflies, bees and other birds so I was confident it would draw hummingbirds, too. In the past when I’ve spotted a hummingbird, it was usually flying from one bottlebrush bloom to another.

My first addition to the new garden was Wendy’s Wish Salvia, a magenta-colored sage that is a cinch to grow, easy to propagate and a known hummingbird magnet. I was thrilled to find one at Simon Seed in Leesburg.

After installing it in the ground, I transplanted some scarlet-colored Tropical Sage plants, Salvia coccinea, to the garden and positioned a raised container of Orange-flame Justicia, Justicia chrysostephana, next to the window in the hope of providing an up-close feeding view.

Once everything was in place, I fell asleep each night anticipating the morning. Would today be the day hummingbirds arrived?

One day it finally was.

“A hummingbird!” I screamed to my still sleepy-eyed spouse. “Look! Right there on the bottlebrush tree.”

I sprung out of bed but by the time I was up, the bird was gone.

With wings beating about 80 times per second and a flight speed of 25-30 miles per hour, hummingbirds look like flashes of shimmery color. After initially losing track of it, I eventually spotted the long-beaked bird a short distance away from the garden methodically going from one aloe vera flower to another. 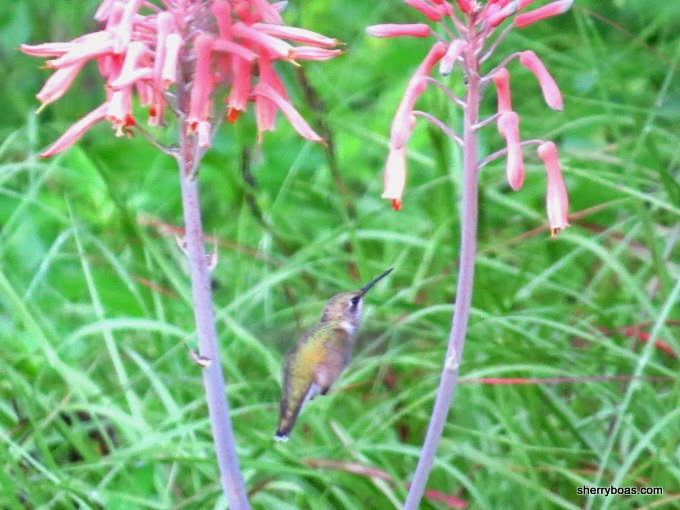 When selecting plants for the hummingbird garden, I hadn’t considered aloe. Yet it seemed an obvious choice seeing how perfectly the hummingbird’s beak fit inside each pale red, pendulous bloom. 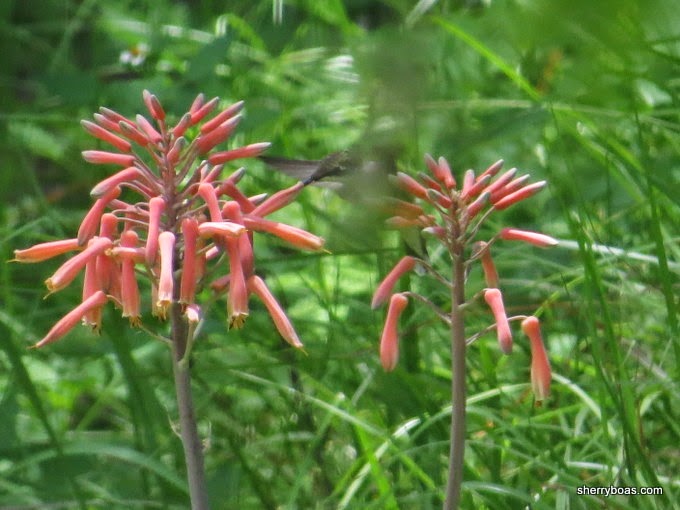 A hummingbird consumes nectar by lapping up the sweet substance with its grooved, hairy-tipped tongue at a rate of about 13 licks per second. Since it must visit about 1,000 flowers every day to gain enough nutrition, it’s not surprising that it sometimes gets tired. While watching the bird at the aloe plant, I saw it stop flying and perch for a few seconds on the plant’s slender stalk. 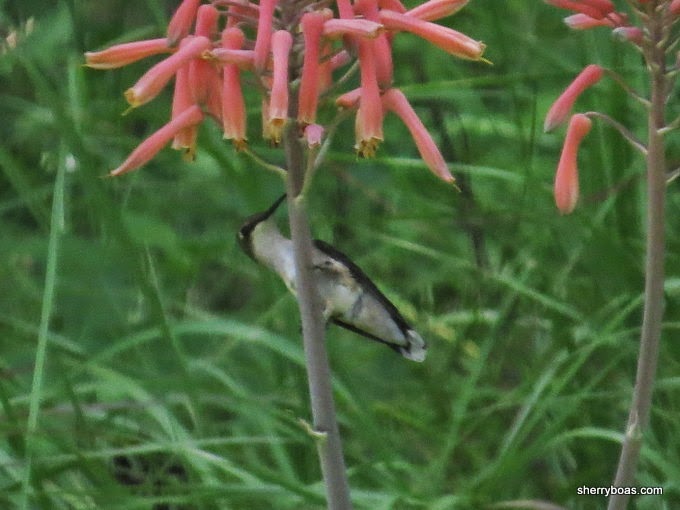 Hummingbird legs are short and stubby. They can barely walk but they can grab hold of objects. In fact, most of a hummer’s life actually is spent perched on a branches or stems. The bird I watched not only rested on the stem, it ate while sitting. Without flapping its wings at all, it stretched its neck upward into the flower.

Since that morning, little capsules of energy have flown into my new garden several times a day — and that only counts the times I’ve been watching. To replenish the immense amount of energy it takes to fly from one flower to another, hummingbirds feed approximately seven times an hour for 30 to 60 seconds at a time. In addition to the aloe, I’ve seen a Ruby-throated hummingbird go to the Justicia and bottlebrush blooms plus both varieties of salvia. I’ve also watched it feed on the bright pink four-o’clock flowers growing in my east garden, another plant that it seems to enjoy.

In the 1989 movie Field of Dreams, an Iowan farmer built a baseball diamond in the middle of his cornfield after hearing an ethereal voice pronounce, “If you build it, they will come.” I’ve discovered the same concept works for gardeners. If you want to attract hummingbirds, leave your store-bought feeder on the shelf. Plant the right flowers, and they will come.
Posted by sherry boas at 5:05 AM