With Mother’s Day just six days away, many folks are focused on what gift to buy, what card to send and how best to express heartfelt emotions. While those are understandably relevant questions and concerns, my thoughts keep wandering to different kinds of mothers.

At our lake, a soon-to-be-mother sandhill crane is sitting on eggs. Each morning, I look through the binoculars to make sure she’s still there. She always is. It doesn’t matter if it’s hot and dry or pouring down rain, foggy mist or sunny morn. Sandhill crane mothers are innately patient, persistent and protective of their future brood. 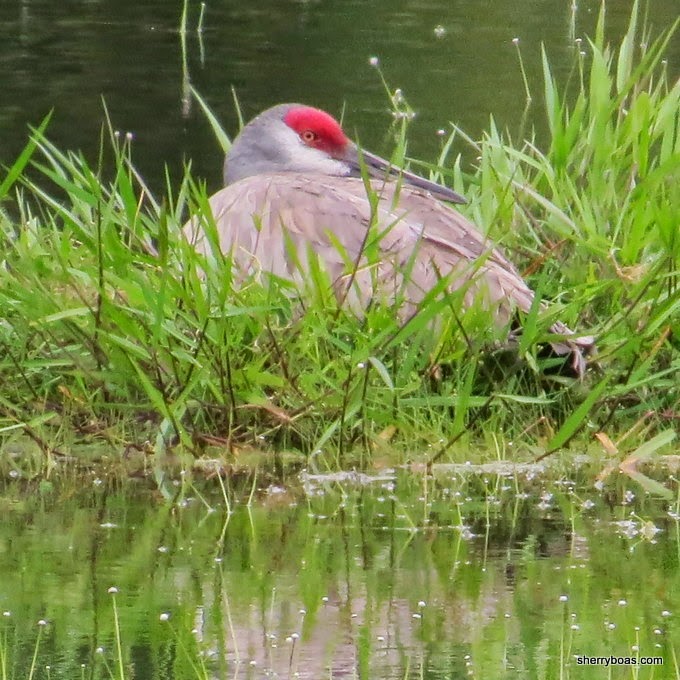 The sandhill crane nest is a soft bundle of lake weeds set upon a small tuft of grass about 30 feet off the shoreline. Although the male crane is often away during the day, he returns every evening to spend nights by her side (sandhill cranes are monogamous and mate for life). Once the eggs hatch — about a week after Mother’s Day — the pair will raise their young together. I’ve watched sandhill cranes raise babies before and have always been impressed by how seriously these magnificent birds take the task of parental responsibility. 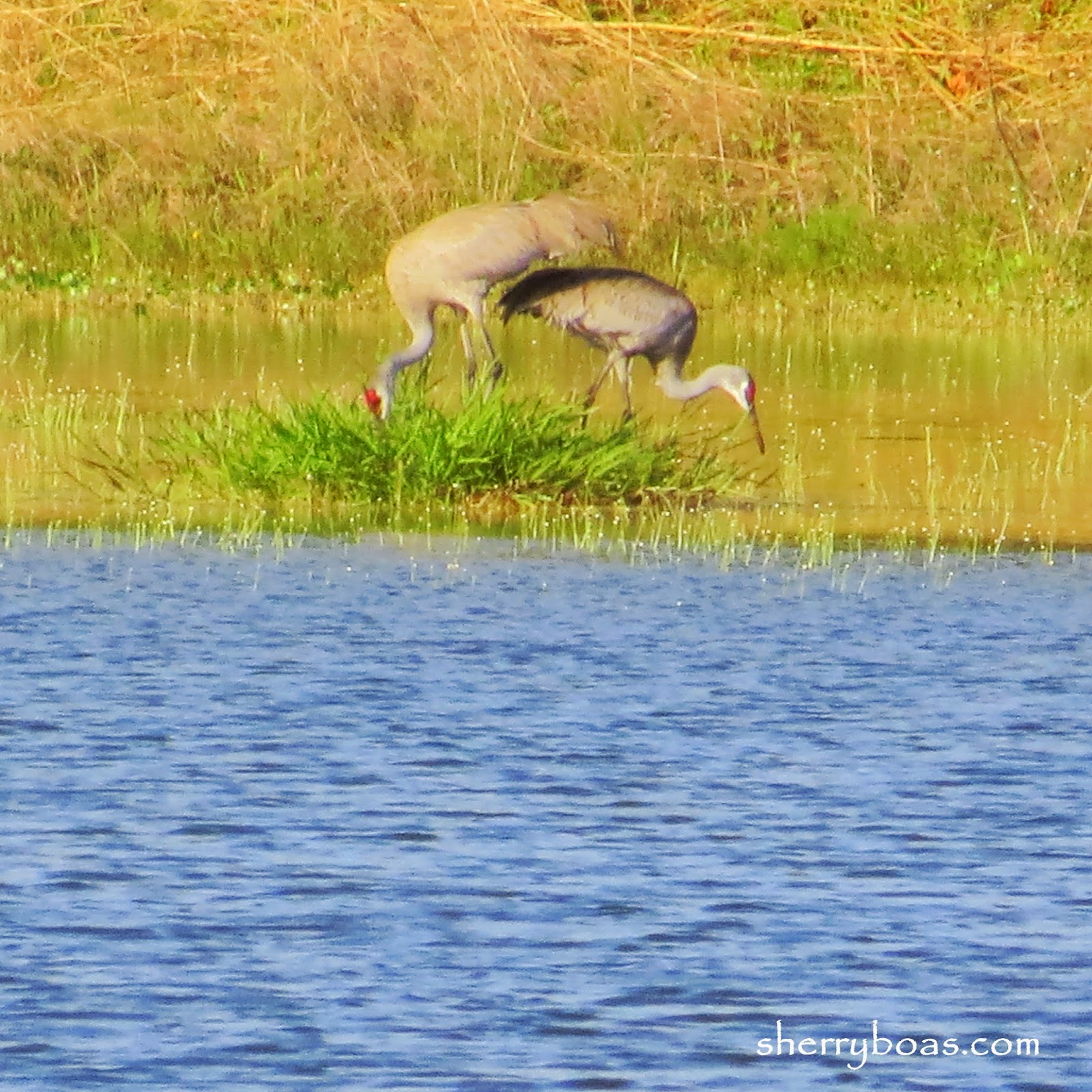 Not far from where the cranes are nesting, a female downy woodpecker is carving out a home near the top of a dead slash pine. I came upon the nest-building bird a couple days ago, but excavation must have begun several days earlier. As I watched from the base of the tree, the bird diligently drilled away at the hole. She exhibited steady effort, pausing only to survey her surroundings for potential threats. 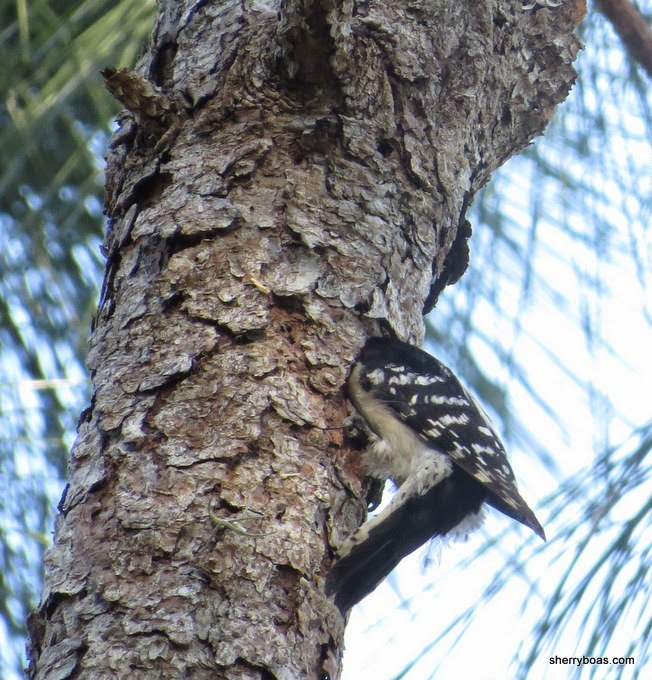 On the day I discovered the downy woodpecker, the hole she had made was only large enough to fit the front half of her body. However, by the following day, the entire bird could disappear within. So much labor went into the creation of a home for future offspring. Although male and female downy woodpeckers typically build nests together, I saw only the female working on this one. The male was nearby, but she was the one pecking away at the wood.

When excavation is complete — a job that can take up to two weeks — the female will lay a clutch of three to eight eggs. At that point, the father steps in to do the majority of incubating. I always find it intriguing how differently nature divvies up parenting chores. In some species, females do all the work. In others, it’s the male. Often both parents share the responsibilities of bringing children into the world.

When the downy woodpecker eggs hatch, both parents will struggle to feed their brood. Yet, despite their best efforts, only one or two of their babies will survive. That often happens with baby sandhill cranes, too. The mother crane usually lays two eggs, but only one chick tends to survive. I can’t help but wonder if they feel sad. 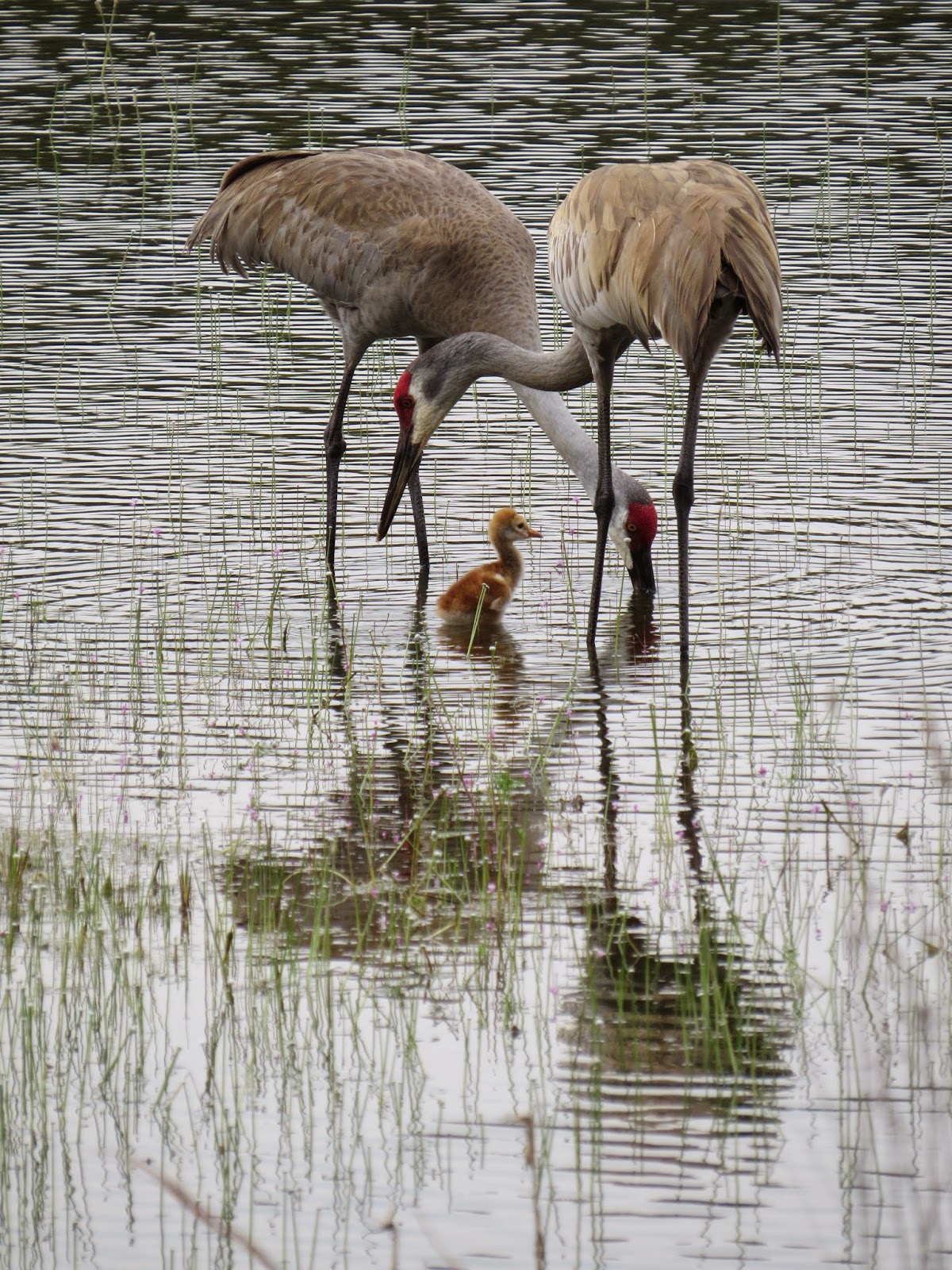 The third parent I’ve been thinking of lately is another woodpecker. A family of pileated woodpeckers lives in a dead slash pine across the lake from my home. Several weeks ago, I noticed several large holes drilled in a snag and shortly after, saw a male pileated woodpecker land on the tree before entering the hole. Although I assumed the birds were nesting within, I didn’t know for sure until I chanced upon a magical moment a few days ago. 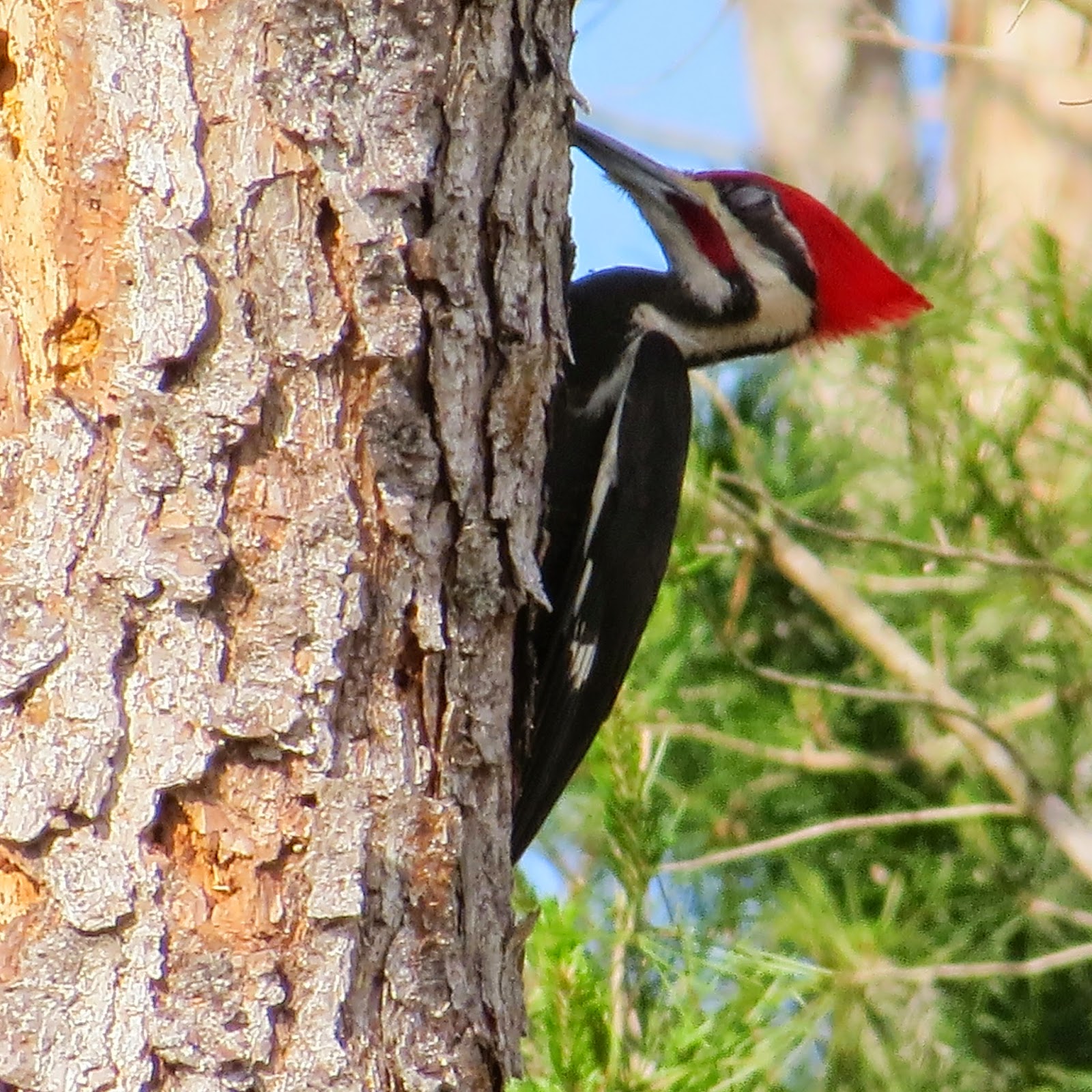 As I was setting up my tripod in the forest in the late afternoon, a female pileated woodpecker flew to the snag. As I watched through my camera, two red-topped heads appeared as their mother approached. 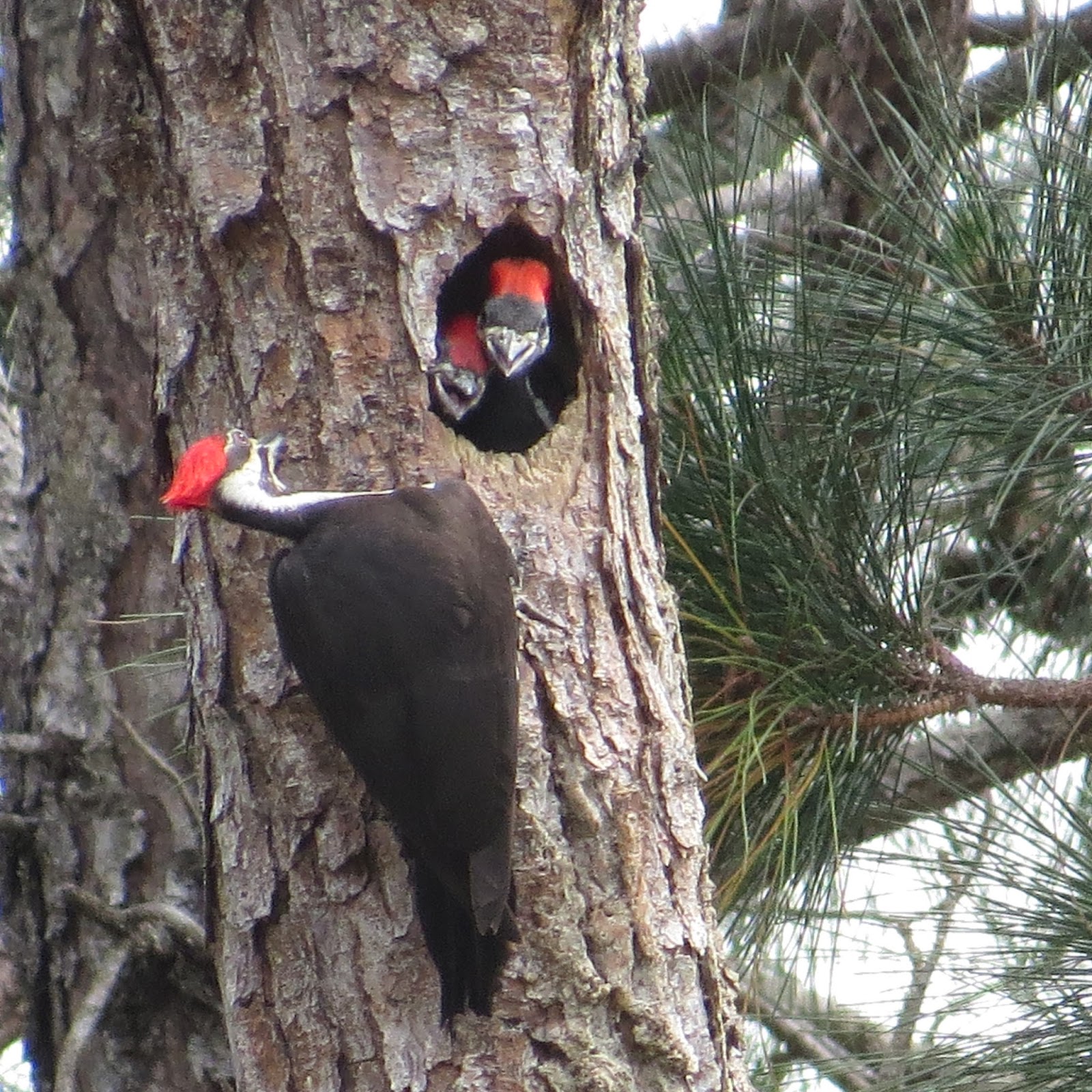 Although I don’t pretend to speak bird, unmistakable cries of “Feed me!” filled the air. Mama bird did her best to satisfy the baby birds’ demands. Nonetheless, one offspring craved more. How do I know? I saw the baby bird peck his mother in the chest with his not-so-tiny beak. Yet, despite his rude and perhaps painful reproach, mother bird did nothing more than reposition herself. She neither erupted in anger as I’ve seen human parents do, nor did she retaliate or disappear. She simply moved out of his way.

You don’t have to look far to see examples of what it means to be a good mom. You don’t need a special gift, card or sentiment to express the wonder that is a mother’s love. Mother’s Day may be around the corner but in nature, lessons in mothering go on every day.
Posted by sherry boas at 6:09 AM