Simply Living
Yesterday, I watched three different kinds of bees fly from one red blossom to another on the small patch of Florida tasselflower in the front yard. 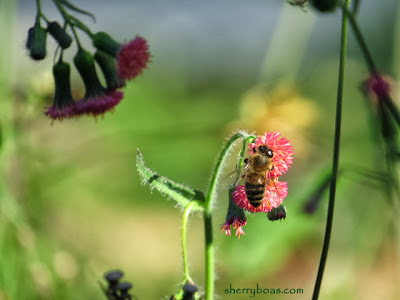 Florida tasselflower (Emilia fosbergii) is a weed. It’s also a pollinator magnet. Butterflies, bees and wasps are drawn to this lowly member of the aster family. 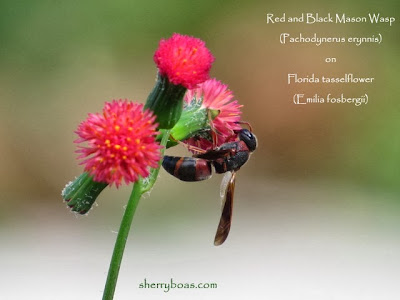 Even though most people consider this annual a nuisance, I like tasselflower. It does pop up in lawns and garden beds — places where it is usually unwelcome — but it also attracts important insects that aid plant pollination.

Although one of its common names is Florida tasselflower (other names include Flora’s paintbrush and Cupid’s shaving brush), Emilia fosbergii isn’t a Florida native. Sources suggest it may have originated in east or central Africa but quickly made its way around the world. It now grows throughout the West Indies, Mexico and South America as well as in Hawaii and parts of Indonesia. In Florida, it appears statewide except in the north and the Panhandle.

I’m not sure when tasselflower found its way into my yard but I remember taking note of it a few months ago. I was sitting outside enjoying the sunlight bouncing off the lake when I noticed a queen monarch butterfly landing on this thin-stemmed flower topped with several bristly red blooms. 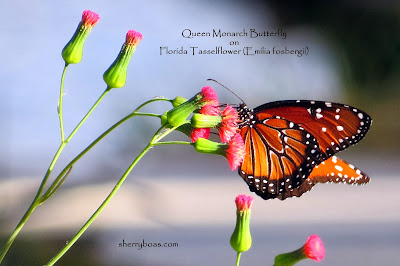 Several other blossoming plants grew nearby, but the butterfly ignored them all, settling repeatedly on this single species, going from one red flower to another. At the time, I didn’t know the plant’s name, but it was obviously the butterfly’s favorite.

Since that day, I’ve learned much about the humble tasselflower and paid attention to it whenever I see it. In doing so, I’ve been amazed by how many butterflies, bees and wasps land on its blooms. The insects come to sip nourishing nectar and, in the process, they do the essential work of moving pollen from one plant to another.

Yet, despite the ability of this pretty little wildflower to attract pollinators ­­— insects that are disappearing at an alarming rate — most people want nothing to do with tasselflower. They want it out of their yard, and they’re not averse to using herbicides to get the job done. After all, they reason, tasselflower is a weed, not a grass. Sure, it’s colorful and doesn’t have thorns or prickly burrs, but it grows taller than grass and that makes a neat lawn look messy.

If the object is to have a weed-free, all-one-level, green-only lawn, I suppose the appearance of volunteer tasselflowers can mess things up. But so can the spraying of herbicides.

Wildlife that eat sprayed plants can be poisoned or even killed by toxic chemicals. Other plants can be harmed by over-spraying and runoff can have negative effects on groundwater.

It seems to me that if volunteer plants such as Florida tasselflower can satisfy the needs of beneficial insects like bees, wasps and butterflies, I should do my best to keep those flowers around. I may not live on the neatest, most manicured property but that’s the way I like it.

Apparently, wildlife likes it too.