Turning onto the paved road from my driveway, I wasn't surprised to see a dead armadillo. In Florida, armadillos are one of the most common victims of highway mortality.

I didn't think about the dead armadillo again until I was on my way home and noticed a contingent of vultures surrounding the road kill. I pulled over for a better look, which of course caused the wake — that's the name for a group of feeding vultures — temporarily to disperse.

What I saw was almost nothing. 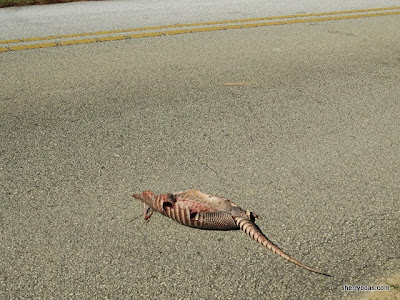 The animal's tough armored skin, long tail and clawed feet remained, but its innards — all soft, edible parts — were completely gone. In less than three hours, the vultures had not only scored a meal but also cleaned up what would have become an unsightly, smelly mess. 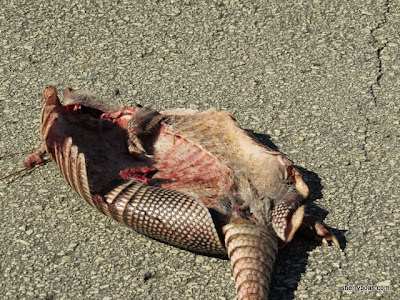 Most of us don't think of vultures as emissaries of aid but, really, that's what they are. These large, less-than-pretty birds are nature's clean-up crew keeping our roads, yards and public spaces free from animal remains. Vultures transform stinky decaying matter into life-sustaining nourishment. If that doesn't earn them our thankful appreciation, I don't know what will.

As I stared at the empty shell of what had only hours ago been an active warm-blooded mammal, I was impressed by nature's efficiency. In addition to vultures, numerous flies buzzed about, busy with their own form of carcass decomposition.

Most people wouldn't give such a situation much thought. After all, neither vultures nor armadillos are beloved animals. Armadillos are despised because they dig holes in yards and burrow under structures. And vultures? Well, they're ugly and eat carrion. What good are animals like these?

The answer is, "very good." Despite the fact that their beneficial acts generally go unnoticed and unappreciated, the work both animals do make the world a better place for human inhabitants.

The pesky armadillo rooting through the Saint Augustine grass isn't digging up lawn divots just to annoy people or for sport. It's foraging for food. The comical looking, nearly blind armadillo picks up the scent of ants, termites, beetles and lawn-damaging grubs, devouring them with a voracious appetite.

Armadillos keep the insect world in check in much the same way the ungainly vulture keeps decomposing matter under control. Both animals help people by doing the dirty work of everyday life.

Wouldn't it be nice if people were as diligent at cleaning up their messes as the animals we dismiss so casually?

Piles of litter mar the landscape along the same stretch of county-maintained road where the bald-headed birds feasted on the unfortunate armadillo. Remnants of meals carelessly tossed from car windows have come to rest alongside used tires and construction detritus. Reminders of human indifference dot the roadside like pocks on nature's face.

It took less than three hours for vultures to eliminate most evidence of the armadillo's existence, but the litter along my quiet country lane will remain indefinitely unless some Samaritan decides to take the time to pick up the trash.

The process of carnage-hungry critters consuming a dead animal is a marvel of the natural world, while tossed-aside trash along the roadside merely exemplifies the blatant disconnect some people have from any life but their own. It demonstrates disrespect and ignorance, along with a lack of compassion and connectivity.

Vultures may be ugly, but humans can be stupid. We're also not very good at cleaning up our own messes.
Posted by sherry boas at 6:12 AM