Simply Living
The Florida scrub-jay is a rare bird. 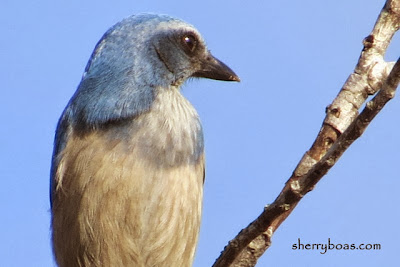 Unlike most other avian species, this bold and beautiful blue, grey and white-plumed bird is friendly to people — even though people are responsible for the disappearing scrub-oak habitat it so desperately needs to survive. 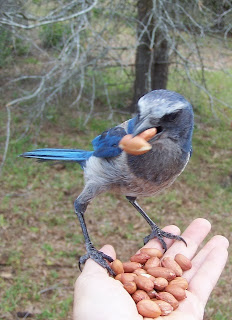 Because its habitat is so specific — dry, sandy upland with minimal low-growing shrubs and scrub oak trees — the Florida scrub-jay is not easy to find. 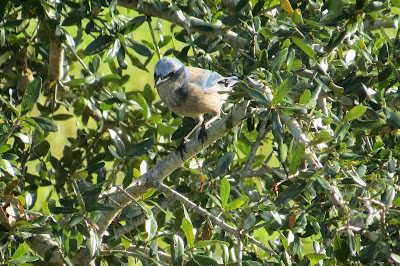 Outside Central Florida, you might not find it at all. The Florida scrub-jay is endemic to fragmented segments of the mid-section of the state, which means it is found there and nowhere else. It is the only endemic bird in Florida and only one of 15 endemic bird species in the entire United States. 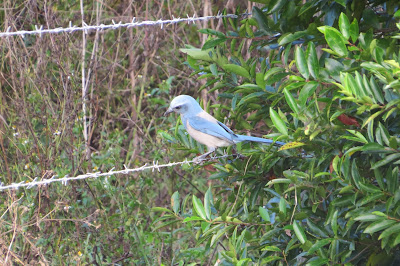 Population estimates for this uncommon creature are in the range of 4,000 to 6,000 adults but unfortunately, those numbers decrease annually. Because of their declining status, Florida scrub-jays are listed as Vulnerable by the International Union for Conservation of Nature and as Threatened under the Endangered Species Act.

Living in South Lake County where several small populations of Florida scrub-jays still exist, I have had the opportunity to observe these rare birds on numerous occasions. Just the other day, I took one of my favorite back roads home from Clermont specifically in the hope of stopping to see and photograph some scrub-jays. 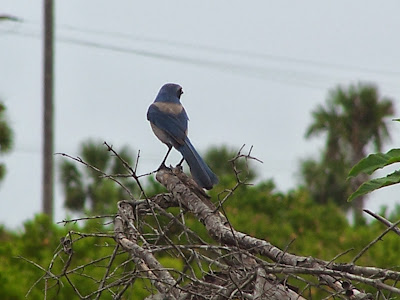 The route I took over Grassy Lake Road in Minneola is a hilly, bumpy two lane through abandoned orange groves and rural homes set on large acreage. It is land where at least one family of scrub-jays has lived for several years. Another rare quality of the Florida scrub-jay is its strong family ties. Considered "cooperative breeders," scrub-jay offspring remain with their parents for at least a year to help raise the next brood and to guard against predators by acting as sentinels from the top of scrub oaks. 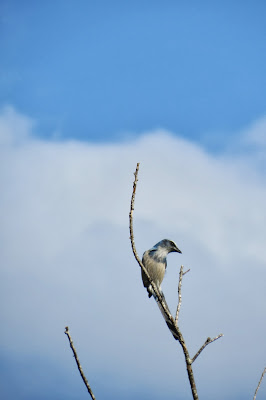 At least for now, the birds that live along Grassy Lake Road are safe. Despite bumps and curves, cars speed by, but the birds seem to have adapted to the noise and fast-moving traffic. Most of the land where the birds now dwell is slated for development. Thousands of homes and commercial structures could be built where families of rare Florida scrub-jays now live. 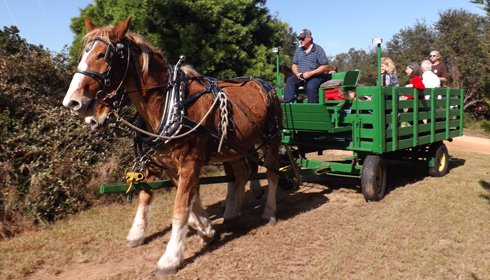 As excited as I am each time I see a Florida scrub-jay, I'm equally thrilled at the opportunity to see John Sebastian perform in person. Sebastian, founder of the group The Lovin' Spoonful, was inducted into the Rock and Roll Hall of Fame in 2000. 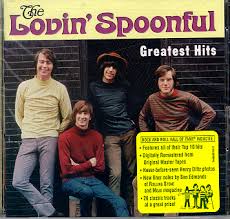 Some of his most memorable hits include "Do You Believe in Magic?", "Did You Ever Have To Make Up Your Mind?" and (What a day for a) "Daydream." In addition to singing, Sebastian also will share stories of the early days of folk music and his performance at Woodstock. He'll explain how those experiences affect his music.

Those of us who live in Central Florida are fortunate to have the opportunity to observe Florida scrub-jays in the wild. However, with opportunity comes responsibility. John Sebastian sings about 'believing in magic,' but it takes more than magic to save a species. It takes commitment and participation by the community at large as well as spreading the word with others.

I've already bought my tickets to the Friday night concert and hope you will too. If you come, please say hello. I'd love to see you there.