Who says you can't grow raspberries in Florida!

We've always called them 'black caps' but most people know them as black raspberries.

When Ralph and I lived on Cape Cod, picking (and eating!) blackcaps was one of our favorite things to do when the fruit ripened in early summer. Black caps canes grew wild all along the edge of wooded areas. To protect ourselves from the plants' prickly thorns, we'd don long-sleeve shirts and jeans before heading out to the woods to gather our bounty.

And what a bounty it was!  Small but sweet with slightly tart overtones, wild black caps were the perfect fruit to usher in the start of Cape Cod's short but welcome warm weather season.

Fast forward several years.  We moved to Florida in 1987 and found ourselves needing to learn a whole new way of gardening. We were told by experts that so many of the plants we loved in New England would simply not grow in Central Florida's semi-tropical climate.

For a long time we believed the experts, but that changed about four years ago when a friend who knew how much Ralph missed his berry fix suggested we try planting Mysore raspberries.

Mysore raspberry is a large scrambling shrub native to the lower Himalayas that has adapted well to Florida's limestone or acid sandy soil. Our friend gave Ralph a young plant to begin with and in just one growing season that small start sent out many new shoots and grew considerably taller.

At maturity, Mysore raspberries top out between 10 to 15 ft tall, which, after four years of growing, is about the height of the multi-caned plants now thriving in Ralph's garden.

Yesterday I went into the garden to check on the raspberries.  I brought my camera with me because a few days before when I was there (without my camera) I noticed many bees on the raspberry flowers. I wanted to see if they were there again.

Sure enough, they bees were busy buzzing around the pinkish-purple blooms flying from one pretty blossom to another as I followed them with my camera. 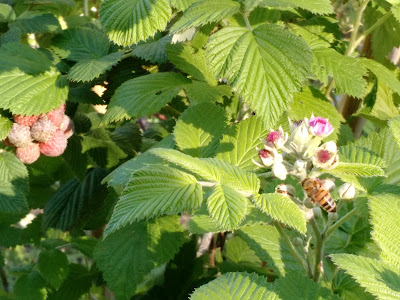 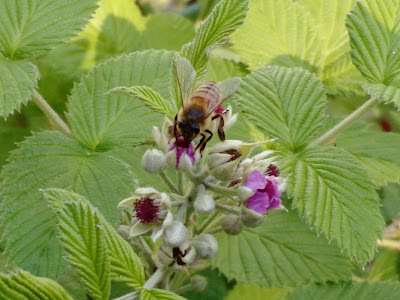 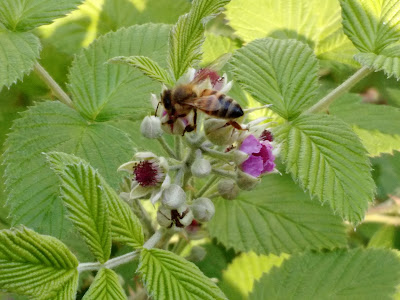 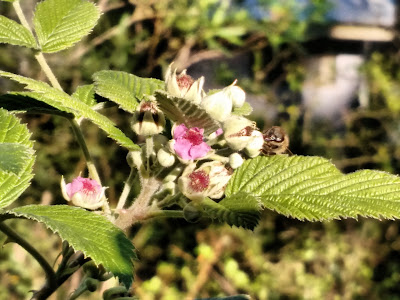 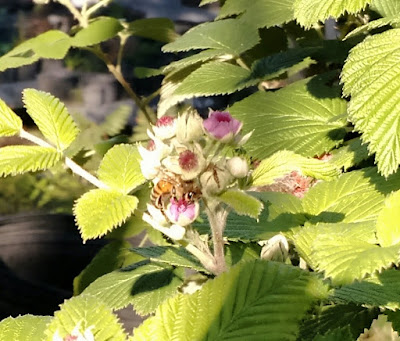 When I finished taking pictures, I gathered a small handful of ripe berries to give my husband. Mysore raspberries aren't nearly as prolific as their New England relatives but they still provide a tasty treat for Florida berry lovers.

While Ralph loves the berries, for me it's all about the wildlife and I was more than delighted to see not only such beautiful flowers on the Mysore plants, but to find so many pollinators attracted to the bushes.

If you're a northern transplant who misses growing raspberries, consider adding some Mysore raspberries to your garden.  Below are two nurseries that sell Mysore raspberries.  If you decide to order some or already have a bed of black caps in your garden, let me what you think of the fruit and how they're doing.  Experts tell us one thing, but those of us experimenting in our own backyards are the ones who really know what works and what doesn't.

The more we learn from each other, the better gardeners we all become. 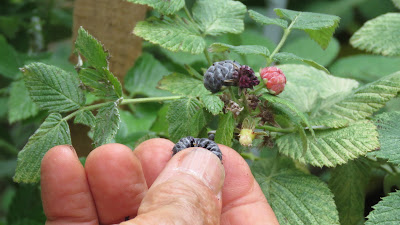