What do you think these ospreys are saying?

I scanned the sky yesterday trying to track down the sound of an osprey calling.  Eventually I located it but much to my surprise, instead of finding one fish hawk screeching out a message, I spotted two.  One was calling as it circled around overhead while the other was responding to those calls from its perch in a pine tree.

Although I was unable to photograph the flier, I took several shots and a short video of the other osprey as it communicated with the bird in the sky. 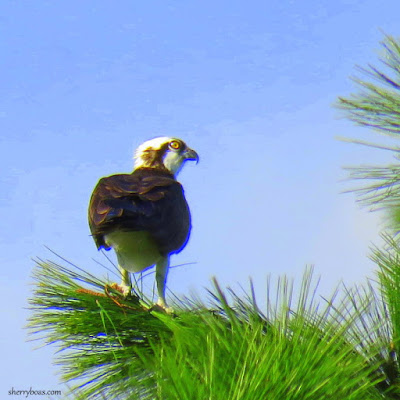 The two birds were definitely speaking to each other but what were they trying to say? Were the calls an invitation to mate or a warning to stay away?  I'm guessing it was the latter since, much to my disappointment, no physical interaction took place.  After several minutes of intense vocalizing, the airborne bird flew away and the treetop osprey stopped flapping its wings and settled down. 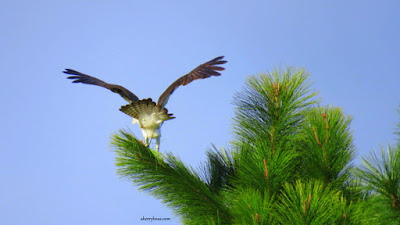 Even without understanding the language of birds, it was exciting to simply watch and listen to such intense interaction between two large birds. As familiar as I am with ospreys - I see them regularly at both our beach and Groveland locations - encounters like the one I had yesterday make me realize how much more there is to learn about osprey behavior and actions. Fortunately, there's fun to be had in not only capturing on film special wildlife moments but also in teasing out the message each new encounter provides.

Share the moment with me by watching the video and let me know what you think the two birds were saying.