Last Tuesday night on our way back to Groveland from NSB, Ralph and I stopped by the UUU center in East Orlando to listen to David Roth perform in concert. 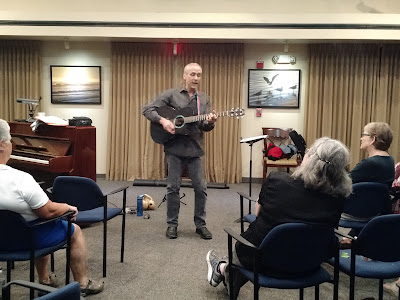 Although less than a dozen men and woman showed up, Dave didn't disappoint.  He put on a very personal, intimate show filled with many new songs as well as old favorites. 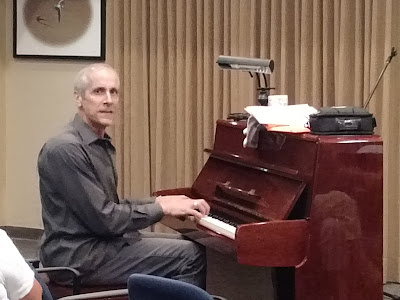 I always find it disappointing how few people come out to support folk musicians.  David has been performing for more than four decades. His music is uplifting, positive and often provides insightful commentaries on current events and world issues.

Below is a video clip and info from his website, www.davidrothmusic.com, about an artist I enjoy immensely and whose music deserves to be heard by more people:

David’s songs (“Rising in Love”, “Earth”, “Manuel Garcia”, “May the Light of Love”, “Nine Gold Medals”, “Spacesuits”, “Rocket Science”, “I Stand for Love”, “That Kind of Grace”, and many more) have found their way to Carnegie Hall, the United Nations, several Chicken Soup for the Soul books, the Kennedy Center, Peter, Paul, & Mary’s “Discovered” (Warner Brothers), the Kingston Trio’s “Born at the Right Time”, NASA’s Goddard Space Center (“Rocket Science” went up on the Space Shuttle Atlantis’s May 2009 mission to repair the Hubble Telescope), the classic folk song books “Rise Up Singing” and “Rise Again” (sequel), and 13 CDs on the Wind River and Stockfisch (Germany) labels. Winner of 4 Positive Music Awards and the 2015 Grace Note (Unity Worldwide Ministries) for Outstanding Contribution to New Thought Music, David has also been featured on many of Christine Lavin’s seminal Rounder Records compilations. The former artist-in-residence at New York’s Omega Institute has also been a songwriting judge at Kerrville, Napa Valley (CA), Tumbleweed (WA), Eventide Arts (MA), the Avalon Festival (WV), and the South Florida Folk Festival.