Cast your ballot for Mother Earth!

There’s at least a little optimism in even the most pessimistic person. We go to sleep at night expecting to wake up the next day. We drive our cars, expecting to arrive at our destination. We make plans for the future assuming the future we imagine will be there when we’re ready.

But what if it isn’t? What if tomorrow’s world is turned upside down? What if the result of the upcoming election causes mayhem with further-reaching repercussions than most of us can imagine?

I am an optimist by nature but the upcoming presidential election has me anxious about the future. So much is at stake. Our planet is in danger.

I feel like we’re not just electing a leader of the ‘Free World.’ We’re electing to have a world at all.

I don’t want to push the panic button. But I don’t want a president to push it either. I want a leader who understands balance. We stand on a precipice of pronounced precariousness. I want a strong leader who knows how to hold steady without being overbearing, overacting or tilting the balance of power.


All too often as election day nears, I find myself seeking solace in nature to escape the onslaught of political rhetoric.

I step outside to watch the sunrise. Every morning it rises in the east. But on some days the sky is so cloudy, I can barely see it. Still, I know the sun’s there spreading warmth and light on all parts of the planet no matter how minute or seemingly insignificant.

That’s how I want my president to be. I want a leader of indiscriminate light. A person who will illuminate the future instead of cloaking it in darkness. I want a leader with the power and presence of mind to persevere through problem times. Someone who stays bright and true spreading light and warmth even during days when the sky is filled with clouds.

For them - for all of us - I urge you to vote. Tomorrow is election day. Go out and cast a ballot for Mother Earth! 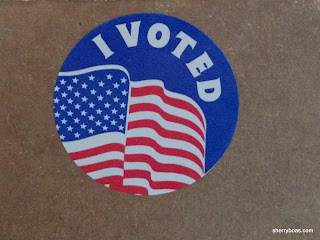