These boots are meant for walking...except when they need repairs

Nobody could mistake my husband for a clotheshorse.

On a scale of 1 to 10, Ralph’s interest in fashion is a minus 4. His wardrobe consists of about a half-dozen ratty tees and an equal number of ripped, frayed or stained pairs of shorts. He calls these items “work clothes” and doesn’t mind that they look a mess. I call them unacceptable for anything but work and insist he set aside at least one unstained shirt and intact pair of shorts to wear when we go together to town.

My husband owns one pair of pants — ‘Why would I need any more?’ he asks — worn only when he’s pruning trees. For chilly weather, he has a couple of old sweatshirts, a fleece vest and a knitted hat.

Although he’s about as far from a fashionista as one can get, that doesn’t preclude him from having specific preferences. Consider his work boots.

A few weeks ago, I walked outside, only to stumble upon a jumble of footwear prominently parked on the concrete pathway. 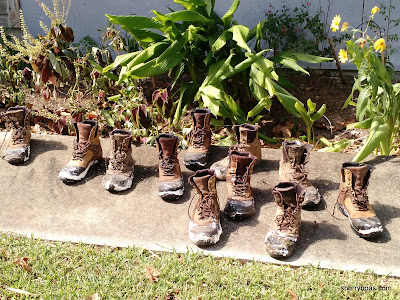 “What’s going on, Ralph?” I asked. “Are your boots having a party?”

The footwear in question — six pairs of steel-toed, ankle-high, lace-up boots in various stages of disrepair — are made by a company my husband discovered about 12 years ago. He loves those boots. They provide just the right support and comfort he needs in a work boot. Unfortunately, they’re no longer being made. The manufacturer went out of business a few years ago, and my shopping-adverse spouse has been unable to find a suitable replacement.

However, practical guy that he is, Ralph stocked up before the company bottomed out. Over the last decade, when one set of boots became too worn out to wear, he’d go up to the attic, open a new box and break in another pair. But even the most pragmatic planner eventually works through his stockpile, and that’s what happened the day I chanced upon his stash of worn-out footwear outside on the walkway. 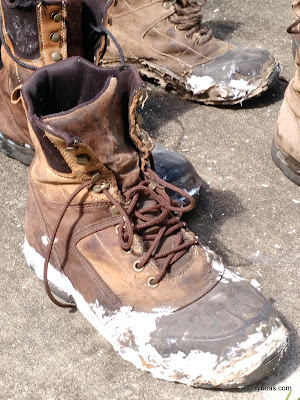 “I’m letting them dry,” Ralph said. “I just caulked them, but they need to sit in the sun for a while to dry.”

Now I’m no carpenter — that’s my husband’s bailiwick — but I thought caulking was to smooth gaps in wood, fill cracks and seal seams. I mentioned this bit of insight to Ralph, and he simply smiled. “That’s right,” he said. “It works on shoes too.”

I suppose it makes sense that a fellow whose wardrobe consists mainly of raggedy items wouldn’t have a problem covering his feet with heavily-caulked boots. As long as it works, what does it matter?

And it did work.

After a few hours in the sun, the caulk hardened, and his boots were functional again. I won’t go so far as to say that they were as good as new — that would be overstating. But they’re usable, and for now, that’ll do.

Maybe some day in the not so distant future, I’ll make Ralph put on that one unstained shirt and untorn pair of shorts and insist he go into town to shop for new boots. If he’s lucky, my picky spouse might even find another pair he likes almost as much as the ones he has now. If that happens, I expect he’ll buy more than one pair because when you find something you like, you stick with it. And I’m sticking with him. I married a man of many talents. He may not be the sharpest dresser on the runway, but he’s a sharp thinker, not to mention the least clothes-minded person I know.
Posted by sherry boas at 5:26 PM