It was late afternoon. The sky was still light although the sun had begun its determined descent toward the western horizon. I stood looking out my kitchen window considering options. My husband Ralph was still outside working in his garden, and I needed to take a break from the computer. I figured there was a good half-hour or so before dinner — enough time to devour another chapter or two of Jodi Picoult’s latest novel, “Small Great Things.”

It wasn’t a difficult decision. I grabbed my camera, phone and the travel mug of tea I’d been nursing for the last few hours, picked up my current read and went outside. Plopping myself down in one of the chairs by the lake, I positioned my items on a table so each would be within reach if needed and settled in for a relaxing bit of outdoor reading time.

That’s not what happened.

Before I even had a chance to open the book, I heard the familiar rattling call of a Belted Kingfisher in flight. Looking up, I saw the foot long, grayish-blue, white-banded bird making a beeline to one of the mid-lake posts that we’d installed long ago for waterbirds to have a place to rest, preen and eat their catch.

Instinctively, my hand reached for the camera. As the Kingfisher landed on one of the perches, I zoomed in for a closer look and was surprised to find a large fish clamped tightly in the bird’s strong, two-inch-long black bill. 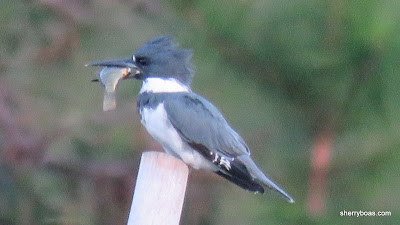 As its name implies, Belted Kingfishers are royally good at catching and eating fish. With an unusually large tufted head, these 10- to 14-inch long inhabitants of fresh and coastal waterways throughout North America have been dining on fish in our lake for years. Despite their familiarity with me and our property, the pair of Belted Kingfishers that call our lake home remain remarkably wary of humans. If one of the birds happens to see me when we’re both by the lake at the same time, it immediately will change course and fly to as different a part of the lake as possible. Good thing I don’t take such actions personally.

That’s why on this occasion I was startled to see that the kingfisher not only landed on the mid-lake platform when I was outside but seemed so oblivious to my presence.

I suspect its judgment was hampered by more immediate matters such as how it was going to devour the giant fish it was carrying in its pincher-like bill. I switched my camera from still-shot to video mode and watched the action. The action was brutal.


Over and over, the kingfisher hammered the dying fish against the wooden platform until blood dripped from its silvery, scale-covered body. Once the fish was decidedly dead, the predator proceeded to reposition its catch for swallowing. Little by little, the bird turned its meal around until the fish’s body rested completely within the grasp of its bill. It was only then that the actual process of eating began.

Goodness, how it swallowed! I’ve watched snakes separate their jaws to consume frogs much bigger than their mouths, and I’ve seen Great Blue Herons eat snakes. But this was the first time I’ve actually watched, moment-by-moment, the steady, sure effort of a Belted Kingfisher eating a fish that looked way too big for it to swallow.

When the deed was done — after a vast expansion of its throat and several burp-like movements — the Kingfisher flew away. By then, the sky was already beginning to darken. Evening had arrived. I picked up my travel cup of now tepid tea, juggled the cell phone, camera and book in my arms and made my way back inside. The Belted Kingfisher had already had its dinner. It was now time to make my own evening meal. And, no, fish was not on the menu.
Posted by sherry boas at 4:48 AM