When we purchased a home in New Smyrna Beach in March 2015, we inherited four hibiscus plants in four different colors.  The smallest hibiscus produces a beautiful yellow flower with hints of orange on its petals and stigma. But, because it was growing in the shade of two other hibiscuses, it wasn't doing as well as it could. 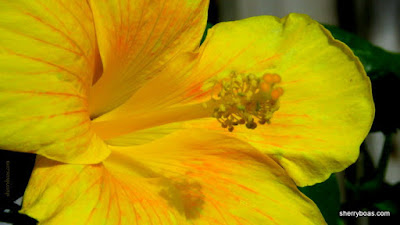 Since Ralph and I both like the color of that flower very much, Ralph decided to help the yellow plant giving it more room to grow.  To do so he had to remove one of the hibiscuses growing next to it. 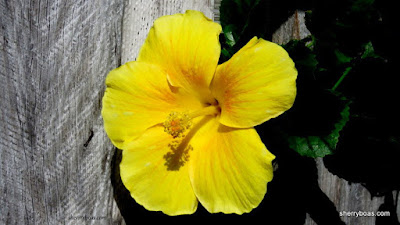 The one we chose to dig up was also beautiful with an unusual multi-colored bloom.  After potting it up, we brought it back to Groveland and Ralph has been nursing it along ever since. It has adjusted well to being removed from the place where it was growing.  It has even begun to flower.  As soon as we can figure out where to put it, Ralph will take it out of the nursery area and plant it back into the ground.

In the months following the removal of the multi-colored hibiscus, the yellow hibiscus has taken off.  In addition to now having more sunlight, I'm sure its growth was helped by all the compost and mulch Ralph added to the soil as well as the extensive pruning he gave it so more of the plant's energy would go into new growth upward instead of branches and greenery down by the ground.

About 8-feet away from the yellow one is an extremely tall red-flowering hibiscus.  This plant doesn't produce the largest nor the fanciest flowers but it is a prolific bloomer with dozens of bright and cheery and flower faces to catch the eye of the occasional hummingbird of pollinating insect. 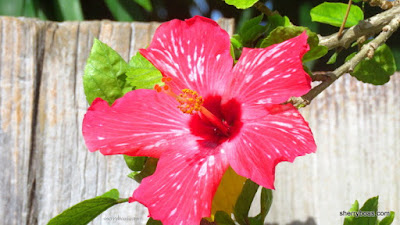 The final hibiscus adorning the landscape is a pink variety with yellow anthers and red stigma.  Its flower is broad and bold with a soft insistence.  It's hard to pick favorites, but if I had to, I might just pick the pink hibiscus as my favorite of the four. 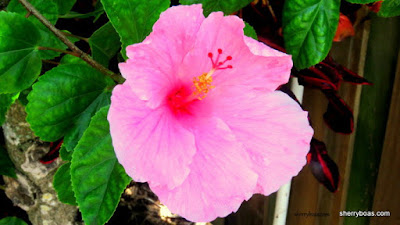