I recently installed a new perch in the middle of the lake on our property near Groveland.

I found a dead bamboo cane in a large clump of Giant Timber Bamboo and dragged it down to the water. 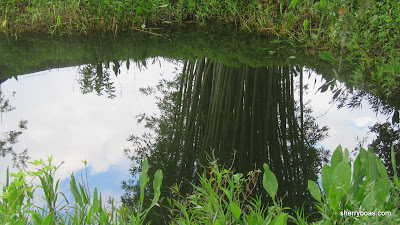 The cane, about 30 feet tall with a four-inch diameter base, tapers to less than a half-inch at its tip. I intentionally left most of the side branches intact hoping that birds would land on them. 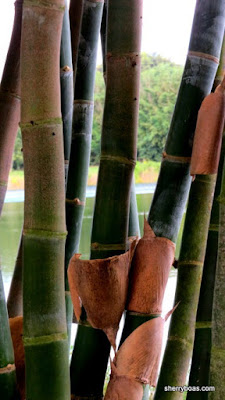 Installing the perch didn’t seem like it would be difficult. I thought it would be a small project I could accomplish by myself.

It started off well. 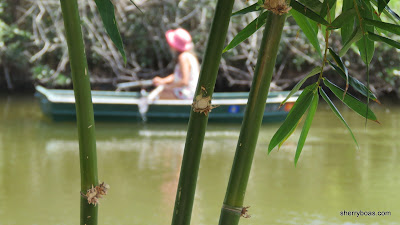 Transporting the long pole from the shore to the middle of the lake worked as I hoped it would. I balanced it down the length of my small boat and rowed slowly to my destination. The bamboo slipped off only twice.

Things got a bit more dicey once I arrived.

After reaching the submerged island, I stood up in the boat to lift the bamboo cane into an upright position. Unfortunately, my pre-installation calculations didn’t take into account how heavy and unwieldy a tall, wet, large-diameter bamboo pole can be. Try as I might to drive the pole into the soft peaty soil — I gave it several wet and slippery attempts — I couldn’t push it in far enough to hold steady. Instead, it leaned this way and then that way. The harder I tried to force the pole down, the farther out my boat drifted.

I knew I needed help — I had become a human bridge. My hands were holding onto the bamboo pole. My feet were in the boat. My body was stretched over the water between the two.

I called to my husband Ralph, who was watching from the shore with a bemused grin on his face. He quickly came to my aid.

With two of us working, we completed the job quickly. Ralph secured the pole deep into the submerged peat island. Once it stood straight and solid, I rowed back to the shore, content with our accomplishment.

The new perch was in place. Now all I had to do was wait for birds to find it. I didn’t have to wait long.

The first bird I saw sitting on one of the side branches was a bluebird.
Soon after, several crows perched followed by a belted kingfisher.
Recently, however, I’ve spotted some new and exciting visitors. A flock of swallows discovered the mid-lake resting place and have monopolized it ever since 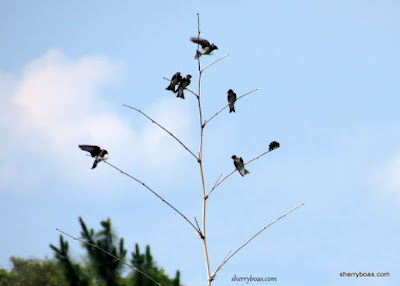 For the past couple weeks, the swallows — possibly northern ruffled-winged, bank or tree swallows —— have been spending most daylight hours either swooping over the lake in search of insects or perched on the branches preening, chattering and pecking at each other congenially. Swallows are social birds that gather together in small flocks to feed, rest and, for some species, to nest. 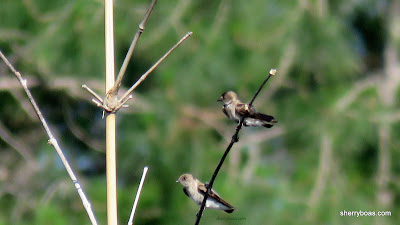 I’ve counted about a dozen of the small, white-bellied, brownish-gray feathered fliers perched on different branches of the bamboo pole at the same time. However, the number of birds changes constantly. Swallows are continually leaving their resting spot to catch insects on the fly. Yet, the new perch is rarely unoccupied. As birds fly off, others take their place, often vying over which bird gets the top spot.

Including my newest addition, the submerged mid-lake peat island directly across from our house now supports five different kinds of perches. While all get used, certain species have preferences.

Herons, anhingas, cormorants and kingfishers gravitate toward the platform perch while ospreys and eagles like to land on the top of tall poles without branches. Now swallows, as I’ve recently discovered, are drawn to perches with enough side branches for an entire flock of fliers.

My simple project turned out to be more challenging than expected. To ask for help, I had to swallow my pride. But because I did, swallows have arrived.
Posted by sherry boas at 5:18 AM