There’s a little lake in downtown Clermont that I always admire. It’s name is Sunset Lake but a more appropriate moniker would be Lake Lotus because this small splash of water nestled in a hollow between SR 50, 12th St., Chestnut St. and Linton Ct. boasts a spectacular display of Nelumbo Lutea, a Florida native aquatic plant commonly known as American lotus. 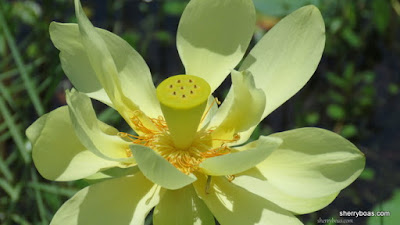 The other day, instead of observing the water plants from the car window as I normally do when I’m out doing errands, I decided to pull over to see the yellow blooms up close. Since there is no public access to the pond, I pulled into the paved parking area of South Lake Animal Hospital located on the lake’s western shore. From there it’s only a few steps to the water.

Despite noise from traffic on busy SR 50, the lotus-filled lake proved a serene setting. A large white egret feeding in the shallow water flew a few yards farther down the shoreline when I came on the scene but its presence merely added to the beauty of the calm lake dotted with moss-draped cypress trees and yellow lotus flowers in various stages of development.

The American lotus likes to grow in muddy, shallow water along the margins of lakes. It’s an easy plant to identify due to its distinctive flowers, seedpods and leaves. 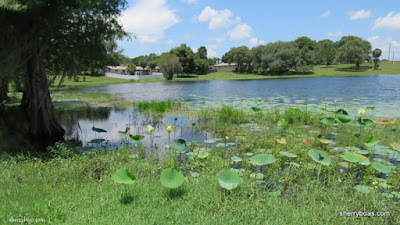 The flowers, which bloom May through August and stand several feet above the water, can be up to 10-inches wide. They are a soft, buttery color with multiple petals surrounding a profusion of crinkly dark yellow stamens. Leaves growing from the center of a sturdy stem are large and round, about the size and shape of a party platter. Each leaf either rests upon the water surface or extends two to three feet above it on a tall, stiff stalk. Unlike water lilies, which are also found in shallow ponds and have a slice in their leaves, lotus leaves are completely circular without any cut in them at all. 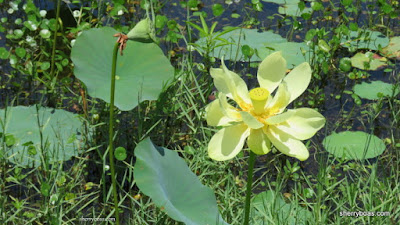 As impressive and pretty as the plant’s lightly fragrant flowers and big circular leaves are, its seedpods are what drew me in. From my soggy-footed observation spot, I photographed American lotus seedpods in various stages of development. 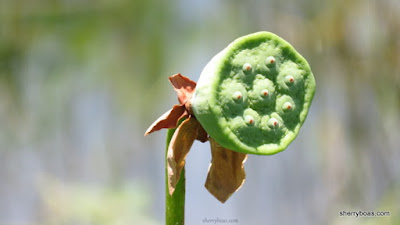 Those just beginning to form were still yellow with a cone-shaped appearance while the most mature specimens were dark brown, had flattened out and were spotted by numerous large black seeds. When filled with seeds, the pods look a bit like round rainfall shower heads. 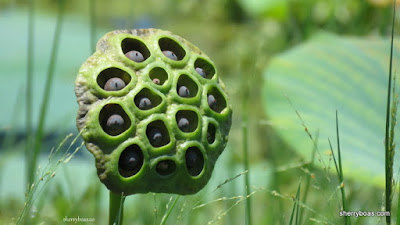 Other than their beauty, I knew very little about lotuses before my impromptu visit to Sunset Lake. Once I there, however, my curiosity was piqued. I’ve since learned that in addition to American lotus, Nelumbo Lutea is also known as yellow water lotus, alligator buttons, duck acorns and pondnut. Several of those names refer to the plant seeds, which are a valuable food source for wildlife ranging from ducks to alligators to beavers and muskrats.

But animals aren’t the only ones to take advantage of the plant’s nutritional value. All parts of American lotus are edible.

For thousands of years, people have gathered lotus flowers, seeds, leaves and roots for culinary and medicinal purposes and the plant continues today to be an essential component in recipes for many Asian cultures. The lotus flower also has a long history of spiritual significance in Buddhism and Egyptian mythology.

Nowadays in the United States, we’re less likely to be eating parts of the lotus plant than we are to be receiving them from a florist. Lotus seedpods are a popular feature in floral arrangements with the dried pods adding an attractive, decorative element that suggests tranquility.

Tranquility is what I was feeling after my impulsive decision to stop and look at the pretty flowers growing in downtown Clermont instead of just glimpsing them yet again from the window of my car. The few minutes it took to find a place to park and to stroll along the shoreline didn’t prevent me from getting my errands done. I didn’t miss any deadlines. I wasn’t late getting home. What it did do was make me smile. I had fun taking pictures and enjoyed learning about a plant I knew very little about before. Not a bad exchange for a few minutes of my time.