I have a new BFF.  In garden-speak, that means Best Flower Friend. 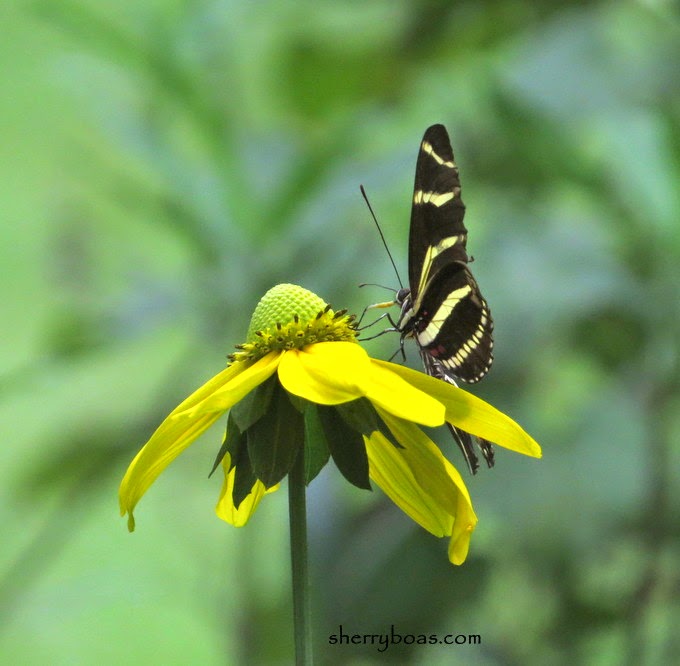 Her name is Rudbeckia laciniata, but I like to call her Cutleaf Coneflower.  While my new BFF is a Florida native, she grows just as well in Zone 3 as she does in Zone 9.  During an early August trip to western Mass, flowery displays of Cutleaf Coneflower were ubiquitous in the residential neighborhoods I visited.  Although less common in Central Florida, this member of the Aster shows off her yellow daisy-like flowers in late summer, continuing to paint the landscape with cheery color throughout early fall.

Related to the more familiar, Black-eyed Susan, one of the main differences between the two perennial plants is their central disc.  In Black-eyed Susan, the petals extend from a dark black circle while in Cutleaf Coneflower the central orb is slightly green, growing darker and more raised as the flower matures.  The greenish tone is responsible for one of Rudbeckia laciniata’s other common names, Green-headed Coneflower.

However, no matter what you call her, there’s no denying this flower’s impressive height.  Topping out between 3 and 12 feet tall, my lanky friend towers other many of the neighboring blooms.  While not a demanding plant, Cutleaf Coneflower does have her preferences.  She prefers a partially sunny location with enriched, irrigated soil.  In my gardens, I planted this new addition on the southern side of the house in two locations where broad trees and a clump of dwarf bamboo filter some of the sun’s rays.

For the first few months of our acquaintance, a mound of large, lobed foliage was the only present this plant presented.  As the months went by, the leafy crests grew bigger and broader and I found myself wondering what I’d gotten myself into.  What kind of flower, if any, would this new plant produce?  Admittedly, the foliage was pretty.  But did I really need another non-blooming plant taking up valuable garden real estate?

The answer arrived at the end of July, shortly before I left for New England.  Cutleaf Coneflower was finally ready to show her true colors.  Suddenly, my garden was ablaze with abundant blossoms.  Bright yellow petals emerged atop tall flower stalks and I wasn’t the only one to notice.  Bees, butterflies and even hummingbirds were also paying attention.

The other day, in need of a bit of garden therapy, I positioned myself on a plastic chair in a corner of the garden in hopes of catching a wildlife show.  I wasn’t disappointed.  Within moments, I began to see bees.  Lots of bees.  Pollen sacs on the bees’ forelegs grew noticeably fuller as, one after another, the bees derived sustenance from the profuse yellow blooms.

Gathering pollen from Cutleaf Coneflower blooms may have increased the load for the bees to carry home to their hives but watching so many beneficial insects visit the garden made my load feel lighter.

I suppose that’s what friends do.  They make us feel better.  Cutleaf Coneflower is generous without being demanding, beautiful without being boastful.  My new BFF may not be human but it doesn’t matter.  I give her a place to grow and flourish and in return, she provides soothing relief from everyday stresses.  It’s a good deal both of us -  I think the bees are happy too.
Posted by sherry boas at 11:12 AM