To plant or not to plant...

SIMPLY LIVING
When I visit my daughter in Winter Garden, I often take back roads instead of the highway.  I find back roads more interesting with their twists and turns, pretty views and occasional surprises.  Sometimes I see unexpected wildlife, but more often, I spot an unfamiliar wildflower growing along stretches of yet-to-be developed land.

Last week on the drive to Amber's house, I noticed an reddish-orange-flowered vine scrambling over the underbrush along a yet-to-be developed stretch of roadside. 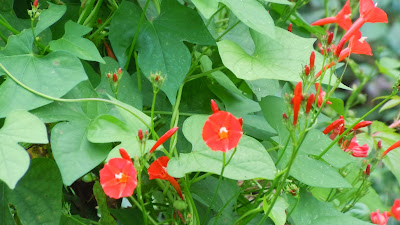 Long after I returned home, the pretty vine kept twining through my mind.  I wondered what it was and if it was a native plant or an invasive exotic.  Over the years, I’ve learned to be careful with vines.  All too often I've made the mistake of introducing attractive climbers to our landscape only to find out after they became established how difficult they are to control.

Although I didn’t pull over last week to take clippings of the unfamiliar bloom, my resolve weakened a few days later when I found myself along the same stretch of two-lane road.

It only took a couple minutes to pull onto the shoulder, hop out of the car - clippers in hand – and snip off a few lengths of the sprawling vine.  While there, I snapped a few pictures as well.  My plan was to look up and identify the vine when I returned home then post pictures online before planting.  If I received enough positive feedback – reassurance that it wasn’t a known problem plant and wouldn’t spread like crazy – maybe I’d add it to our landscape.

The plant turned out to be Ipomoea cocchinea (CQ), native to the eastern United States.  It has many common names including red or scarlet morning glory, scarlet creeper and redstar, a moniker referring to the star-shaped, pale orange throat of the flower’s small tubular blooms.

To help me with my decision, I posted a picture of the plant to a Facebook group called Florida Botany asking if anyone had personal experience with the plant.  Before long, several members responded.

“I love these,” wrote a member based in the Florida panhandle.  “When we had them, they died back good in winter, allowing me to control their growth.”

Sharing her enthusiasm was a member based in the state’s central east coast.  “I had a volunteer show up in my mom and dad’s yard sometime ago and have not found it to be invasive at all.  In fact, I wish it would show up more, as I love it!”

Three hours later, the first negative comment arrived.  “My experience with I. Cocchinea is a little different,” wrote a Stetson University biology professor.  “I love them but have had them completely overgrow small trees.  One vine almost completely covered a dahoon holly.  Now that they are established, I get tons of seedlings every year.”

While the first two posts offered encouragement, the professor’s comment gave me pause.  His description of the vine’s aggressiveness mirrored my previous experiences with several other “found” species that I unwittingly introduced to the landscape.

Reading over these and other comments as well as doing more online research provided much to ponder.

On the plus side, the Florida Exotic Pest Plant Council does not consider Ipomoea cocchinea invasive.  And wildlife like it.  The vine’s small but bright colored flowers attract any number of butterflies, bees and hummingbirds.  Who wouldn’t want to add a natural hummingbird magnet to their yard?

On the negative side, it sounds like Ipomoea cocchinea will self-seed prolifically, popping up in unwanted spots like my husband’s vegetable garden.  Not a good thing.  Also, as my past experience with blue morning glory (Ipomoea indica) proved, once established it will be nearly impossible to eliminate.

While I stood by my computer weighing the pros and cons, a new comment popped up on Facebook.

“I’ve found them to be pretty aggressive,” wrote a Florida Botany member from Crawfordville.  “I sure wouldn’t put them in my garden but might allow them out by the roadside.”

His comment offered the kind of compromise that made sense to me.  Red morning glory vine, I think you found a new home.