After a few growing pains, fig trees are fruitful 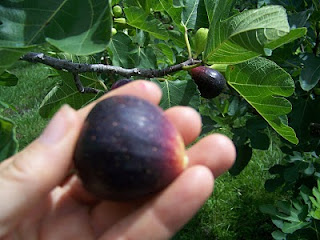 Simply Living
(First appeared in Orlando Sentinel July 11, 2010)
My husband is happy. Every day he walks out to check the fig trees and returns home with a bowlful of fruit. Like a child with a new toy, he likes to show off his treasure.
"Look how many figs I got today," he says after tracking me down to the laundry room, where I'm sorting through clean clothes and folding towels. "We're going to have a great harvest this year."
I'm happy for my husband. I like figs, but Ralph loves them. His passion for this member of the mulberry family of plants isn't new. He has been growing figs for more than 30 years, though his early attempts were not especially … fruitful.
In the 1970s and early '80s, we lived on Cape Cod, where fig trees grew but were susceptible to cold. To protect the plants in winter, he would partially uproot the trees and tip them over before blanketing them with a thick layer of mulch.
The theory behind all this effort was that the mulch would provide sufficient warmth to prevent the cold from damaging the plant.
In spring, when the weather warmed, he reversed the process. He removed the mulch, righted the plants and tamped down the earth. It worked, to an extent. The trees survived, but they never thrived. Despite all his pampering, I can't recall a single harvest.
Nonetheless, he continued trying.
When we moved to Florida, land of mild winters, Ralph went a little crazy. He bought several varieties of fig trees and planted them around the property. Unfortunately, Florida soil is susceptible to infestations of nematodes, microscopic roundworms that live in the soil and attack the roots of certain plants. Nematodes are a fig tree's nemesis.
Although nematodes didn't kill the trees, they severely limited fig production. Nematode-infested plants produce figs that drop off the tree before they're mature.
Unwilling to give up, Ralph sought out nematode-resistant cultivars. Somewhere along the line he chanced upon the LSU purple fig, a nematode-resistant variety developed by Ed O'Rourke, professor of horticulture at Louisiana State University. O'Rourke released the LSU purple fig in 1991. Ralph purchased some trees shortly after they came on the market, and he has been growing them ever since.
The LSU purple fig resembles the black mission fig in size and shape. It is a vigorous grower and prolific producer of sweet, medium-size fruit. Ralph has more than a dozen mature trees planted not far from the house. He can walk outside with a large plate or bowl and within minutes return to the kitchen with more fresh figs than any one person can possibly eat.
"Sixty figs," he announced last night. "That's how many I just picked."
"We're going to have to start drying them," I said as I surveyed the kitchen counter where plates full of ripening figs covered most available surfaces.
Last year, Ralph froze our extra figs. It turned out that figs freeze remarkably well. When thawed, they lose very little taste or quality of texture. This year, however, fresh-picked blueberries fill our freezer.
Unless I start making several pies each day (highly unlikely), there won't be room for too many bags of figs. We haven't experimented much with drying figs, but I expect we will soon begin.
Then again, our oldest son is due to arrive home in a few days and, like my husband, he has a passion for figs. Timmy has an uncanny ability to make food disappear, which might turn the "problem" of excess figs into a non-issue.
If you're going to have a problem, having too much of a good thing is a great problem to have.
Posted by sherry boas at 10:41 AM