Rain in Florida never loses its power to surprise 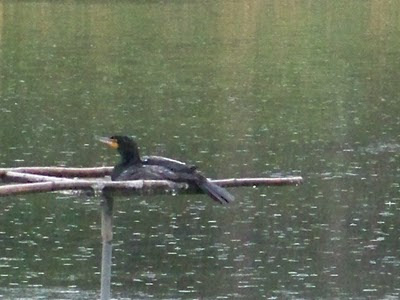 Simply Living
(First appeared in Orlando Sentinel July 19, 2010)
I like to watch rain. I like to sit on the porch, look out at the lake and watch raindrops make circles in the still water. I like listening to the tattoo of rain on a metal roof, and I'm especially fond of the way showers appear out of nowhere, only to disappear just as quickly.
The other day I experienced one of those sudden downpours in a most unusual way.
Ralph and I were taking a late-afternoon swim to cool off and relax. We were more than halfway across the lake, chatting amiably about the day's events and doing lazy breaststrokes through the still water. Ralph was midsentence when I interrupted him.
"Do you hear that?" I asked, somewhat anxiously. "I think it's about to rain on us."
No more than two minutes after Ralph turned his head to look where I was pointing, a wave of coolness swept over us. As the temperature dipped, the sky darkened and a noise not unlike the sound of oncoming traffic grew louder.
"It's either rain or a train heading our way," he replied.
Instinctively, we turned around and began swimming back home. The shore in front of our house seemed farther away than usual. As we increased the speed of our strokes, raindrops began to dot the water just south of where we were swimming.
"Here it comes," I said, pointing to the curtain of droplets quickly closing in on us.
Moments later, percussive pellets of water landed on our heads. The downpour had caught up with us.
"Good thing we're already wet," I said. "Otherwise, we'd be soaked."
Ralph smiled and looked my way. I could see that his glasses had begun to fog up. On the shore our towels were waiting, but by the time we reached the beach, I knew they'd be too wet to do us much good. We stopped talking and swam on. The noise of the falling rain would have made conversation impossible anyway.
Eventually we touched bottom, stood up and stepped out of the warm lake. Despite the rain, we'd been comfortable while swimming. But exposed to the air, our bodies felt chilled. We grabbed our wet towels and ran to the house.
Since I've been living in Florida, I've seen it rain on one side of a street and not on the other. I've watched dark walls of precipitation fall from distant clouds and rainbows appear after showers. I've driven through thunderstorms so intense that I had to pull over because my windshield wipers couldn't keep up. I've seen the dry soil soak up water like a sponge and large puddles evaporate in the summer sun. I've played in the rain with my children and bounced on the trampoline while rain splashed around us. But until recently, I had never experienced a rainstorm while swimming.
"I'm glad it was just a shower and not a thunderstorm," Ralph said, once we were back on land and toweled dry.
I couldn't have agreed more.
Posted by sherry boas at 3:33 PM