Snake's alive — somewhere in the office 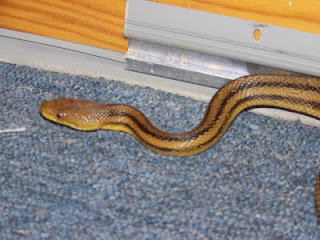 Simply Living
(First appeared in Orlando Sentinel September 14, 2009)
Many people don't like snakes, but I'm not one of them. I think snakes are beautiful, interesting and beneficial animals with skin that's surprisingly smooth and cool to the touch. But just because I like snakes doesn't mean I don't get startled if I come upon one unexpectedly — for instance, curled up on the hallway rug.
"Quick!" shouted my husband, "there's a snake in the house! It just went behind the bookshelf."
Sure enough, some sort of slithering being was indeed inside our house. I saw it with my own eyes even though I was, at the time, not wearing my glasses or, for that matter, much of anything else. In response to the seriousness of my husband's tone, I ran out of my office fast enough to see the snake retreat into an extremely narrow space behind a tall oak bookshelf.
"Open the door," Ralph commanded. "Let's try to scoot him outside."
This might be a good time to note that snakes that happen to wander into human habitats are not usually cooperative when said humans are trying to corral and catch them. The snake in our hallway reacted the way any self-protecting reptile might respond in a similar situation: It disappeared.
It's amazing how fast these creatures without feet can move. One minute it was calmly resting on the rug. The next minute it had wedged itself into a finger-wide slit between the wall and the bookshelf. Not that either of us was about to stick a finger into that slit. We were too smart for that; we used a stick instead. Unfortunately, the first stick we could put our hands on was too thick to fit far enough into the space to prod the snake out of hiding. All the stick probably did was frighten the poor thing more than two screaming humans already had done.
"Get a flashlight," Ralph directed, in the hope that illuminating the area would shed some light on what we should try next.
I ran into the kitchen and pulled open drawers. We had to have at least one working flashlight. By the time I returned to the hallway with a dimly lighted bulb, the snake had already removed itself from its hiding place and was heading toward the bedroom.
"Shut the door!" I heard myself scream. A snake in the hallway was one thing, but one in the bedroom was quite another. Ralph slammed the door in time to prevent the snake from entering our sleeping quarters, but in that particular part of the hallway there are two other doors, and both were still open. I closed the door to the bathroom but wasn't fast enough to shut the one to Ralph's office.
Some people have offices with smooth, uncluttered surfaces. My husband's office is not like that. His 9-by-12-foot nook looks more like a depository of recycled boxes and assorted electronic equipment than the efficient workroom it actually is. Floor-to-ceiling shelves line the walls with piles of paper on every surface. Add to that a labyrinth of cords and wires weaving their way over, under and around and you have what may appear — at least in the eyes of a pursued snake — to be a hiding-place bonanza.
Our hope of capturing the serpent vanished as we watched it slip effortlessly behind a stack of cardboard boxes. It might have been possible to empty out Ralph's office — dismantle the shelves, untwist the wires, move out the desks — but the thought of doing so was too overwhelming to consider.
Our decision was clear: We'd live with the snake.
It has been more than a week since the snake incident, and we have seen neither hide nor hair — I mean, skin or scale — of it. I assume it slithered out of the house the same way it slithered in — undetected. Snakes can fit through incredibly small spaces.
It's a good thing that Ralph and I like snakes. If we didn't, this whole snake-in-the-house incident could have resulted in a prolonged hotel stay, an expensive extermination fee or a series of costly visits to a therapist. Instead, it gave us yet another story of a close encounter with the animal world. As long as it doesn't decide to slither its way into the bedroom, I'm feeling good.
Posted by sherry boas at 5:04 AM