So, how many things are you doing now? 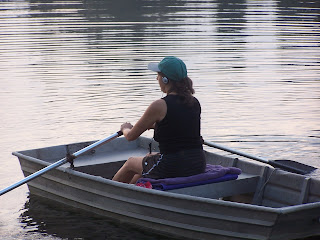 (First appeared in the Orlando Sentinel June 3, 2007)
My ability to multitask is deteriorating rapidly.
There was a time in the not-too-distant past when I'd think nothing of juggling several activities at once. I was pretty good at it too. My mind could flip from one focus to another with barely a blip on my mental radar.
Not anymore.These days, doing two things at once seems to be my limit. If I try to take on more than that, I become completely unstrung.
Like a recent morning. After dropping off my son at school, I drove on to do errands. First stop -- the bank.
As usual, I pulled up to the drive-through window, leaning against the car's steering wheel to fill out a deposit ticket. But this time, just as I was putting pen to paper, the cell phone rang.
Simultaneously, the teller's melodious voice resonated through the intercom, "Welcome to Wachovia. How may I help you?"
Ah, the answers I could have given her.
What should I do? The phone beckoned. The teller waited. The deposit ticket was still unwritten. And another car had just pulled in behind me.
Without so much as a courteous reply to the patient teller, I jerked the car out of neutral, maneuvered into a parking space and answered the phone call. When that business was complete, I stepped out of the car and went into the bank. No way was I going to attempt the drive-through again.
Inside, the bank employee laughed at my predicament. I'm not the first customer she had seen deal with a multitasking dilemma at the drive-through window, and I doubt I'll be the last.
We live in an era when the ability to handle many chores at once is not just the norm, it's an essential part of modern life. Hardly any of our activities aren't piggybacked on something else.
Consider my typical day.
I get up in the morning and go for a row. Still in wake-up mode, I paddle along methodically as I wait for my mind to lose its sleepy fuzziness. Although my arms are rowing, my ears are tuned to Morning Edition on FM radio. During breakfast, double duty continues as I read the newspaper while crunching my cereal. While driving, I'm serenaded by my favorite musicians on compact discs.
I listen to the radio again while making meals, or sometimes tune into a television program while chopping vegetables. If I walk on the treadmill, a DVD goes into the player. I even fall asleep with the TV on. One of the only times I'm not doing two things at once is when I'm writing, and that's only because I'm of a certain age. My kids think nothing of doing serious work while listening to music or watching a YouTube video on the computer.
The older you get, the less able your body is to function normally. That's a given.
Maybe my dwindling ability to focus on several things at once is just another sign of aging. As the years go by, eyesight wanes, hearing diminishes, bones become brittle, body parts sag and the ability to effortlessly juggle simultaneous tasks falls by the wayside.
If that's how it is, I doubt if this new disability will be much of a hardship. In fact, becoming monotasked in a multitasked world could be empowering. How liberating to fill the day with fewer expectations of accomplishment. What a relief to stay focused on one thing at a time instead of navigating the increasingly murky waters of two, three or four chores at once.
For now, all I can do is recognize the symptoms of MTD (multitask degeneration) and react accordingly. Unless I want to endanger lives while I'm driving, if the phone rings, I know I must pull over to talk. If I'm preparing supper, it's best not to get sidetracked checking my e-mail -- at least not if I want unburned food. And when I'm running errands, I should approach the bank's drive-through window fully prepared. If that means deposit slip filled out beforehand and cell-phone ringer switched off, so be it.
Bottom line: When it comes to multitasking, at some point in life, less is decidedly more.
Posted by sherry boas at 8:27 AM