I found the right thing, and it works 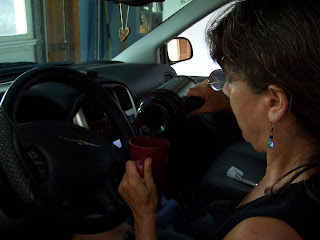 It's so satisfying to buy something that actually works.

My husband and I just returned from a weeklong visit to New England, and one of my pre-trip purchases -- a stainless steel Thermos -- not only met but exceeded my expectations.

This inexpensive item kept me in hot tea for hours on end -- an essential element when you're trying to cover 1,500 miles in marathon stretches.

My $12 Thermos is easy to use, large enough to hold several servings of my favorite beverage without being cumbersome or unwieldy, and a cinch to clean.

Those are important features when you need to replenish your caffeine fix while zipping along an interstate, something I found myself doing many times during this recent East Coast excursion.

Despite heavy advertising, wide variety and a multitude of marketplaces, it's not always easy to find the right product to meet your needs.

I purchased and returned two other containers before settling on my current beverage holder. The latch on the first was difficult to undo, and the second turned out to be designed for hands far larger than mine.

Unfortunately, not all unsatisfactory purchases are so easily refunded.

In 2000, I bought a new Plymouth Voyager van in Orlando. I knew I had made a mistake before leaving the dealership. While I sat in the driver's seat, the blinker indicating an imminent turn out of the parking lot, I glanced down at the completely smooth driver's side door panel. Something was missing. Storage pockets.

In my world, front-door storage pockets are as essential as cup holders. A car can never have enough places to stash the necessary accoutrements of modern mobility.

Door pockets hold my maps, a bag filled with plastic utensils, a box of Band-Aids, anti-bacterial hand cleaner, a Soduko puzzle book and any other supplies deemed indispensable for my daily treks about town.

How a car manufacturer can "forget" to include door pockets in a $25,000 van designed for family outings borders on scandalous behavior.

Almost as outrageous was my own inattentiveness in buying a vehicle with such an obvious omission.

A car without storage pockets may seem like a minor flaw, but it's the small details that create large irritations. In the five years I owned that van, I doubt if a day went by when I didn't wish I'd been more observant before signing on the dotted line.

Just last year I made another large purchase that failed to meet all my expectations.

Lured by the marketing gurus to think my life would be better with a flat-screen HD LCD TV, I plunged headfirst into a sea of online data about multimedia options. Several days later, saturated with newfound knowledge, I felt ready to slide my credit card through the scanner at my local big-box store.

Less than two weeks after my swim through the sea of digitized television data began, our outdated viewing room was transformed into a stylish mecca of media. The old square TV set was demoted to the bedroom, replaced by a chic rectangular component that looks more like a piece of artwork than a utilitarian electronic device. While the new television has many features decidedly better than its more portly cousin, the convex model wins out if we want to watch a TV show or movie taped on a VCR. (Remember VCRs?)

For some unknown reason, the HD LCD TV designers didn't think we would have any reason to see the picture while the tape was being rewound or fast-forwarded. Instead of permitting a speeding image to appear as it did on our old TV, the picture on the new set is replaced by a blank screen and whirring noise whenever the rewind or fast forward button is pressed.

This makes it extremely difficult to know when to stop if, for instance, you're trying to avoid watching a commercial and focus only on the show. That design characteristic may satisfy advertisers, but it's a no-go for consumers like me. One small design flaw has rendered an entire closet full of VCR tapes relatively useless in our main viewing room.

I suppose we all find ourselves from time to time on the receiving end of poorly thought-out products. At some point, each of us succumbs to advertisers' claims that their merchandise is the newest/best/sexiest/most desirable product ever created and life would be so much better if we bought it. Right now!

Maybe so. Then again, maybe not.

Newer is not always better, any more than pretty always outperforms practical.

The ideal is when both parts come together in one updated, well-designed, highly functional, attractive product.

That's how it is for my new Thermos, which, four hours after being filled with an aromatic stevia-sweetened brew of PG Tips, remains delightfully steamy and fragrant.