BYOB - Bring your own boxes to save oil, trees 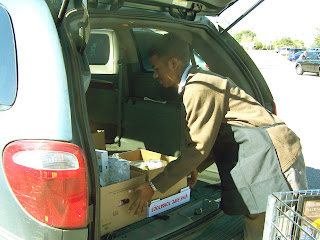 
The people who work in my local Publix probably know me as that odd person who answers “neither” when asked at the checkout if I prefer paper or plastic bags.

For the past couple years I’ve been doing my small part to help the environment by taking my groceries home in a box. Using a cardboard box to tote groceries is such a sensible choice; I don’t understand why more people don’t do the same. Boxes are sturdy, durable, and easy to pack and unpack. In the store, the right size box easily fits into a shopping cart and in my car it keeps my groceries from crushing or falling over as I drive.

I’ve been using the same two boxes for at least six months and neither shows any signs of wear. Of course, opting for boxes versus plastic or paper bags caused me to become something of a box connoisseur. Whenever I pass a stack of cardboard containers, my eyes always scan them for size, shape and durability.

My favorite choice for those quick trips to just pick up a few items is a recycled tomato box. If you ask the folks at your local vegetable stand, they’re usually glad to give away empty boxes – after all, it saves the store owner from having to break the boxes down and pay the trash people to take them away.

A tomato box is approximately 11 inches wide by 15 inches long and 9 inches deep with built-in handles on the two short sides. Empty it weighs about 8 ounces and is light enough – even when packed with bottles, cans and produce – for a person of small stature to carry with ease.

For longer shopping forays, the cardboard container I like best is a retired banana box. Though banana boxes are bigger than tomato cartons, they also have handles built into their sides for ease of lifting. A banana box fits neatly into a shopping cart enabling me, as I tool around the store, to stack my groceries right into the box. Although heavier to carry when full, a banana box can still be lifted out of the cart when it’s time to head home, especially if you take advantage of the bagging person’s offer of help.

Stored in a car’s trunk or, as I do, in the back of my van, a box takes up little space. Even when a stop at the supermarket is not on my to-do list, having the boxes in the van comes in handy to keep all the items I’m always carrying – library books, snacks, a clipboard, etc. – from scattering all over the floor during trips around town.

One day I brought my box into Publix, did my shopping and proceeded to the checkout counter where a new cashier, who happened to be a native of Ireland, helped me.

“This is the way it’s done in Ireland,” she said after realizing I’d brought along my own tote. “Where I’m from, everyone brings their own bags to the store.”

In 2002, the Irish government introduced a levy called PlasTax. After the tax was installed, each consumer buying items at retail stores was taxed 15 cents for each bag they used. Of course, shoppers where free to bring their own bags with them and not pay the tax and that’s what the majority of shoppers did. In the first year alone, the BBC news reported that public consumption of plastic bags decreased by 90 percent.

Convert that to energy and it means a yearly savings of approximately 430,000 barrels of oil and thousands of pounds less greenhouse gas emitted into the atmosphere simply by switching from plastic bags to alternative methods of toting home groceries. If American shoppers, who use more than 50 times the amount of plastic bags than Irish shoppers do, were to adopt similar changes, we could save at least 300 million barrels of oil per year. Imagine what an impact that could make in the reduction of greenhouse gas emissions.

We’d also be saving wildlife. According to Sierra Club research, hundreds of thousands of sea turtles, dolphins and whales die each year when they mistake plastic bags for food. The same thing happens to cows, goats and other foraging land animals. Finding alternatives becomes even more important when you consider that according to the U.S. Environmental Protection Agency, plastic bags can take up to 1,000 years to break down.

If you think paper is a better option, think again. It takes four times the energy to manufacture paper bags than it does plastic. In 1999, the American Forest and Paper Association reported that Americans used 10 billion paper grocery bags. To produce that many sacks, 14 million trees had to be cut down.

Ireland is not the only country solving problems caused by paper and plastic grocery bag usage. Single-use plastic bags are banned in Taiwan, Bangladesh, Kenya, and in parts of India and Hong Kong. Denmark combats the problem by taxing the retailer instead of the consumer and, several other countries, including the UK, Scotland, South Africa, Switzerland, Vietnam, Australia and China already have, or are in the process of initiating a similar tax on plastic shopping bag usage.

I didn’t know these facts when I started using a box instead of bags. I simply liked the ease a box provided and appreciated not having so many plastic bags to deal with at home. I may be that odd person at the checkout lane carrying her groceries in a cardboard box, but I’m also the one walking to my car with a smile on my face knowing that the little thing I’m doing is making a difference to the world in a mighty big way.
Posted by sherry boas at 8:10 AM