We were recently away for a few days. When we got back, I did my usual slow stroll around the gardens. I was pleased to see how well my flowering plants fared in our absence. The only plant in need of water was a container of porterweed.

After giving it a good drink, I poured the remainder of the not-quite-empty watering can into a begonia on a plant shelf next to the house.

Surprise! There was something moving in the begonia pot! A rat – yes, a rat – was in the container and it didn’t look pleased to have water poured on its back.

Okay. I’m a country girl. I’m used to critters of all kind. That doesn’t mean I have to like each and every one. I accept rats as part of nature. As long as they live outside and don’t gnaw through any wires or walls, I can accept their presence. But they don’t belong next to the house living – or at least resting comfortably – inside a potted plant in my garden.

What did I do? Well, I didn’t scream. I give myself credit for that. I did back away and call for help.

“Ralph!” I shouted for my husband. “Come see what’s living in my potted begonia.”

“What is it?” he asked before he even got there.

“It’s a rat,” I said, too excited to wait any longer. “See its tail hanging over the outside of the container?”

He did. The rat’s naked pink tail was a good seven inches long. He also saw its body - a large body (this was no cute little mousey) about the size of a squirrel, minus the fluffy tail.

“Do you want me to get rid of it?” he asked as he reached for a stick and as I backed farther and farther away.

Before I had a chance to answer (what could I say except an emphatic YES!?) he poked the rat with the stick.

Whoosh! It ran. And where did it run? Out of the pot, down the plant stand, across the walkway and directly toward where I was standing.

Once again, I was proud of myself for not screaming. It all happened so fast. I simply stood there watching as the rat ran toward my bare feet until it abruptly changed course, veering off into the foliage.

That was good. It was gone. That was bad. It was living somewhere very close to our house. And it probably wasn’t living alone. Like all rodents, rats are prolific breeders. There’s never just one.

So I have a problem. A rat problem. What should I do? I considered my options.

A) I could get a cat. An outdoor cat might solve the rodent problem but it would also kill birds, anoles and frogs. Plus, an outside cat would itself be vulnerable to predators. Been there. Done that. Really don’t want to do it again.

B) I could put down poison. Poison would be an effective control. It works. But it works on other animals too. Animals I don’t want to kill might also eat the poison as might predators that prey upon rats. I don’t really want to use poison unless I absolutely have to.

C) I could cut back plants and clean up the area around the house so there are fewer hiding places for unwanted critters. I’m not sure that will solve the problem but it’s worth doing anyway.

D) I could do nothing and wait to see what happens.

A few days have gone by and I haven’t seen any rats. That doesn’t mean they’re gone, but it is a comfort. 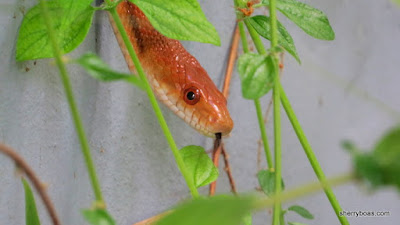 As my husband entered the room, the snake – a yellow rat snake – slithered over the windowpane and down into the garden. 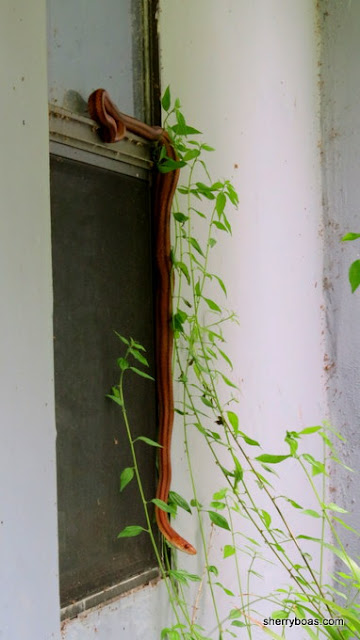 “Do you think it’s after the rat?” Ralph asked.

Option E) Control the rat population with natural predators. Snakes, owls, hawks and coyotes are among the many animals that hunt rodents. If the rat snake didn’t find our begonia-loving rat, maybe one of the other predators will. This country girl has hope.