Sex in the garden

Love is in the air, and butterflies know it.

Yesterday, while standing by the bottlebrush tree, I watched a pair of Gulf fritillaries engage in Lepidoptera foreplay.

The female chose a bottlebrush leaf, lit upon it and held on tight. While she stayed still, her male counterpart landed on her back and flapped his wings furiously. A few seconds later, the pair parted only to reunite a after the female resettled on a different leaf. As I watched, the couple repeated their pre-mating ritual several more times.

I might have continued watching the fritillaries amorous activities longer if the sight of two other butterflies had not distracted me. Another romantic rendezvous was taking place.

Eastern black swallowtails are almost twice as big as Gulf fritillaries. With large black wings edged by a series of bright yellow spots and highlighted in the center of the lower wings by two orange “eyes” and several blue dots, they are stunning to behold. I suppose the swallowtails found each other stunning as well — they participated in an airborne lovefest.

Eastern black swallowtails are one of many species that woo potential partners by performing aerial acrobatics. While I stood quietly by, the two butterflies fluttered up, down and all around the bottlebrush tree. They flew together in a closely choreographed dance. Not only did I find the prelude to butterfly procreation interesting to observe, it was beautiful to watch.

Beautiful though it be, a butterfly’s life is brief. After emerging from the chrysalis, most live less than a month, and some species last only a few days. During that short time, they must accomplish two tasks — find food and mate. To help with the latter, both sexes exude scent secretions called pheromones from pockets on their wing patches. Male butterflies patrol the air in search of females or perch patiently on a twig, leaf or flower until a member of the opposite sex passes by. Either way, once the male senses or sees a female, he puts on a show to prove his worthiness as a reproductive partner.

One day last year, I encountered a tangle of four monarch butterflies hooked together in what looked like a butterfly bouquet. With wings flapping, the orange-black-and-white beauties fluttered a few feet above our front walkway before eventually settling down together on the concrete path. 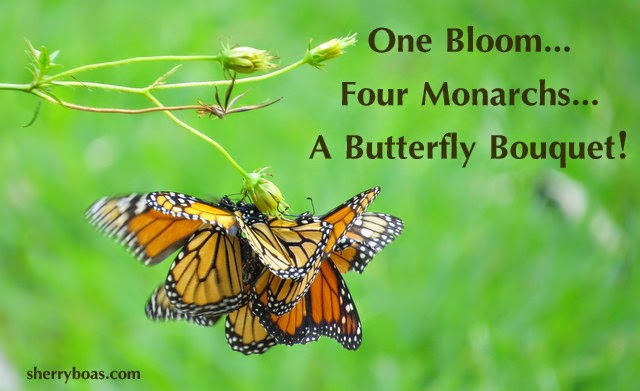 Until that day, I had never seen such an entanglement of butterfly bodies. I later learned that males of some species exhibit this type of behavior to attract the attention of a nearby female who then chooses one of the participants as her mate. I don’t know if the monarchs I watched last year were successful at attracting a partner but I do know they put on an impressive show.

Butterflies mate only during warm times of the year. Because they are coldblooded, they depend on warm weather to regulate their body temperature. When it is either too cold or too hot outside — below 50 degrees or above 108 degrees — butterflies are unable to fly. Lately, it has been perfect weather. A butterfly’s search for food typically is met by a ready supply of nectar from flowering plants, leaving only the drive to find a partner and mate.

Reproduction is a basic need of every species, humans included. I find it odd that many people spend more time watching acts of violence than displays of affection. We could all do with more examples of amorous attention. There’s reason to care when love is in the air.
Posted by sherry boas at 6:04 PM