Mulberries are ripe, but where are the cedar waxwings? 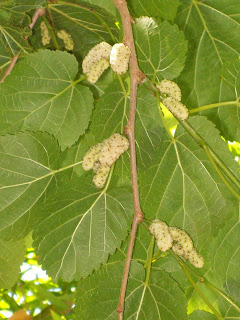 Bountiful. That's how our mulberry crop is this year.

The dozen or so mulberry trees on our property are heavy with fruit. So many berries cling to the branches that the boughs bend with their weight. It's remarkable.

What's also remarkable is that the birds aren't eating them. By this time in previous years, flocks of cedar waxwings would have descended to devour the fruit. Waxwings are voracious feeders who send scouts out early in the season to secure feasting spots for the birds back home. With an uncanny ability to predict precisely when fruit is edible, migrating flocks of birds arrive just in time to wipe out whatever mulberries are ready to pick.

That has been their pattern for the past six or seven years. I don't like it, but I accept it as part of nature's cycle.

Not this year, though. This year things are different.

I'm thrilled with the abundant harvest, but I'm also concerned. A radio story I heard March 21 keeps running through my mind. In the broadcast, National Public Radio reporter Noah Adams interviewed Kirsten de Beurs, one of several scientists who have studied satellite images of foliage changes from 1982 to 2006. Their studies have shown that spring is occurring an average of eight hours earlier each year.

While an eight-hour difference might seem inconsequential, the accumulation of hours during the course of many years is anything but. In 26 years, those eight hours translate into 208 hours, or just under nine full days.

What does that mean? It means birds such as the cedar waxwings that usually eat our mulberries have to continually reset their internal time clocks to mesh with unanticipated seasonal fluctuations.

"We see the vegetation start to occur earlier, and the animals have to adjust their timing as well, and that's not always easy to do," de Beurs told Adams.

"They cannot necessarily adjust at the same speed that the vegetation is occurring."

A lack of precision timing can have reverberating effects. If birds miscalculate when food sources are available, they might not be able to adequately provide for their offspring. Nesting time might be delayed, causing an entire generation to suffer.

Although I'm neither a fatalist nor a pessimist, I have only to look toward our abundant mulberry trees to know something is amiss. The possibility that climate change has had an impact on the patterns of migrating birds is right outside our front door. Why else are our fruit trees so untouched by avian beaks? Would the birds really decide to cross us off their annual fly-by route on a year when our harvest is amazing? I don't think so.

But maybe I'm wrong. Perhaps our mulberries are the exception rather than the rule. Maybe waxwings are eating their fill of other fruiting plants instead.

To find out, I contacted a professional. Karen Brothers has been managing a 36-acre commercial blueberry operation in Tavares with her husband, Jerry, for 22 years. Blueberries ripen about the same time as mulberries, and farmers such as the Brotherses wage an annual war against avian intruders that descend en masse to devour their crops. I reached Karen Brothers by phone.

"This is the first year they've skipped us," Brothers reported. "We've spoken to other blueberry growers too, and although some cedar waxwings have been spotted, they don't seem to be arriving in droves like they have in the past."

Brothers also reported that, like our mulberries, the blueberry crop this year is exceptional. "We've never had a year like it," she said.

Is that because the birds haven't come to eat their share of the fruit or simply because conditions were right this year for a robust harvest? I don't know.

What I do know is that the lack of winged creatures makes me anxious. Their presence -- or in this case, the lack thereof -- is one of the more obvious signs that something is amiss in our oh-so-precariously balanced web of life.

You might think I'm talking nonsense. So what if a few birds don't arrive to eat some berries? Who cares about birds and mulberries anyway?

I do, and I hope others do too.

Although we human residents of Planet Earth prize independence, the reality is none of us acts alone. As scientists such as de Beurs discovered, climate changes are already affecting vegetative growth, which in turn, affects insect and animal patterns. Farmers might be relieved to have one less pest to contend with in any given year, but this season's change in bird migration patterns provides an eerie peek into the future.

What kind of world do we want to live in?

I, for one, would like it to be one populated by as many different kinds of creatures as possible. Do I want our mulberries devoured by droves of waxwings? No. But neither do I want birds to disappear.

Nature's bounty is meant to be shared. Not only that, we all must care and do our part -- however small or seemingly inconsequential -- to decrease our carbon footprint. The future of all life lies in human hands.

I treasure this year's bountiful harvest, but I treasure more a planet that can produce sustainable harvests for countless years to come.
Posted by sherry boas at 12:42 PM