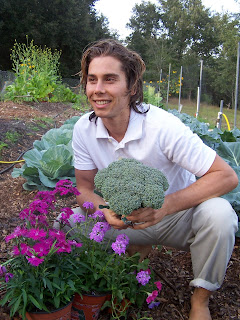 If there's a gene for gardening, my oldest son inherited it.
Like his father and grandmother before him, my third child is a born gardener. Whatever he plants, grows.
No, that's not entirely accurate. Plants under his care don't merely grow -- they flourish. You would agree if you saw the broccoli he started from seed a few months ago. I never saw such large heads. They were the Arnold Schwarzeneggers of broccoli. Broccoli on steroids, except organically grown.
Some people are good with plants. They have that proverbial green thumb. That's Timothy.
Last winter, my 24-year-old son took a large swath of dry ground between our two houses and transformed it into a lush garden.
I lost track of how many loads of manure, peat and compost he added, but his efforts turned the pale, sandy ground into rich, dark loam. When he finished augmenting the soil, he fenced in the area and set about planting vegetables, flowers and fruit trees.
His garden overflowed with more than produce. It was filled with whimsy.
In one corner was his "bed & bath room." A cheery stand of gerbera daisies popped out of an old dirt-filled bathtub balanced atop a white kid-size bed frame.
A few feet away, an unwanted sink found new life as a planter for sweet-smelling dianthus. Flowers emerged from old shoes and worn tires and, of course, from the ground itself.
I loved the garden's haphazard design. Surprises were everywhere.
What didn't surprise me was how well things grew. Timmy has demonstrated a passion for plants since he was old enough to toddle outside and smell the roses. In fact, roses were his first love.
Scattered around the property today are about a dozen stands of red knockout roses derived from a single cutting he made 15 years ago. On one of our long-ago treks around town, we spotted a beautiful plant in someone's yard. After asking permission to take a snip home, Timmy rooted his find. Of course, it thrived.
Creating many more "babies" from that first rose remains one of Timmy's ongoing gardening projects. Lately, though, he has a new campaign: integrating vegetables into beds usually reserved for ornamentals.
Like many homes, ours is surrounded by foundation plantings. Pentas, bush daisies, milkweed, impatiens, porterweed, snake plant, ginger, various sages, caladiums and bluebells are among the plantings.
Lately, Timmy has been easing edibles in between the perennials and replacing some of the more work-intensive plants entirely with vegetables and herbs.
Parsley has been one of his most successful additions. Outside the front door, the curly-leafed herb acts as an attractive edging to the flowerbed. With its broad shape and bright green color, parsley holds its own against typical foundation plants such as liriope, mondo grass or society garlic. But unlike the others, it can be eaten.
When I'm outside, I'll sometimes break off a stem and chew on this under-appreciated herb. It's so much more than a garnish.
My favorite use for parsley is in hummus, a Middle Eastern spread made of garbanzo beans, lemon juice, garlic, sesame tahini -- a peanut butter-like paste made of sesame seeds -- and lots of parsley. My husband, Ralph, loves to dip rice crackers or baby carrots in freshly made hummus.
Every couple weeks I cut off huge clumps of this rich source of antioxidants and chop it into small pieces before adding it to the blender with the other ingredients. Ralph insists it is the fresh parsley that makes our hummus special.
Broccoli is another edible Timmy has successfully integrated into the flowerbeds.
With its pretty florets and large leaves, broccoli shares many characteristics with ornamental plants. It's quite the looker planted among the bluebells and alongside the snake plants.
Many people -- former President George H.W. Bush among them -- have nothing good to say about broccoli. They turn up their noses at this highly nutritious food. That's too bad, because the veggie they snub is a storehouse of goodness. One medium stalk provides 200 percent of the U.S. recommended daily allowance for Vitamin C. It's cholesterol-free and low in fat, calories and sodium but high in fiber and Vitamin A.
Maybe our nation's 41st leader never had the pleasure of eating well-prepared, freshly picked broccoli. It's an entirely different creature than the overcooked, limp, khaki-green offerings served in most restaurants.
Light steaming is our preferred cooking method. Broccoli is also good stir-fried with garlic and olive oil or as an addition to roasted vegetables. It is even yummy raw, dipped in something such as, well, hummus.
Timmy has me hooked on his latest gardening endeavor. I love the idea of intermingling flowers with edibles and especially appreciate the convenience of having meal ingredients just a few steps away from the kitchen. If you're looking for a way to jazz up your garden, you might consider sneaking some of your favorite veggies into the flowerbeds. The result might be downright delicious.
Posted by sherry boas at 5:08 AM