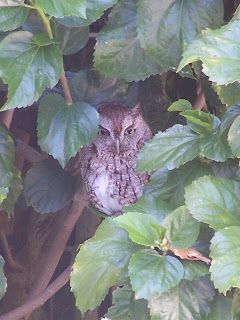 Last year, the city replaced all the mailboxes along a nearby highway.
For weeks I watched as the former letter receptacles -- some timeworn and battered, others fairly presentable -- lay in piles along the roadside. Nobody wanted them.
The homeowners had shiny new boxes, courtesy of the city, and seemed ready to relinquish their old ones to the landfill.
Unable to bear such waste, I drove out one day in the truck, gathered up a few and took them home. Despite their rusty hinges, dented sides and broken flags, I knew I'd find a use for them somewhere around our property.

A few months ago, I did.

Using sheet-rock screws and a cordless screwdriver, I mounted two of the mailboxes several feet apart underneath the wide eaves of our front porch. My hope was that the letter holders, with doors ajar, would make acceptable nesting boxes for some of the many birds that frequent our yard.

The first feathery creatures to investigate the mailboxes were a pair of Carolina wrens. Chatty biddies that they are, the wrens caught my attention one morning as I was enjoying my first cup of tea.

Throughout the day, I watched as the tiny bug-catchers busied themselves carrying bits of grass, fallen bamboo leaves and other litter into the mailbox. By the time evening arrived, the wrens had constructed a cozy nest tucked against the back of the box.

During the next few weeks, I watched as other birds checked out the remaining mailbox.

Doves came and peeked inside but, for whatever reason, decided against establishing a nest there. Maybe they harbored hopes of returning to our garage where they had raised two broods last summer.
Doves may be lazy nest-builders, but they have an eye for comfort. They must have decided that building a nest of twigs on top of our garage door opener -- last summer we often left the garage doors open for ventilation -- would be a secure spot to raise their young.
And it was.

All summer the doves stayed safe and dry on their mechanical platform, but their twiggy home proved inconvenient to us car-driving humans.
If we drove inside the garage and attempted to close the overhead doors, moving chains would destroy the nest. To avoid that, we left the garage doors up. The car frequently stayed outside in the hot sun -- a poor choice but better than parking inside beneath a family of none-too-tidy doves.
Open garage doors became open invitations to all sorts of critters, including mud-dauber wasps, stinging insects that prefer raising their young in protected spots in or around houses.
Determined not to repeat last year's mistake, my husband and I vowed this year to keep the garage doors closed.
So far, our diligence has paid off. Mud daubers have set up residence elsewhere, and no new dove nests have been constructed inside the garage. I hoped the doves would choose one of the mailboxes instead.
They didn't, but another bird did.

My son was the first to notice the new residents.
Early one evening while on the porch working on his laptop, Timmy heard a familiar sound.
Finding me in my office, he said, "Come onto the porch. I think there's an owl in the mailbox."
As soon as I entered the screened room, I agreed. Screech owls have a most distinctive cry. Some people consider it a plaintive wail, an unsettling, eerie sound. I think their tremulous whistle sounds more like the whinny of a tiny horse.
Remember the children's toy called My Little Pony? Imagine if that toy horse could whinny. That's what I think of each time I hear a screech owl cry.
Our family is familiar with screech owls because last summer -- the same season that the doves nested in the garage -- a pair of these 9-inch-tall owls set up housekeeping in a homemade papaya picker. My husband made the papaya picker out of a three-gallon black plastic pot attached to an 8-foot length of bamboo.
When not being used to snare fruit from atop leggy papaya trees, the picker rested against the porch wall. It barely fit under the overhanging eave and was often left unused for several days.
Screech owls must have liked the look of that papaya picker, because they soon claimed it for themselves. After pecking out a round hole in the side of the plastic pot, they raised their family in the bottom. All summer long, we climbed a ladder instead of using the picker to gather papayas.
Now the owls were back, nestled contentedly in the mailbox.
It has been about two weeks since Timmy discovered our newest residents, and I still thrill each night when the mama bird sings her trembling evening tune.
Every now and then, I catch a glimpse of the father owl swooping into the mailbox to take his turn sitting on the eggs, which take about 26 days to hatch. The other day I spied him in the daytime resting on the lower branch of a nearby hibiscus.
I'm glad I saved those mailboxes from being crushed or buried at the county dump. Like many dated items, they still had a lot of life left in them -- too old to look good but too good to be thrown away.
While some of the mailboxes may no longer be useful receptacles for incoming letters, at least one is still providing a most important service -- it's about to receive a special delivery any day now.
Posted by sherry boas at 4:02 AM