My husband Ralph recently came in from the garden, eager to show me what he’d just harvested.

“Can you use some potatoes for supper?” he said as he extended a bucket full of yellow and red-skinned spuds in assorted sizes, including one large potato shaped like a heart. 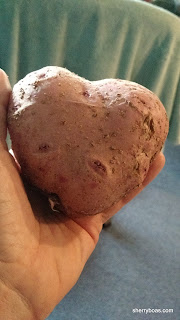 Excited by his bounty, I quickly replied, “Absolutely! Pick me some chives and parsley and I’ll made some mashed potatoes tonight.”

Dinner was delicious, especially because so much of it came from the garden. In addition to the potatoes, our meal included homegrown tomatoes, hot peppers, bok choy, broccoli and assorted lettuces. It’s summertime, and though the heat takes a toll, there’s still plenty of food for the picking.

Picking is easier than it used to be. Ralph’s back is less stressed ever since he abandoned conventional in-ground gardening several years ago and switched to above-ground growing of vegetables in containers. They sit on long platforms a few feet off the ground so he no longer needs to bend over when weeding or picking. Raised containers have also eliminated damage by critters such as armadillos and rabbits that used to bother our plants when they were in the ground. 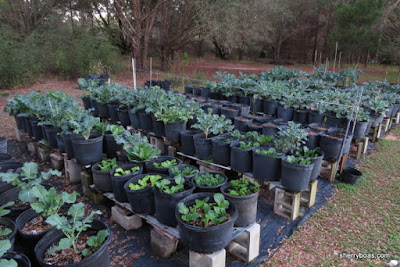 When it comes to potatoes, container-grown plants have another advantage. During the years when Ralph grew potatoes in the ground, we used to have to use a shovel or pitchfork to dig up our harvest. Inevitably, some of the bounty would be stabbed with the pitchfork or cut in half by the shovel. With container-grown spuds, no potatoes are ever damaged. When it’s time to harvest, Ralph simply dumps the full container into an empty one while picking out any yellow or red-skinned tubers he sees. 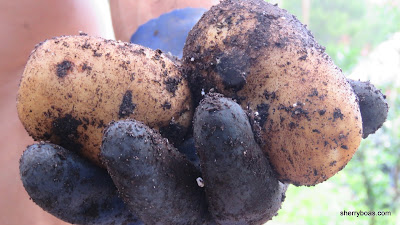 The main type of containers he uses are 10-gallon squat pots, which have an equivalent diameter to 15-gallon landscape pots but are less tall. He also is experimenting with growing them in seven-gallon pots. All the containers are the lightweight, inexpensive type used in nurseries. They’re not fancy, but they’re functional and easily available.

He begins with a spud that has sprouted. His first planting came from bags of potatoes I had purchased from Publix and Whole Foods Market. With only the two of us in the house these days, a five-pound bag of potatoes takes a while to consume. Often, one or more spuds winds up sprouting little eyes before I get around to cook with them. Rather than cutting out the eyes, I give them to my husband who, in turn, cuts them into pieces and plants them in his garden.

“Two or three cut up pieces seems to work well in a 10-gallon squat pot,” he explained. “I fill the pot about half full with my soil mixture, then put in the cut-up pieces of potato and lightly cover them with more soil.”

As the potato plants grow, Ralph weeds around them and adds more dirt until eventually the soil level is just short of the top of the pot. As the plants mature, he also supports top growth with bamboo sticks to prevent them from falling over.

The soil mixture my husband uses is a combination of compost, peat, woodchips and perlite, but any potting soil would work. The potatoes are already eager to grow. After all, they are sprouting in the fridge. The main thing is to take them out of the cooler, cut them into chunks with sprouted eyes and put them into soil. Nature will take it from there.

The fun begins about two months after planting. By then, top growth leaves will have started to turn yellow, look a bit spotty and spent. Dump the spud-filled container into either an empty container or onto a flat surface and pick through it to find your treasure. Gather up the bounty and rinse off with a hose before bringing inside. Freshly harvested potatoes store best when allowed to cure for a week or two in a dry, dark place. We put ours in the pantry covered by a cotton cloth before refrigerating.

But don’t store them all! Cook some for supper. Mashed, boiled, baked, roasted, grated, grilled or fried. No matter how you cook them, homegrown container-raised potatoes are spud-tacular plants to grow.
Posted by sherry boas at 4:13 AM