My antidote to the daily news

This week at the beach has been the perfect mix of productivity and playfulness. In addition to getting much weeding, clearing and planting done at our property, meeting with workmen and dealing with design changes, Ralph and I managed to get ourselves up and on our bikes everyday but one and this morning, when Ralph needed a little extra sleep-in time so I went out alone.

I don't mind solo rides. As much as I enjoy our rides together, there's a special pleasure in being on my own.  This morning, instead of biking along the beach from 27th Ave. to Hiles as we usually do, I took Saxon south. It was early.  No cars at all.  It only took about 10 minutes to bike to the beach. By then, the sun was just beginning to peek over the horizon but low-lying clouds blocked it from view. I decided to take a right and bike south. It was dead low tide. Perfect for beachside cycling.


There was little wind to keep sand fleas away. They didn't bother me when I was moving but when I stopped to take pictures the tiny bugs became annoying.


A quick dip in the surf solved the sand flea problem. Not only was the water delicious but by the time I came out, the sun had risen above the cloud cover.


The rising sun wasn't all I saw as I biked north along the shoreline.  Part way back to 27th Ave., I came upon a cool crab.


My knowledge of crustaceans is limited but expanding. The more time we spend at NSB, the more fun I have learning about unfamiliar critters and plants, including many different kinds of crabs. The one I saw this morning didn't look at all like the ghost crabs I usually see on the beach.


A little farther along, I stopped for a second swim then pedalled until I came upon a fellow who had just caught a fish.  He seemed so proud of his catch even though the fish was quite tiny indeed.


A few minutes before arriving at 27th Ave., the shell of a small horseshoe crab caught my eye so I picked it up and took a couple shots before returning it to the waves. 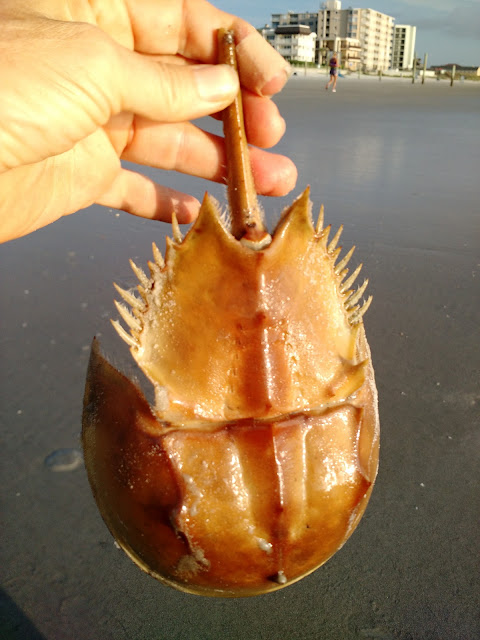 Below is a video I made late last summer when Ralph and I watched a much large, LIVE horseshoe crab make its way back to the ocean through the shallow water.


Today's adventure was different than usual in that I was biking alone, but it was the same as always by being so rich in discoveries.  No matter what weather, time of day, season or tide, when I'm at the beach something - usually many somethings - catches my eye. Being at the beach in the early morning is a great way to start the day!