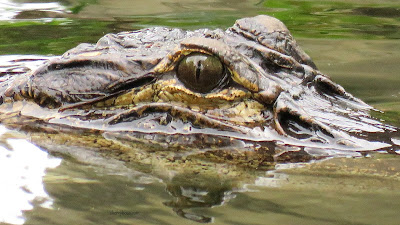 Every year just before the summer solstice, a young alligator appears in our lake.  If it happened only now and then, I'd consider it an anomaly, but instead, time has proven the appearance of a sub-adult alligator to be a normal seasonal event.  May and June are the months when alligators mate in Florida and on our property it's also the time of year when a young gator  - seldom more than one - makes an appearance in Hour Lake.

The yearly sighting always has similarities such as the alligator's size, which hovers between four- and five-feet long, a size corresponding to a 4- or 5-year old reptile.  A gator of that size has not yet reached sexual maturity but is too old and large to remain with its clutch of reptilian brothers and sisters. It is ready to go out on its own in search of new habitat and feeding grounds.

Although the immature gator may still be about a year away from being old enough to mate - alligators mate when they reach about six-feet in length - it is big enough to be taken seriously, especially if it shows signs of acting aggressively toward people.

Over the past 25 years, we've only had to call in licensed Florida trappers on three or four occasions and each time, the hunters have been successful at capturing and removing abnormally aggressive animals.

Fortunately, most alligators that have frequented Hour Lake have not paid us much attention. Although some have seemed curious about who we are and what we're doing swimming in "their" lake, their reptilian focus has usually been more centered on the fish and turtles that provide them with sustenance than we humans, who are really their only natural predators.

However, especially with our young grandchildren now playing in the water as well as Ralph and me taking the occasional dip, that doesn't mean we should let our guard down.


During May and June I am especially attuned to alligator movement.  When I'm here and I spot one, I go out and watch it, waiting to see if the toothy critter swims away when it sees me or glides closer. Most alligators that come toward people don't do so out of instinct to attack but because some foolish person has fed them in the past.  Like any wild animal that has learned to equate human beings with edible handouts, an alligator that has been fed by people replaces natural reticence with abnormal aggressiveness.


Yesterday, as I was sitting down by the lake in the early evening, the young gator that I've been watching recently left the mid-lake peat island where it had been resting to glide slowly toward the shore.  Fortunately, it glided away from me instead of directly toward where I was sitting - a good sign that it is probably not going to be a candidate for removal.  Nonetheless, I resisted going for a dip to cool off.  Sometimes it's better to err on the side of caution rather than tempt fate by throwing caution to the wind - or, in this case - to the water.