Ants in pants? Not yet. But everywhere else

And invade they have. Over the past 13 years, tawny crazy ants, which are native to South America, have infiltrated Texas, Louisiana, Alabama and Mississippi. In Florida, they have spread through 27 of the state's 67 counties, including Lake.

About a year ago, brigades of the brazenly aggressive insects, identified scientifically as Nylanderia fulva, took up residence in and around our house. What initially looked like mounds of brown dirt on our garage floor turned out to be masses of 1/8-inch long, reddish-brown ants.

That disturbing discovery caused us to look elsewhere. Our findings were even more upsetting. Not only were ants in the garage, we also found them in the gardens, the lawn and along the lakeshore. They were even in the house. To combat the problem, we hired a pest control company. Yet, the ants keep coming. We have managed to keep them out of the house but have been unable to quell their outdoor presence.

Unlike most ant colonies that have one queen, tawny crazy ants serve multiple queens and aren't picky about where they nest. Instead of excavating their own holes, they seek out any available existing cavity or space into which their large colonies can fit. They especially like warm, moist locations, which on our lakefront property is just about everywhere.

They are called crazy ants because they act erratically, traveling helter-skelter in search of food. These voracious omnivores eat the sweet parts of plants and also "milk" aphids, mealy worms and other insects that secrete sugary substances. They have been known to destroy entire honeybee colonies, eat baby birds and decimate populations of native insects.

On the positive side, they also wipe out fire ant colonies, although I'm not sure the tradeoff is worth it. A careful person can avoid contact with fire ants but once tawny crazy ants invade property it's impossible to walk outside without the little buggers crawling up your legs.

Although it hasn't happened to us yet, one of the most detrimental results of a tawny crazy ant infestation is the destruction of electronic equipment. These particular ants have a propensity for short circuiting electronics. They have been known to wreak havoc on air conditioning units and damage transformers, car engines and appliances. Even computers and cell phones have fallen victim to the tawny-colored devils.

Tawny crazy ants have no natural predators and don't respond to normal ant bait. Cold weather deters them but in Florida, where winter is short and rarely severe, populations rebound quickly when spring rolls around.

The pest control company we hired has worked diligently to tackle the problem. Chemical compounds have been applied and while each application provides temporary relief, the ants inevitably recover and come back in full force.

Anyone who has ever felt insignificant should pay attention to the tawny crazy ant. One ant alone is inconsequential, but put that single ant in a colony with a million other small beings and an insurmountable powerhouse is created. They are living proof of strength in numbers.


On the lighter side...
Just saw this drawing by cartoonist Isabella Bannerman.  I added it to end this post on an upbeat note. 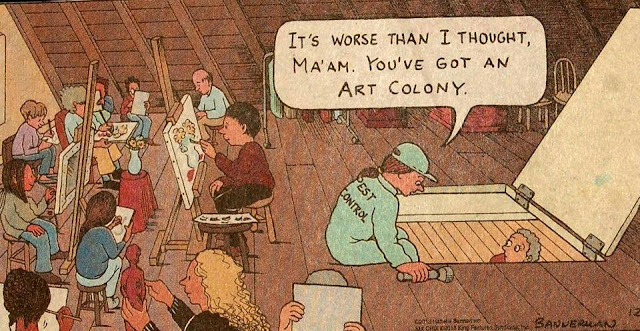